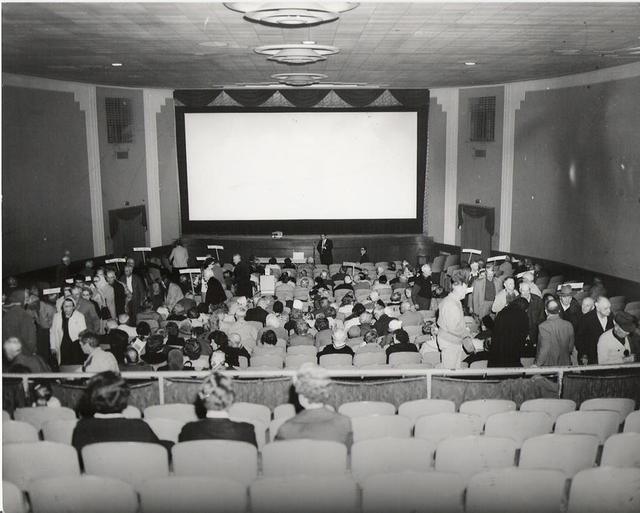 The Go-Sho Theatre was opened November 24, 1947 with Don DeFore in “It Happened on Fifth Avenue”. On November 11, 1959 it was renamed Crest Theatre. It is the only surviving theatre of the original five that once lined the streets of Clinton. It has an impressive two story yellow stucco like front with a rustic wood and metal around the poster cases one ach side of the entrance. The second story has a wood shingled awning over the center windows and wood framing around the upper windows on each side. There is a thin rounded awning type marquee with no attraction panel but there is an upright sign with Crest on it. The lobby is nice an spacious and brightly lit with a good size concession area. The auditorium is nice and clean but rather plain. Seating was provided for 612 as a single screen.

It was later converted into a triple-screen cinema, closing in March 2003. It has since been renovated as a live theatre.

The Crest Cinema closed as a movie theater in 2003, but is being renovated for live performances by the Heartland Communuty Theater. You can see both old and new photos of the Crest at their website:

The 750-seat Go-Sho Theatre opened on November 24, 1947 with “It Happened on Fifth Avenue in downtown Clinton, Mo. The theatre architect was Robert Boller and was opened by the J. T. Ghosen circuit who named it after himself. The theatre replaced the Uptown Theatre which had been destroyed in a fire in 1946. The original design for the venue by Boller was under the name “new” Uptown Theatre; but Ghosen renamed the project during the planning stages.

In 1959, a contest was held to rename the theatre which was updated. Jerry Hyde chose the Crest Theatre as the name which was in place when it relaunched on November 11, 1959 with the film, “The Big Circus.” That also was the final day for the Lee Theatre. The theatre was triplexed becoming the Crest Cinema 3 before closing in 2003. It was replaced with a larger six-screen complex elsewhere in town.