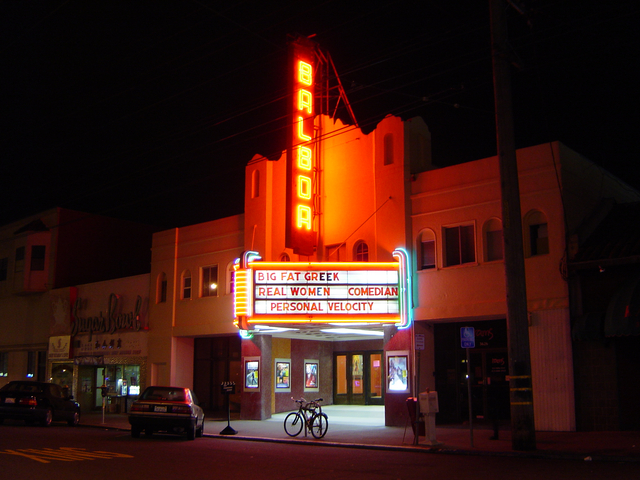 The Balboa Theatre is one of the very last neighborhood theatres still operating in the city. It was built by Samuel H. Levin as part of his chain of neighborhood theatres known as San Francisco Theatres Inc. Opened as the New Balboa Theatre on February 27, 1926 with a seating capacity for 800. It was designed by brothers James & Merritt Reid, renowned architects who also designed the Cliff House, Fairmont Hotel, Spreckels Temple of Music in Golden Gate Park and many other theatres in the Bay area. The Balboa Theatre was remodeled after a 1940’s fire.

By the 1960’s, the Balboa Theatre had very long runs of blockbuster films, at popular prices, including 92 weeks in 1966 and 1967 for “The Sound of Music”, which followed the roadshow engagement at the United Artists Theatre on Market Street. After another fire in 1978, the theatre was twinned, reopening on April 21, 1978.

The theatre was run by the Levin family for almost 60 years until February 2001. At that time the Balboa Theatre, which was showing second-run films, underwent a renaissance thanks to the efforts by the co-owner of Landmark Theatres chain, Gary Meyer, who leased it from the Levin family. Meyer showed quality second-run films at very reasonable prices and his efforts built a buzz around town. He renovated the theatre and included revival and film festival screenings. He later switched to first-run films.

Meyer ran the theatre as a labor of love, but after a decade felt it was time for a change. The master lease was turned over to the San Francisco Neighborhood Theatre Foundation in late-2011 under a lease lasting through 2024. In February 2012 Meyer stepped down from being in charge. Both the Balboa Theatre and the Vogue Theatre are now part of the new CinemaSF organization, as the Vogue Theatre had already been rescued by the San Francisco Neighborhood Theatre Foundation.

reopened as a twin cinema on April 21st, 1978. Grand opening ad in the photo section.

around this area there was shots fired at the balboa high school.

moviebuff82….Balboa High School is in the southern part of San Francisco in the Excelsior District 6-7 miles from the Balboa Theatre which is in the Outer Richmond District.

Did this theater show a 35mm print of OUATIH?

Curious about the SOUND OF MUSIC run? Was this in 35mm and if so was the sound four track mag? I know as the release wound down Fox often still required stereo sound in order to show the film. Anyone have any idea?

From the intro above: “By the 1960’s, the Balboa Theatre had very long runs of blockbuster films, at popular prices, including 92 weeks in 1966 and 1967 for “The Sound of Music”, which followed the roadshow engagement at the United Artists Theatre on Market Street.”

The roadshow engagement of The Sound of Music played at the UA from March 18, 1965 until the week of Dec 19, 1966 (92 weeks) according to Michael Coates' list of SF roadshow/70mm engagements: Here. Is the above inferring it ran for another 92 weeks at the Balboa?

Please update, total seats 375. Theatre 1 is 222 and theatre 2 is 153 based on Balboa Theatre reserved ticketing system

If all goes as planned, the Balboa will reopen on May 14 with a Godzillafest. Local article with more details can be read here.

Thanks for sharing this.