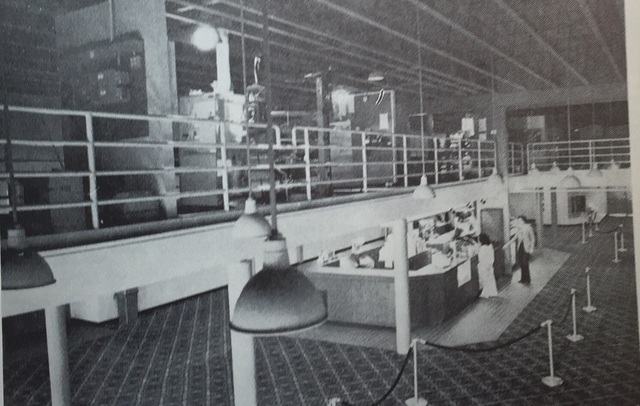 This was my favorite theatre in Portland. I just went back to Portland in May 2004 and looked for it. It was leveled and is now a mall of some sort. It was named after Larry Moyer and Tom Moyer’s (two rival theater chain owners who were also brothers) mother. It was built in the mid 70s and essentially was the place where you saw all the B movies during Portland’s wet (not drive-in friendly) climate. It was also a multiplex without velvet ropes so you were almost encouraged to go in every auditorium and check out all six movies.

It didn’t have an architectual design. Just flat and boxy and went up quick. The place always smelled new. You could also see the projection system from the lobby. All six projectors hovered above the snack bar and the booth didn’t have walls. You could actually talk to the projectionist from the lobby. It was the first time I saw a “platter” system.

I have since gone on to make about 60 B movies myself and currently live in Canada. I blame or thank the Rose Moyer for the many inspirations. Great memories.

Isn’t this theater in Gresham?

Is 165th and Division, considered Gresham? Is so, yes.

Yes, this was a great theater in Portland. I saw a ton of movies there (“Apocolypse Now” “Star Trek”) and only paid for a third of them, as it was so easy to go from theater to theater, and I had no money as a kid. It was built over the former 162nd Drive-In, which had a huge outdoor screen, and was owned by the Moyer family (my mom baby sat for them way back when.) A new theater was built in it’s place and I think it’s a bit better. I even know the manager there who took me on a tour this past February. I know it used to be in Portland and I think it still is. (The border between Portland and Gresham used to be at about 200th, where the train track on Division St. were, but now I think it extends out to Rockwood Plaza, on 182nd and Division.) Ask one the cops in the morning at 182nd Pub during breakfast—they know.

Yes, Mr. Rockwood is so right about “cheating”..haha. It was a ridiculously easy theater to auditorium hop. In fact, if memory serves, my buddy and I had a “two for one” showing of Passage To India and Witness. If memory serves…

I grew up a few miles away from the Rose Moyer so I can clear up some of the debate. The Rose Moyer was torn down in late 1996 or early 1997 and the Division 13 was built on the same site, not down the street. One of my first movie going memories ever is of seeing Ghostbusters here with my family as a 4 year old in the summer of 1984. I can still recall seeing certain scenes on the big screen there to this day when I watch Ghostbusters and I can also recall spending parts of the film on my knees with my face in the theater seat scared. The projectors were indeed visible overhead in the lobby and you could watch them operate and hear them as you walked through the lobby or waited for concessions. There were large green leafed trees that provided shade for parking on hot summer days in the parking lot. As I grew up I saw quite a few movies here such as UHF, Weekend At Bernies, The Shadow, and Star Trek Generations. I even saw No Holds Barred starring Hulk Hogan on opening day June 2, 1989. Hey, give me a break, I was 10 and a huge fan of Hulk so my older brother was willing to take me. In the 1990s Act III acquired most of the theaters and cinemas around the Portland metro area from Moyer. They made several tasteless changes to the Rose in it’s waning years such as cutting down the parking lot trees, and dividing up several of the auditoriums into tiny 50-100 seat shoeboxes to try and pack in more films. It was poorly done and looked like hell. I attended the opening week festivities of the Division 13 in fall 1997. By then I was a senior in high school and they were showing the previous summer’s movies for free. Thus, I sat through a packed screening of Men In Black (the third time I had seen it) with about a half dozen friends. Today, as a film buff I tend to avoid corporate cinemas so I rarely go to the Division 13, an average of once a year, but when I do I still think of the Rose Moyer

The other site lists this as the Rose Moyer 8. Were there eight screens before it was demolished?

Here is a mid 90s lawsuit that discusses some goings-on at the theater:
http://tinyurl.com/5ku6fz

I just discovered this site and I am so glad there are people who remember my grandmother, Rose C. Moyer, and her theatres. She was a grand lady, full of spunk. I have many stories about her because were were very close and I worked in the box office with her. Winnie

My oldest brother was the first manager of the Rose Moyer. I think that was in 1976. Oddly enough, my other brother had been the manager of the Division Street Drive-In which had previously occupied the same location. The Rose Moyer originally had 6 screens. At the time, that was the most of any theater in the state. In the early 90’s it was reconfigured into 10 screens. When the theater first open it was in unincorporated Multnomah county. The area was later annexed by Portland. The boundary between Portland and Gresham along Division is at about 175th. About a ½ mile east of the theater.

@castor801 that’s pretty funny to read your No Holds Barred story, I’m pretty sure I ran that showing. I worked at the Rose at two different times for a total of 5 years started as a soda jerk and worked my way up to head projectionist. Was such a fun job, I was there during the remodel when they divided up the smaller auditoriums and made it a ten plex. Fun times!

Does anyone have a photo of this theater? I work at the Regal that is there now and have heard so many stories about the Rose Moyer when it was there, but I can’t find any photos online of what it looked like. Can anyone point me in the right direction?