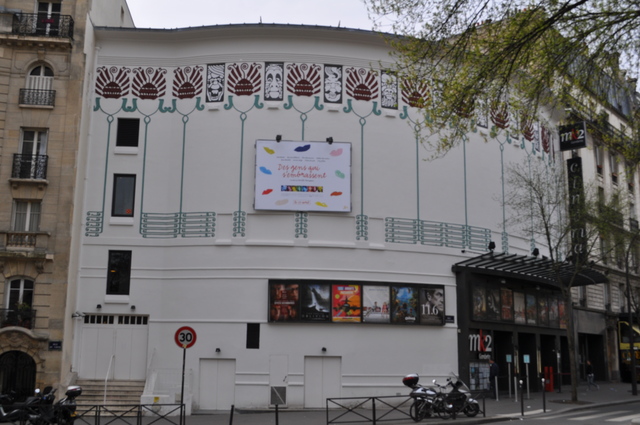 Located in the northeast of the city centre. An older theatre was demolished in 1920 in order to build a new 1,500 seat movie palace named the Gambetta-Palace. Henri Sauvage, the architect, was one of the most famous French architects of the 1930’s. He also designed the Sevre Pathe.

The building has a circular shape and a nice design inside and outside with Art Nouveau style frescos. Seating was provided in orchestra and two balcony levels. The projection booth had a bow window at the ground level under the 1st balcony.

As a neighbourhood cinema, it was run from 1928 by the Gaumont France chain, who altered the auditorium and the façade through the years.

On the 27th September 1972 the Gambetta was triplexed, one 600 seat screen replacing the first balcony. The second balcony became the projection booth and two smallest auditoriums seating 300 & 200 were on the ground floor. Around 1980, a former store in the next-door building was converted to two more screens.

The cinema was run by an independent chain in the 1990’s and the 600 seat screen was improved with a wider screen and a new sound system.

The MK2 chain took control of the Gambetta and after a major refurbishment which included the opening of a bar and restoration of the façade, it has a new look and a policy of first run movies. It is the only movie theatre left in the 20th district of Paris, and the façade is listed.