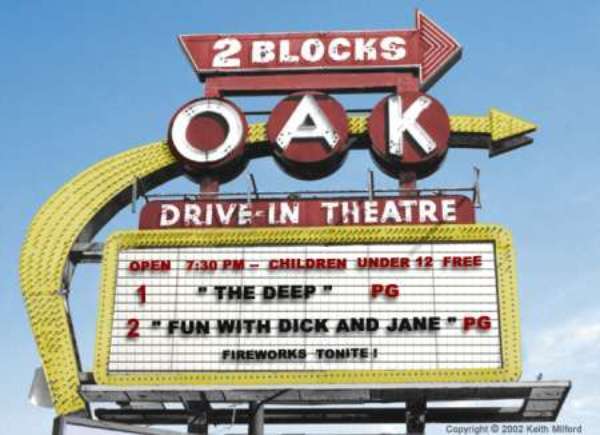 The Oak Drive-In was opened October 19, 1949 with Frank Sinatra in “Take Me Out to the Ball Game”. Although it was tucked back a few blocks from Woodward Avenue, there was a marquee on top of a store on the east side of Woodward Avenue which allowed passer-bys to see what movie(s) was playing.

Here is the current linkto the Oak at Winterwonderland.

Opened October 18, 1949 with “Take Me Out to the Ballgame. The ozoner was by Joseph Miskinis and Alden Smith. The theater drew so many to its 1,000 plus lot that a Manley Stadium Popcorn popper was purchased and the corn popped in the afternoon to better handle hungry patrons. Because it was two blocks from busy Woodward Avenue, two attraction signs were constructed. The first was in front of the theater on Normandy Road and the other on Woodward announcing features with a permanent sign indicating that the drive-in was two short blocks away. One of many drive-in theatres advertising the “World’s Largest Screen” and at 35,000 square feet, it was no slouch.