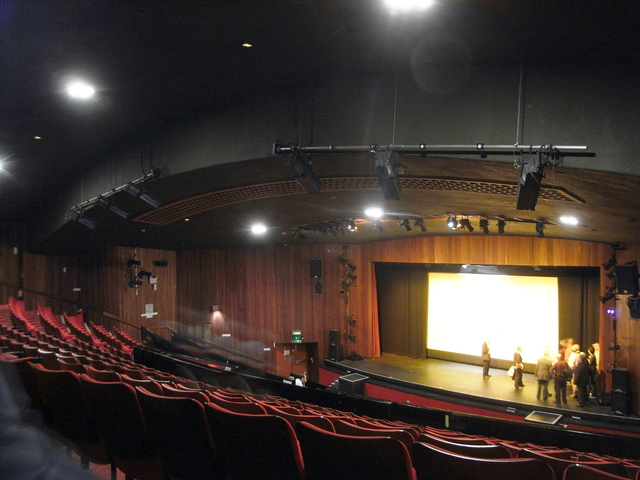 Originally one of the Odeon’s in the Oscar Deutsch chain of Odeon Theatres Ltd. chain. Designed by architect Harry Weedon (assistant architect in charge was P.J. Price), and opening on Saturday 18th June 1938 with seating for 1,450 (900 in stalls and 550 in balcony).

The design was typical of the circuit style, with rounded corners and faience tiling, the main Odeon sign placed above the five tall windows above the front canopy. The opening film was Jack Hulbert in “Paradise For Two”.

The cinema was taken over by the Classic Cinemas chain on 9th December 1967 and renamed Classic. Classic Cinemas triplexed the cinema and it was reopened on 1st October 1971. The circle was extended forward to create Screen 1 with 516 seats and the remaining cinemas were created in the rear stalls seating 273 and 122. The opening film in Screen 1 was Oliver Reed in “The Hunting Party”, in Screen 2 Franco Nero in “The Virgin and the Gypsy”, and Screen 3 offering “Danish and Blue”, this small screen 3 remaining showing sexplotation movies.

As business declined, Classic Cinemas sold the cinema to the local Borough Council which took over in May 1976 now renamed it the Llanelli Film Centre.

The cinema operated as Theatr Elli, retaining its unaltered Harry Weedon exterior design, and continued showing first run films very successfully. It was closed by the Council on 13th July 2012, due to the new Odeon multiplex cinema opening in the towns' East Gate Centre. In 2018 a group of volunteers have obtained planning permission to restore the building into a multi-purpose arts centre, with some cinema use.

The Theatr Elli was designated a Grade II Listed building in October 2009.

An exterior photograph taken in February 1987, of the former Odeon Cinema, Llanelli as the Llanelli Entertainment Centre. Photo courtesy of Jeremy Perkins via the Cinema Theatre Association website:
View link

OOops, sorry, here is the correct link to the above photo:
View link

Ken your links arnt working for theses pics. i havent seen this building for about 20 yrs now so i hope you can get it to work.

It doesnt look very ‘open’ in this shot.

A photograph of the Theatre Elli, in September 2006;
View link

Expect this building to close in the next 2 or 3 years. New plans for a new entertainment centre have just been passed for opening in July 2012.

Seems this important Odeon Cinema is almost ready to reopen ! Hard to find info on the web.
Look up Calon Llanelli on the web or on facebook. Will try to find out more.