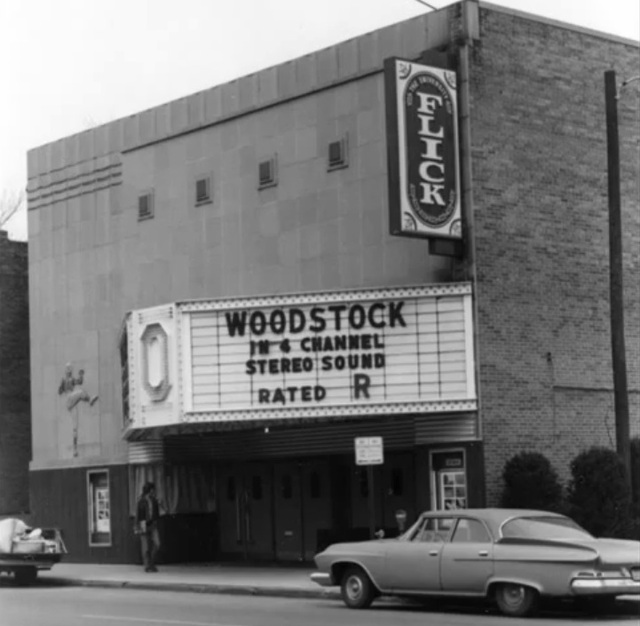 Located across from Ohio State University, the building has a mural of a past famous OSU football player still intact, although the building has been a restaurant and other businesses for several years. The marquee still advertises the current tenants.

The Academy Operating Co. chain opened the University Theater on March 24, 1947 with Larry Parks in “The Jolson Story”. With seating for 1,000, all on a single floor, it was equipped with a Hammond electric organ which was opened by organist Roger Garrett. The foyer featured a mural of Charles W.(Chic) Harley Jr., Ohio State’s first and most famous All-American football player.

General Cinemas acquired and twinned the University Theater in the 1970’s. I remember seeing “Woodstock” and the re-release of “Fantasia” through the smoke ;) before it was twinned. It was dropped by General Cinema in 1980. On June 19, 1991 it reopened as University Flick.

The address was 1980 North High Street.

After reviewing some Columbus Dispatch microfilm archives, I have to retract an earlier statement. This theatre was renamed from ‘University Theatre’ to ‘University Flick’ some time before it was sold to General Cinemas. The chain that owned this theatre, as well as the Northland and Eastland mall cinemas, used a distinctive hexagonal logo in its newspaper ads.

And yes, movies are coming back to North High Street. The ‘Gateway’ cinema, which will be part of the local Drexel chain, is now under construction on the east side of High, opposite 10th Street. It will be next door to the new Barnes & Noble which is replacing Long’s Bookstore next week.

In the absence of High Street movie theatres, OSU students are probably patronizing the 24-screen AMC Lennox Town Center megaplex, just across the Olentangy River from campus. This strip mall has other attractions for students, too: an Old Navy, a large Barnes & Noble, a Target, and a Staples. The local transit authority runs a frequent late-night bus from OSU to Lennox.

While in the Ohio Union this week, I also saw advertisements from the Arena Grand theatre downtown, offering tickets to OSU students for $3.

Neither the AMC Lennox Town Center nor the Arena Grand are listed here at CinemaTreasures.

It looks like the restaurant was Moe’s Southwest Grill, a chain place. This location is no longer on Moe’s website, though. A used record store is currently advertising at 1980 N. High Street.
http://www.usedkids.com/home.html

The University Flick, after being dropped by General Cinema in 1980 became the Movies on June 19th, 1981. Another ad posted.