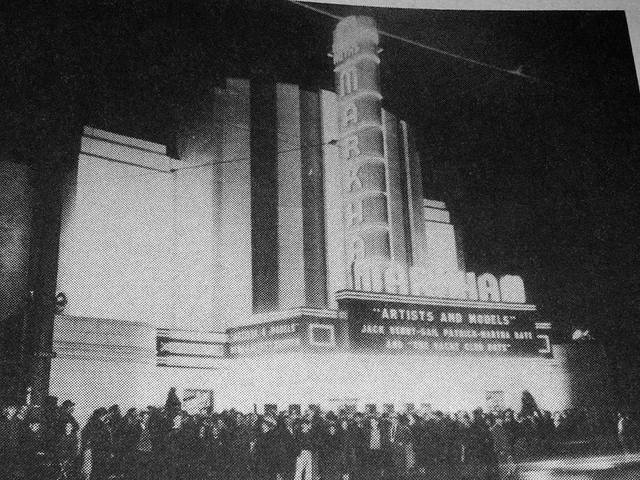 Opened on October 11, 1937 with Jack Benny & Ida Lupino in “Artists and Models”. The Markham Theater was a large neighborhood theater located on S. High Street just south of German Village. The front façade was green and black tiled and the marquee was Art Deco styled. It had no balcony, but private glassed-in screening rooms on either side of the projection booth. I recall one writer telling these were used for crying babies and the like. The auditorium was long and wide.

The Markham Theater was closed in 1969. It reopened as the Adult Theatre on September 17, 1970. It was later demolished for a parking lot for a neighboring funeral home.

In its final declining years as an X-rated house, the Markham was actually renamed to “Adult Theatre”.

I saw a fun movie at this theater in July of 1966 with my brother. I was ten years old at the time. It was “Around The World Under The Sea” and I still even now remember the previews of coming attractions. They were “The Spy With My Face,” a “Man From U.N.C.L.E.” two-parter tv episode and “Hold On” with Herman’s Hermits. It was a Saturday so my dad dropped us off and picked us up after the show.

In 1963, the Markham was part of the J. Real Neth Theater chain. President was Leo Yassenoff and vice president was Milton Yassenoff. Other Neth theaters in Columbus were the Cameo, Clinton, Eastern, Lincoln and State.

It was built for and opened as the Markham Theatre by J.Real Neff. It was originally a first class theatre with fine furnishings an Western Electric Sound. Neff named it in honor of his mother, Markham was her madden name. There was a bronze plaque in the lobby about his mother. The Neff circuit was sold to Leo Yassenoff’s Academy theatres. After Leo’s passing, it was rented to Winston Willis of Cleveland and operated as “The Adult”. The neon was removed from the large vertical sign, painted black and “ADULT” was painted in red. There were two rooms on the second level, one on each side of the booth. The right one was the “hard of hearing room” and had a series of jacks to plug in headsets. The left was the “cry room” where ladies were asked to go if their child was fussy. The screen area was neat. It had a large velour grand drape that opened first revealing a white “title curtain” that was opened when the distributor’s title appeared. It closed at the end of the lease, as the Yassenoff Foundation chose not to renew. It was later demolished and is now a parking lot and green space for the funeral home next door.

In the late 1960s, I drove to Columbus to see a movie (which I had seen years before) that was advertised at the Markham. I was late arriving at the theater. It was past the listed starting time so the movie had already started. When I walked into the auditorium and got my first glance at the screen, I stopped dead in my tracks and even said “wow!” It was the first time I had ever seen an anamorphic widescreen (“scope”) print shown in its full width at an indoor theater. It showed me how much I had been missing seeing films at other theaters. I learned years later that it had become an “adult” theatre. It was sad to learn the fate of such a large and beautiful theater.

This closed in 1969 and reopened as Adult Theatre on September 17th, 1970. Grand opening ad posted.