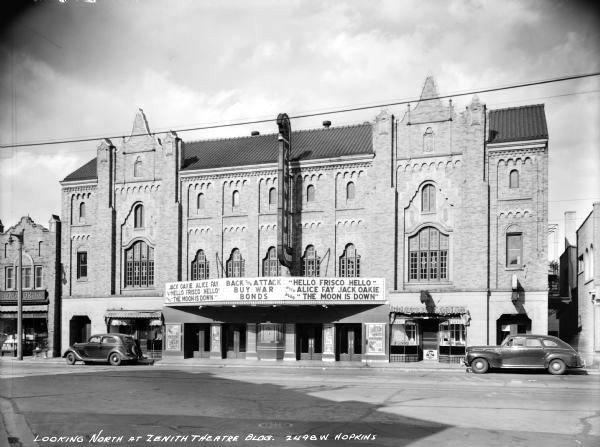 The Zenith Theatre in Milwaukee was perhaps not the absolute zenith of all movie palaces, but in the braggadocio and ballyhoo common to its era, the owners saw it as the top, the acme, the best = the Zenith. As a north side neighborhood house it was a fine design in the Atmospheric style or stars-and-clouds format. It was only one of six such in this format in that city, but that did place it among the 21 theatres there that could be called movie palaces. Local architects LaCroix and Memmler did only this one theatre, but it sported some unusual design elements that brought its 1,360 seats some distinction.

In 1926, the neighborhood of W. Hopkins Street was a bustling Germanic business district, and the son of a local theatres man, Edward Maertz, gathered funding from his business-savvy family to construct a movie house that also sported a bowling alley in the basement (as also did other local movie houses such as the Milwaukee and the Oriental) as well as two store fronts to help defray the costs of operation. The Maertz family did not skimp on this then outlying venture, in that they created a three-story facade of mottled brown brick trimmed with distinctive window caps of triple-corbel arcades in limestone. The front westerly facing facade was divided into five bays with the second and fourth being extended outward and framed by piers rising to a fourth level above the third floor level. Between these four piers at the fourth level was a mock gable face with inset terra cotta ornaments in the form of panels featuring torcheres of knowledge. Flanking vertical moulds of buff terra cotta carried similar orb finials to the coping line, with the flanking pier caps having grille pattern panels terminating them. Behind this fourth level was the down slant of the Spanish tile mansard roof. Further carrying out the Spanish style of the building was the entire first floor facade veneered in rusticated limestone blocks, with the island box office between the four sets of entry doors being on the sidewalk line. There were, no doubt, a fine marquee and vertical sign characteristic of 1926, but no photos are known to exist of that day, and only 1943-era photos of a latter day operator show the then fluorescent-back-lit marquee and Art Deco ’S' shape of the curve of the vertical sign in neon reading ‘Zenith’.

Behind the box office was a very shallow ticket lobby with another set of four doors, this area really acting like an ineffective air lock before one entered the grand lobby. Some attention to detail was evident here though, with a ceiling in rough cast plaster in the form of groin vaults springing from up-lights at the tops of rusticated piers between the door sets. The real ornament was the floor, with an intense design of squares of white ceramic tiles in a tight Greek key design bordered by rectangles and diamonds also in white tiles against black tiles.

Entering the modest single story grand lobby one’s eye was no doubt first drawn to the most unusual feature in this more modest theatre: a lobby fountain in the form of a fish pool centered in the floor, above which a flying staircase formed an arc as it ascended through a well in the ceiling to the balcony lobby floor above. Adding a touch of distinction that no other Milw. theatre had was the fact that this flying staircase was outlined on its underside arc by means of white neon (cold cathode) tubing; this is shown on a 1938 photo, so it is not entirely certain that such opened with the theatre twelve years earlier. The rough cast plaster walls and ceiling of this room were otherwise unremarkable, but again it was the intricate ceramic tile floor patterning that was the ornament, with white tiles as Greek key patterns this time forming the border, while the major area was conjoined quadruple-outlined rectangles in four shades. By the time of this photo, the couches were in black leather with brass nail head trim, but the original wrought iron candoliers still adorned the walls along with various poster cases framed in dark wood.

When one entered the auditorium, it was under the shallow ‘shelf’ balcony that did not have the usual flood lights on its front facing the stage that most other atmospherics had, in lieu of the ceiling ‘beam’ floodlights that the traditional theatre format had but which was impossible in a starry sky design such as this, of course. One probably first noticed that the side lines of building fronts above the flanking side wall arcades were not identical, and this asymmetrical design did lend a more authentic note to the Spanish courtyard feeling. What appeared to be large French doors with matte glass panes, were in fact the scrim cloth filled frames fronting the organ chambers where the pipes of the Kilgen theatre organ of unknown specs resided. The tiled rooflines of these facades were surmounted by copings sporting glowing lanterns of cobalt blue glass in the forms of ellipsoids seated in brass skeleton frames, and, along with the blue horizon lights flooding the ceiling with midnight blue, were perhaps the most memorable elements of the decor. In the ZENITH, unlike other atmospherics, this horizon lighting was not a simple strip of blue bulbs squeezed between the outer plaster vault and the backs of the building fronts allowing only a rudimentary glow to suffuse the walls; here it was full scale floodlights behind the balustrades of the facades line but in front of the facades, cast upon the inner reaches of the blue plaster sky vault that provided for more realistic and even illumination, the only disadvantage of this being that they were fully visible from the balcony seats (apparently, their tubular housings prevented glare to those in the balcony). Murals of a tree-lined Spanish countryside behind the facades completed the vista. The wide rectangular proscenium mock facade was enhanced by four small, illuminated niches, two on each side, each covered by a tiny canopy above and balconnette below with greenery inside. The footlights shown upon a rather simple house curtain of a dark velour trimmed at bottom with a 10-inch fringe and a border above that. The grand drapery, such as it was, was a rather free form of six somewhat unequal swags of large, muted stripes which contrasted sharply with the house curtain. A fully rigged stage and dressing rooms, etc., allowed for the talent nights so popular there in early days in addition to the mainstay of movies, of course.

While the Fox chain had taken control by 1938, it was not enough to continue films by 1954 when it was clear that audiences preferred to stay home for new, free TV. A church bought the theatre at that time, but did retain many of its features, possibly also keeping the Kilgen organ, a brand more known in churches than theatres. The church did remodel the facade, covering the two store fronts and the remainder of the first floor facade with a faux stone and removing the marquee, but replacing the vertical sign with an equally large cross-shaped one reading in white neon: JESUS SAVES. Other white crosses covered the terra cotta ornaments, and the bowling alley was closed for good, the lobby fish pond was gone, and the stars no longer twinkled, but at least this memory of one of Milwaukee’s more unusual palaces continues in this form to this day.

Mike, this is nice to know, especially if we can confirm it. That may be possible next summer if you can go to the Theatre Historical Society’s convention in Milw.; see details to appear on their site at: www.historictheatres.org The former ZENITH will be toured at that time, but my health does not permit me to go, so we all will have to rely upon you to investigate then.

Did you know that Larry Widen’s long-awaited sequel to his 1986 Milwaukee Movie Palaces is now out at: http://tinyurl.com/jlvmu ? I haven’t seen the book yet, but I doubt he will mention a Violano Virtuoso unit even if he knew about it, but that would have made a nice tidbit for his book. I have only seen one such Virtuoso unit playing: at the House-On-The-Rock west of Madison many years ago, and found it and the music it was playing fascinating!

If you are in the So. Wis. area and would like me to put you on my Local Theatres Buffs list for the occasional bulletins I send out, click on my name in blue below and find my address under CONTACT and e-mail me your address.

Thanks, Jim. I’m actually in upstate N.Y. and also probably will not be able to make the THSA convention (unfortunately). I will check out Mr. Wilden’s website as see what I can find. I apprerciate the info.

I have been told that a FULL COLOR antique rendering/painting of the auditorium has appeared, for sale, at Riverview Antiques shop here, at 175 S Water Street. It is said to be “absolutely breathtaking” by Hugh Swofford, so not only are such renderings rare, but in this case, beautiful as well, but at an asking proce of $680 it should be. Of course, no price is cast in stone, so one might get it for a lot less. It is already framed, but dimensions were not known. It may have made an excellent color cover photo (or 2-page spread, or foldout) for Larry Widen’s new book about Milw. theatres: “Silver Screens,” but perhaps he hadn’t seen this. If you’ve always wanted a genuine antique architectural painting for your wall, don’t pass up this rare opportunity! (Then someday you could photograph it and post that image here!)

This theatre became a church in 1954. It is now run by Pastor Lewis. The building is in need of work and repairs. The church will gladly accept donations to help in this.

In 1945, the Milwaukee directory listed the Zenith at 2498 W. Hopkins, as opposed to North. I don’t know much about Milwaukee geography, so perhaps someone knows if Hopkins runs north-south or east-west.

Here is the church site:
http://tinyurl.com/6k3kn5

Oldest ad is at View link