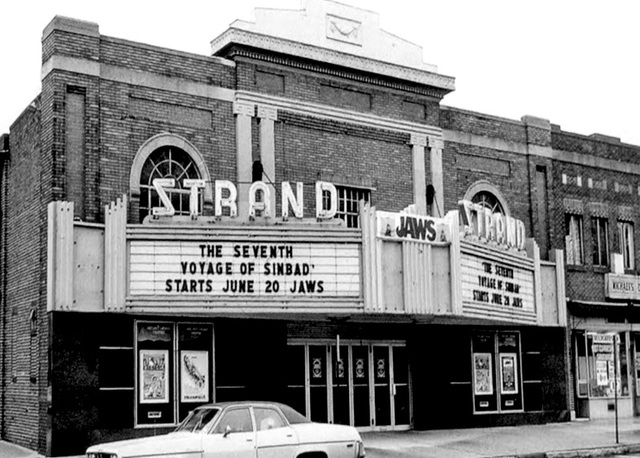 The Strand Theatre opened in 1938 seating 816. With a small town atmosphere and located on the main shopping strip of Dundalk. The front of the Strand Theatre was rather striking with arched windows above the marquee and a large pagoda topping the center of the building at roof level.

The marquee of the Strand Theatre was what really made the theatre stand out. It was a large triangle shape, with tons of neon. Each side of the marque had large neon letters spelling out “Strand”. There was also neon that lined the underside of the marquee lighting up the sidewalk and the entrance to the theatre.

The Strand Theatre continued to show movies until 1988 when it closed. The building is now a store and the marquee has been completely painted over in a bright fire engine red with the name of the store on each side. Standing across the street in the park looking at the building there is no doubt that the Strand Theatre once graced the corner.

It saddens me to see something as beautiful as the strand not be renovated and restored like the Hippodrome and the Senator. It was what movie theaters were all about. I have a lot of memories from The Strand. She was a sight at night when lit up. Yeah, you can watch DVD’s, but there is still nothing like going to the movies.

The Strand appears in Barry Levinson’s great 1982 directorial debut, “Diner.” It’s the theater where Mickey Rourke’s character, Boogie, tries to win a bet with his pals concerning how far he can get making out with the beauteous Carol Heathrow during a screening of “A Summer Place.” In a scene shot outside the theater as the audience departs, Billy (Tim Daly) spots old high-school enemy Willard Broxton and punches him out, as revenge for a grudge going back to the 10th grade. The Strand’s marquee and neon-lit name can clearly be seen a moment later, in a long shot as Shrevie (Daniel Stern) explains the Willard Broxton incident to Beth (Ellen Barkin) as they walk away from the theater.

Actually, the Strand closed in ‘85 or '86. In 1993 it was gutted for transformation into a sports bar, which didn’t catch on. It’s now a dollar store.

Also, in 1982 the left-side balcony was converted into an obscenely small theatre. Its sound system was a beat-up home stereo speaker placed on the floor in front of the screen!