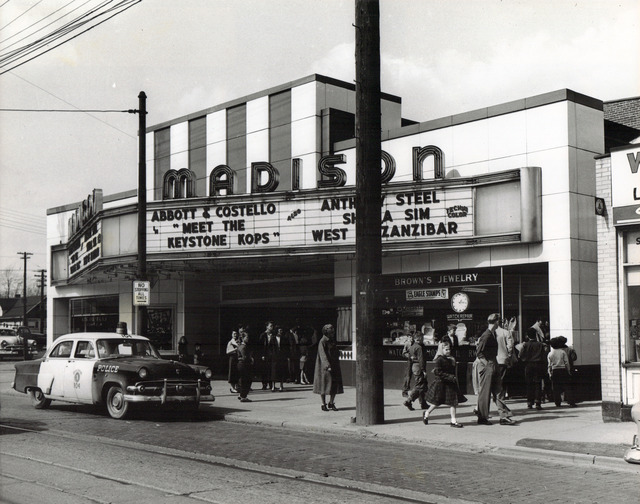 This was a neighborhood theatre that opened in the 1940’s and closed in the mid-1980’s. It was owned by part of a syndicate who also operated the Mayland Theatre, the Lorain Fulton Theatre and the Parma Theatre among others.

A lumber yard business occupies the former theatre now. The lobby was demolished, but the auditorium is being used as a storage area for lumber.

There is a small photo on the lumberyard site:
http://tinyurl.com/5wo47e

The Madison Theatre in which the organ was installed in 1921 (noted in Lost Memory’s first comment above) must have been a different theater, perhaps a predecessor to this house. This Madison Theatre opened September 1, 1949. Boxoffice of September 10 that year said that the new house for the Modern Theatres circuit (formerly Scoville, Essick & Reif) had been designed by Cleveland architects Matzinger & Grosel.

The Cleveland Landmarks Commission’s list of building designed by architect Nicola Petti includes an unnamed theater at Madison Avenue and W. 103rd Street, dated 1917. As that was only a few blocks west of this theater, perhaps it was the Madison Theatre that had the organ installed in 1921.

However, there was an earlier Madison Theatre, a 200 seat house opened in 1907 at Madison and W. 72nd Street. It seems unlikely that a 200-seat house would install a large organ, but the theater might have been expanded by 1921.

Wow, Talk about bringing back memories. My brothers and I use to go to the Madison Theater every Sunday. as we got older every Saturday!

I remember this theater— I saw Willy Wonka and a bunch of Peanuts movies here when I was a really little kid. I still remember what it looked like inside, with the concession stand at the top right before you’d go down the aisles into the seating area. You could stand up there and watch the movie while you bought your popcorn.