Opened on February 21, 1968 with James Stewart in “Firecreek” showing on both screens. Each screen had 360-seats. A twin house with windows at the rear of the theaters. Large single concession stand to serve both houses. Although originally built as a traditional RKO twin, the depth of the theatres was subsequently doubled. It was closed in 1987.

I saw that all time classic “who slew auntie roo?” with Shelley Winters there!

I SAW “THE GREEN BERETS”,“WILL PENNEY”,“AIRPORT”,“THE ODD COUPLE"AND MANY MORE.IT WAS A NICE THEATER BUT I THINK THEY WERE STARTING TO BUILD TOO MANY.THE INDUSTRY WAS SAYING TICKET RECIEPTS WERE DOWN IN THE LATE"60’S, BUT THEY BUILT MORE TAKING AWAY FROM THEATERS LIKE THE BABYLON THEATER.

Of the existing Long Island theaters there are very few from the early days and these have been chopped up. Now they build multiplexes with a dozen or more auditoriums but many seat fewer than 50 people. Except for the big, splashy movies you should just wait and see it on your home theater screen for a third of the price you’d pay.

AMEN,ROBBEOHM,YOU CAN EVEN BUY THE DVD FOR THE PRICE OF THE TICKET.

I remember seeing “Return of the Jedi” here during the film’s opening weekend in 1983. (I just realized I may be accidentally posting this almost exactly 34 years later.) I arrived early for my chosen show time… and was startled as I was driven past on Montauk Highway and into the parking lot to see a line outside that I then had to wait in for the duration of the screening to thankfully get in to the next one. The sky was overcast, and it drizzled for the last twenty minutes of the wait. I joked to the fellow kid behind me about our dedication, and we conversed to pass the remaining time. I then sat with him during the show, and he used his fingers to somehow help his eyes squint because he had recently lost his glasses.

I sort of recollect maybe a lot of dark red in the lobby’s décor. Yes the auditoriums were narrow enough that I felt subconsciously prompted to sit closer to the screen.

I also saw the original “Ghostbusters“ here, and another film I can‘t recall.

When part of the front of the theater became a Blockbuster Video I thought that was ironic: the theater is gone but you can still consume films by renting them from there, including perhaps some older ones that had played at the theater.

The former entrance and lobby of the theater/former Blockbuster and F.Y.E. music store is now Davis Visionworks. The rest of the theater structure is now a GNC, a Weight Watchers, and a Carter’s kids clothing store.

In pre-2015 Google Street View images there are two vertical blue steel beams in front of the building at the corner of Montauk Hwy and Brookvale Avenue that I believe held up the marquee if memory serves. They have been replaced by a sign showing what businesses are in the Great South Bay Shopping Center.

My late father once told me there had been a pond upon which he used to ice skate as a kid during winters in the 1930’s, that was filled in and replaced by the A&S (Abraham & Strauss) department store (now National Wholesale Liquidators) in the corner of the shopping center at the time the property was developed. When visiting the place while growing up I’d contemplate that – my father at my age, and a more rural version of Long Island I hadn’t experienced.

Back when the cinema existed the shopping center also included a Woolworth’s store with a diner I had eaten at with my mom, a French restaurant (Le Petite Chateau?) to which my high school French class took a lunch time field trip, and a Chinese restaurant, gone before I was old enough to know of it, where my parents said they had some of their early dates.

Bed Bath and Beyond was Martin’s in the day.

I will always remember this theater… I saw Star Wars there in 1977 when I was 6 years old. I remember seeing Young Frankenstein there as well. My parents grew up locally and that shopping center was their “hang out” as teenagers. I remember getting most of my Star Wars figures at the TSS Store (K-Mart decades later) across the street or the Service Merchandise catalogue store in the next shopping center over.

rivest see my much earlier comment that the original opening in conjunction with the Rockville Centre and Commack Twins was delayed for lavish finishing touches. At the time there wasn’t even a roof on the structure. 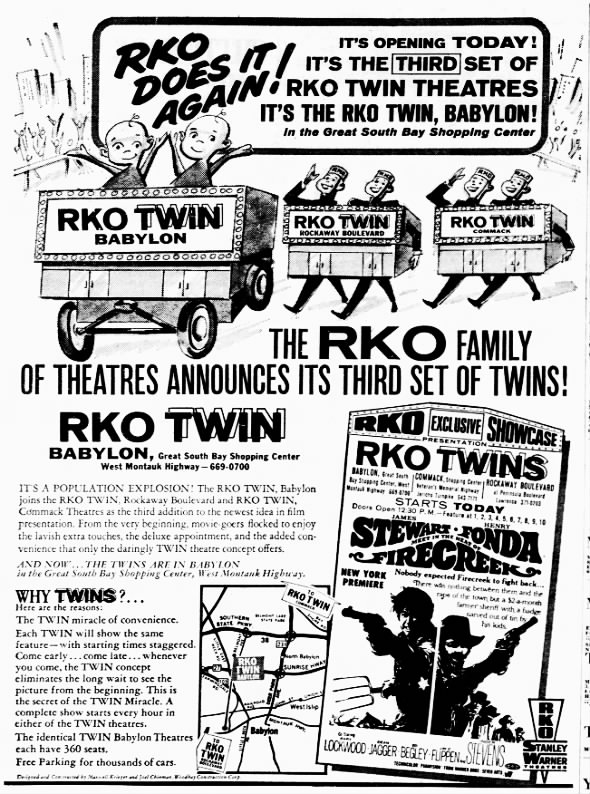