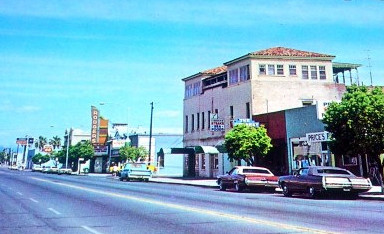 Art Moderne doesn’t exactly describe this building. It’s a good sized, flat-fronted stucco building with an arched roof. The street level has an interesting green and beige tile design, and the marquee is very nice for a small town. I’d say the present look dates from the 1940’s.

The Rodgers Theater was closed as a movie theater in 2006, and is currently being renovated to serve as a community center.

Here is another photo:
http://tinyurl.com/yzz6wa2

This theater is closed and has been for at least 2 years.

I’m reading several sites on the Rodgers. In 1990, I both lived in Corning and had a small department store right across the street from the Rodgers. At that time it was closed, but the city and someone had plans to reopen the theatre (I thought as a live stage theatre; and not a duplex). I moved away before it was reopened and not seen it since. I hope that what I just read is not true “closed”.

The Rodgers Theatre has been closed since 2006. The most recent article I can find about it is this one from the Corning Observer of January 31 this year. It says that the renovations are proceeding, and at that time new bathrooms were being built.

The Rodgers Theatre was donated to the City of Corning by Daniel and Wealthy Rodgers in 1991, along with an endowment of $50,000 toward its maintenance. The current renovations are being paid for by funds from various sources, including grants, municipal funds, and donations. The goal is to convert the building into a community center with a movie theater included.

The article says that the Rodgers Theatre was built in 1935. Unless information has been lost over the years and it was actually built earlier, that means the house would not be the 1928 project mentioned on the California Index card that I cited in my comment of September 26, 2008.

The Rodgers Theatre is presently in the process of renovation for the purpose of being turned into a community center. Assistance is apparently being provided by the City of Corning, the Corning Community Center and lots of volunteers.

The most recent news I can find about the Rodgers Theatre is on this page of the Rolling Hills Casino’s web site, and is dated January 11, 2016. The Paskenta Band of Nomlaki Indians and the Casino Foundation have pledged $100,000 for the theater’s renovation, to be disbursed over three years.