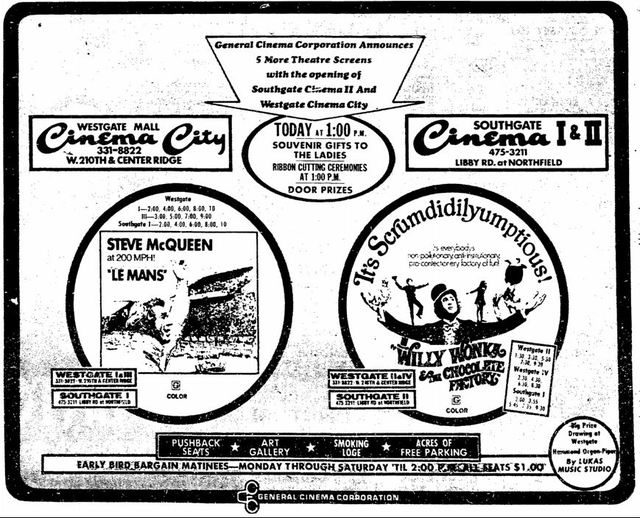 This four-plex opened in the Westgate Mall in Fairview Park in 1972, and closed in 1986. The space where the theatre was is now the food court at Westgate. After GCC closed this four-plex, they opened a free standing six-plex on an out lot adjacent to Westgate Mall-that theatre is still in operation by AMC.

Heard a rumor that Parmatown Mall was also open-aired until roofed. Is this true? If so, was the theatre there before or after the “roofing?”

Yes, Parmatown was open-air. up as far as The May Co. When they roofed it over they also built the area where the Cinema and Higbees was. That section you’ll notice has no posts holding the roof up like the other areas of the mall where the roof was added.

The entire Westgate Mall (less Kohl’s) including the newer GCC/AMC Westgate Cinema 8 has been demolished. The cinema is a pile of bricks. AMC operates an identical cinema ¼ mile away called the Westwood. Never understood why GCC built two different theaters so close as they are of similar age. Rumor has it that AMC is planning a big multiplex in the the Westgate Center.

I work for AMC at Ridge Park Square and I haven’t heard anything about a new Westgate Theatre (although that’s not to say that what you heard isn’t true).

I have many fond memories of going to the Westgate in the 70s when I was home from college in the summer. I seem to remember more than 4 cinemas however. Werent more added as time went on? Sorry to hear it’s gone. The mall too! Awful.

This opened on June 30th, 1971 with the second cinema of the Southgate. View link

Thanks for these ads MR – the CT page for the Westgate 6-plex is located here: /theaters/7738/