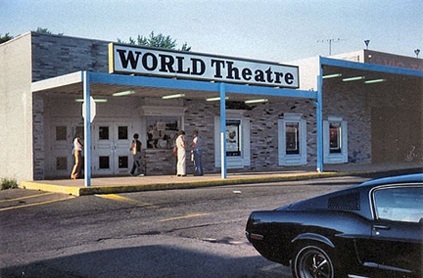 The World West Theatre closed in 1986, and is now retail store space.

This space appears to have been converted into a supermarket.

If you look at the business listings for this address, you get all kinds of stores, drugs, florists and so on. 17400 may be a general address for a large shopping mall. Subsequently the grocery store may not be housed in the old theater building.

The World West was in a space near the corner of the Kamms Plaza shopping center. The space where Rego’s Fresh Market is, was always a supermarket, since the strip first opened in the early 1960’s… previously being a Tops, and prior to that, a Pick-N-Pay and a Finast.

You can see a photo of the World West Theater at westparkhistory.com

Both the World East (in Richmond Heights) and the World West were rather small theaters, both located in what we now tend to call strip malls; I doubt if either had more than 500 seats. They were very shoebox in design with with simple Soundfold drapery over painted cement block walls. The lobbies were tiny.

I would like to see a picture of this theatre if anyone has one. I believe my mom took me there to see bambi in 1982. If I remember correctly the theatre was in the N/W corner or the shopping center, near where the tower stands now.

There are then-and-now pictures near the bottom of this webpage (scroll down to see them): View link The information there indicates that the theater at its opening had 450 seats.