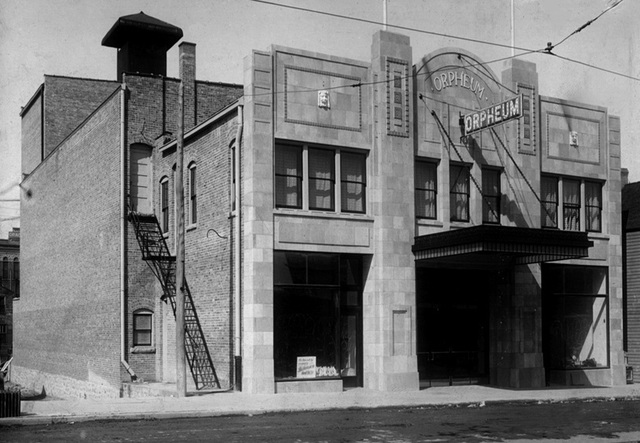 The Orpheum Theatre opened on October 2, 1913 as a vaudeville house and originally had a seating capacity of 900. By 1933 it was operated by Paramount Pictures Inc. through their subsidiary John Friedl. This elegant and beautifully-preserved theatre served in this capacity until 1954, when the Community Playhouse group acquired the Orpheum Theatre for its home.

Known for its superb acoustics, the theater receives over 100,000 visitors each year, and events there include plays, concerts, community events and private rentals.

The Orpheum Theatre is rumored to be haunted by a ghost who has been named named “Larry”, whose identity is unknown, but was thought to have been either a construction worker or stagehand in life.

The Orpheum Theatre was added to the National Register of Historic Places in 1983.

I used to go to the Orpheum when I was a boy in the early 50’s My dad would give me a quarter,and the ticket was 10cents,popcorn was 5 cents a box,I would get two boxes,and have 5 cent left to call my dad to pick me up.
They would show great Bmovies like “The Bowery Boys”,“Johnny Mack Brown” westerns. I treasure thoughs times
Cosmo

I found the Sioux Falls Argus Leader news clippings that talk about the Oct. 1913 opening of this theater. The historic plaque also says 1913, and a history book about Minnehaha County pictures the building, showing the 1913 date, too.

On October 2, 1913, the grand opening of the Orpheum Theatre was a full
dress affair with box and dress circle patrons paying the unheard price of $5 per
seat. First Nighters were entertained with a concert by the Orpheum Orchestra,
four vaudeville acts, screen projections of Pathe News, and short subjects from
the Orthoscope, the latest in silent film equipment.
Brothers John and Frank Solari built the 1000-seat Orpheum, and planned it to
be a state of the art theater for the staging of vaudeville. A railroad spur led to
the theatre back door, which enabled performers to unload their animals, props,
instruments, and wardrobe trunks.
In the early 1920s repertory theater became popular at the Orpheum. Stock
companies performed the current play for one week; at the same time they
rehearsed a second play to be performed the following week. â€œTalkies,â€ movies
with sound, and the sale of the Orpheum to a competitor, led to its temporary closing in
1927.
The Orpheum was listed on the National Register of Historic Places in 1983.

Community Playhouse went under, there was a dark year or two before a new group, Sioux Empire Community Theater (SECT) began producing three shows a season, the third being the 2005-06 season.

“We’ll leave the light on for ya..” The Orpheum neon sign is turned on every night, but there was no performance when I was in Sioux Falls. The Orpheum is the first thing mentioned by the local tourist bureau when talking about their restored downtown. Jessie, a tour guide, said the interior is seriously run down; but I’d be hopeful the local citizens will fix it up in the longrun.

In the photo I doubt that these are the original doors..too bad they changed them out, imo.