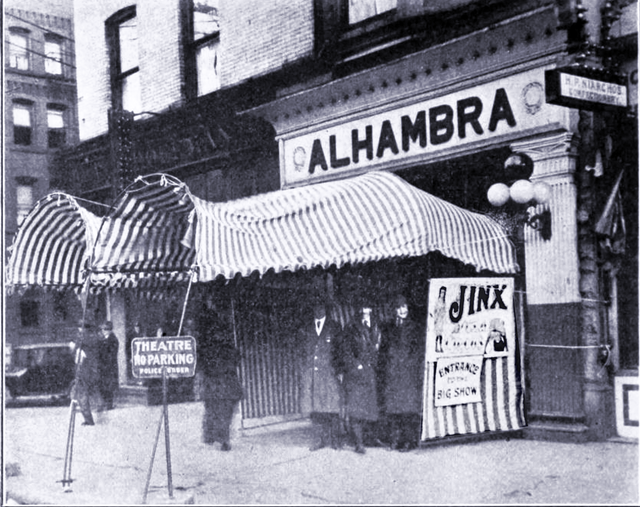 Built in 1913 by lumber dealer Phil Bernower and Valentine L. Ney. The Alhambra Theater was opened on June 19, 1913 with Albert Egbert in “The Temperance Lecture” & Geoge Siegmann in “Half a Chance”. It ran silent movies, and had an orchestra, the Bernower Orchestra. Following the installation of HVAC system on July 10, 1936, it was renamed Ohio Theatre and was operated by Warner Bros. Circuit Management Corp. It was damaged by a fire in 1969. Repairs were carried out and it reopened as the Reinco Theatre.

In the 1920s, the Alhambra was operated by the Variety Amusement company, a large regional circuit operating mostly in Ohio and western Pennsylvania. In the mid-1930s, the Alhambra was taken over by Warner, and was renamed the Ohio Theatre in 1936 or 1937.

The Ohio Theatre continued under Warner or Stanley Warner operation until 1965, when the company was granted permission by a Federal judge to build a new theater at Canton provided they gave up the lease on the Ohio.

In 1965, When Stantley Warner opened their new McKinley Theatre, the Ohio was taken over by Reinco Theatres, operated by members of the Reinhart family, who had been in the theater buisness in Canton since at least the mid-1920s. Under Reinco management it was a first-run house.

In 1969, the Ohio Theatre was severely damaged by fire, but was restored and reopened by Reinco, still operating as a first-run theater.

I had Boxoffice citations for this information, but the crappy laptop I’ve been stuck with for the last couple of months devoured the whole post before I could submit it, and I don’t feel like looking everything up again.

On the Plaza Theatre page, Chuck gives the address of the Ohio Theatre as 332 Market Avenue North.

The Alhambra theatre opened on June 19th, 1913, as “The Theater of Suprises” with “The Lecture” and “Half a change”. Grand opening ad posted.

This was renamed the Ohio theatre after the installation of the new HVAC system on July 10th, 1936, with the formal reopening held on the 22nd. Another ad posted.