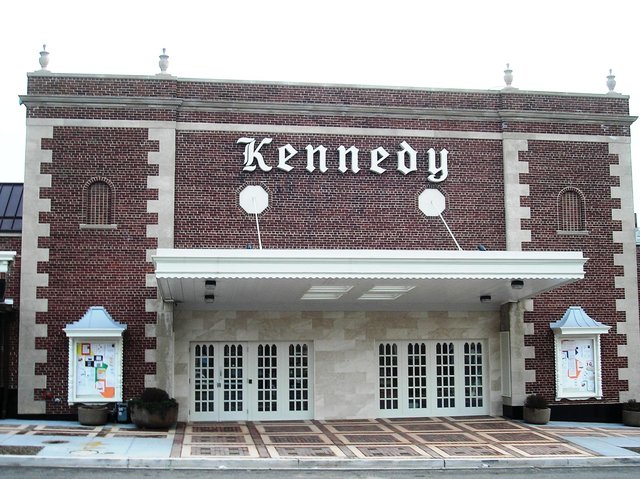 The Kennedy Theater, one of a number of John Eberson-designed Washington movie houses, was opened June 15, 1939 by Warner Brothers Circuit Management Corp. and the opening movie was Bette Davis in “Juarez”. It was located on Kennedy Street, near 3rd Street. The Kennedy Theater closed in 1974 as a theater. It most recently was home to a church.

All but the facade has now been demolished, and the facade now serves as the entrance to a new building.

hi. my family loved to an area near the kennedy theater in 1959. the area was in the process of full out white flight, but it was not, as rlvjr indicated in hos comments of july 23rd of last year, gone from “bad to waaaaay worse” in the 50s… the comment smacks of-well, need i say more? like many urban centers, the neighborhood did change for the worse by, say, 1969 or so… but i spent many a carefree, SAFE afternoon in the theater, and the surrounding environs…

Welcomed by the Hon. Melvin C. Hazen, president of the Board of District Commissioners, and D.W. Gabelin, president of the Chillum Heights Citizens' Association, to a thickly populated residential section of northwest Washington, heretofore without its own neighborhood motion picture house, the Warner Brothers' handsome new Kennedy Theater last night threw open its doors to the public.

Here, here, and here are photos from February 2008 of the former Kennedy. Although the faÃ§ade is in immaculate condition, the interior has been completely gutted and converted into some sort of community/residential centre.

This is a 1984 short film by John Heyn that shows the Kennedy and other Washington theaters:
http://tinyurl.com/p6thon

I graduated from Coolidge High School in 1960. During those school years, the Kennedy was the place to see not only movies, but live performances by the likes of Fats Domino and Little Richard. Those were the days, my friend!

Worked This Theater as an Usher in 1963 for aprox 1 year under manager Tony Renaldy spelling may not be accruate. $ 0.75 per Hour. Fun Job.

I used to go to the Kennedy when I was a kid. I remember Tony Rinaldi working the candy stand when they were short handed. Didn’t Tony have a brother who was also a manager?

After closing when Kennedy Street went from bad to much worse in the late 60’s and 1970’s, the neighborhood has bounced back strongly. No fear of crime here these days. The Kennedy Theatre facade looked badly wrecked not so long ago, but they’ve restored the facade (see photo). Behind the entrance, any trace of the theatre is gone, but a beautiful senior center resides there now.

I am one of the kids that came to love the Kennedy Theatre as a child even before I was born the Kennedy was where my great great grandparents worshipped as members of the only Church to take over the Kennedy theater Calvary Life Center Church and most of my family as well if the roof would have been repair by the owner of the Kennedy we would still be there but the roof caved in back in 2001. And me being born in 1991 til now I still love the outside and the memories