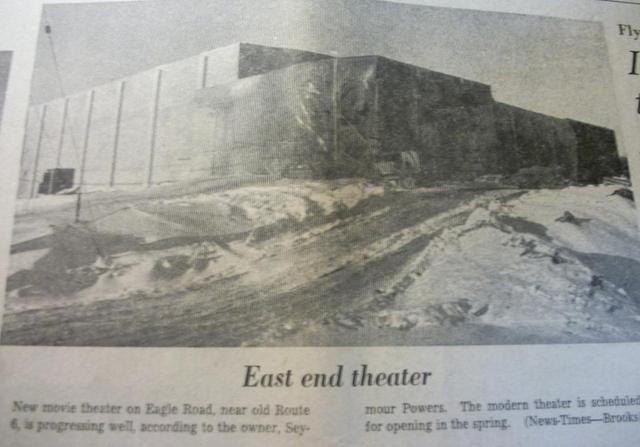 This theater was destroyed in September 1999, as I remember the last thing I saw posted up on the board was “Star Wars: The Phantom Menace”. The sign stood for long after that though, and I think it might still be there. The sign, if it’s still there, stands in a Wachovia Bank parking lot, across from Walmart.

Here’s the text of the article since it will disappear soon.

2005-12-12
Crown Cine theater is gone, but why the sign stands is a mystery
By Eugene Driscoll
THE NEWS-TIMES

The News-Times/Wendy Carlson
The Crown Cine sign still stands near Newtown Road in Danbury, although the theater has long since been torn down.

DANBURY â€" The letters look like something plucked out of 1970. It stands heads and shoulders above its neighbors.
Heck, it even has a fan or two on the Internet.

The sign is still there even though the movie theater it advertised was reduced to rubble in the late 1990s and rebuilt as a Courtyard by Marriott hotel.

Then, a First Union bank was built at the front of the property at the intersection of Eagle and Newtown roads. A bank sign, roughly half the size of the 20-foot Crown Cine sign, was erected announcing First Union was around.

Then, in July 2003, Wachovia Bank took over the First Union building â€" the company slapped its name on the bank’s sign.

Theories are all over the place. Perhaps its owner is an eccentric type who loves movies. Perhaps it has been there so long no one notices anymore.

The sign, now looking oddly out of place along heavily developed Newtown Road, even receives a few mentions on CinemaTreasures.org and CinemaTour.com, Web sites devoted to movie theaters, living and dead.

Roger Katz, of Thomaston, often posts on the site. Documenting movie theaters, especially the old movie palaces, is a passion for Katz. He photographed the Crown Cine sign in 2002 and posted it on the Web site. He was surprised to hear it is still standing.

When move theaters are torn down, often nothing is left. That makes the Crown Cine sign unique, at least for cinema enthusiasts.

“Usually the sign is the first thing to go. They usually tear that down before the building,” Katz said.

Katz was left scratching his head as to why the sign is still there.

According to the movie theater Web site, in addition to the three-screen Crown Cine on Eagle Road, there was a drive-in theater on Federal Road that fit nearly 500 cars. There was the Capitol Theatre on Elm Street, the majestic Palace Theater on Main Street, plus the Cinema Twin on Padanaram Road. Every theater has been closed or demolished.

The arrival of the Sony Loews multiplex off Federal Road was the last nail in the coffin for many of the city’s small theaters, according to people who post on the Web site.

The Crown Cine sign is a bit of an anomaly, according to City Hall workers. Because there are several properties on Eagle and Newtown roads that nearly overlap each other, it wasn’t easy to quickly determine who owns the sign.

Plus, the darn thing has been there for so long it has become invisible along the Newtown Road landscape. People just tend not to notice it anymore, officials said.

Sean Hearty, director of the city’s permit center, said no one has ever asked about the sign, save for a would-be restaurateur who related a story about trying to advertise on it.

“He said the guy wanted too much money,” Hearty said.

Based on that conversation, Hearty guessed the sign still stands because it is probably the best placed sign on Newtown Road, which has become a hot commercial corridor.

“It’s the biggest sign out there and you can’t beat the location,” Hearty said.

Turns out Hearty is on the money.

The man behind the sign is Mel Powers, a developer who owns dozens of commercial properties throughout the city.

In addition to the sign itself, Powers owns empty property next to the sign. That land eventually will be developed into commercial space as well. However, Powers didn’t want to go into too much detail about future plans for the sign and the site because nothing has been finalized.

“We’re going to use it for other things. It can be converted for other places that are going in,” Powers said. “It’s grandfathered because it has been there forever.”

Powers said the sign’s history dates back to 1968, when the movie theater opened.

The theater operated independently for about 15 years, Powers said, before it was sold to the Crown Cine movie chain, which eventually pulled out of the Danbury area.

“I think they were forced out by the Sony theater. They really ran a number on them,” Powers said.

Taking it down and putting up another sign could open a can of worms with city reviewing agencies. Technically, the sign is already out of whack with city sign regulations, said Wayne Skelly, the city’s zoning enforcement officer.

However, Skelly said he was merely speaking from memory and the sign may have an extensive paperwork trail in City Hall.

“There would have to be some research involved here, but I think the sign was involved in some variances years ago,” Skelly said. “We would have to dig them all out and check.”

Hey, they quoted me, cool!

Ever been driving down a street and see a sign for a business then spend like ten minutes searching for the business only to find it’s no longer there? I wonder if this happens to anyone with this theatre.

This excerpt was from the June 10 issue of the News-Times “Do You Remember?” feature.

Over the weekend 6.3 inches of rain fell in Danbury, which resulted in flooded roads and parking lots throughout the area. About 280 people were evacuated from the Trans-Lux Cine theater on Eagle Road in Danbury by Fire Department officials after a portion of the rain-soaked tile ceiling fell on a young boy during a showing of “Star Trek II.”

My dad is the owner of All Star Welding and Demolition. I remember when he tore down the theater. I was in third or fourth grade when it happened and i recall sitting in my dad’s lap and him letting me help to knock down part of it and then my brothers also got turns. I don’t remember going there very often when it was open.

I really hope they leave the sign up. It’s almost like a historical landmark. So what if the theater isn’t there anymore? The sign is in such bad shape that anyone who actually thought there was still a theater that went with it would probably figure that the theater was in bad condition also and not bother looking for it.

The News-Times did a story about the sign in 2005. It’s confusing because nobody (including the city) knows who the sign belongs to. There’s a crack/loophole that it fell into and now it’s just going to be up for a while.

Amazing — the theater has now been closed for just over ten years (in was flooded by Hurricane Floyd in September 1999 and never reopened), was demolished and replaced by a chain hotel, but the sign at the edge of the road is still there in 2009!

I just posted a pic on this page from the Danbury News-Times microfilm as it was being built.

The signs still stands as of December 2012.

I think the sign referred to in some of the above comments can be seen on this theater’s page at CinemaTour.