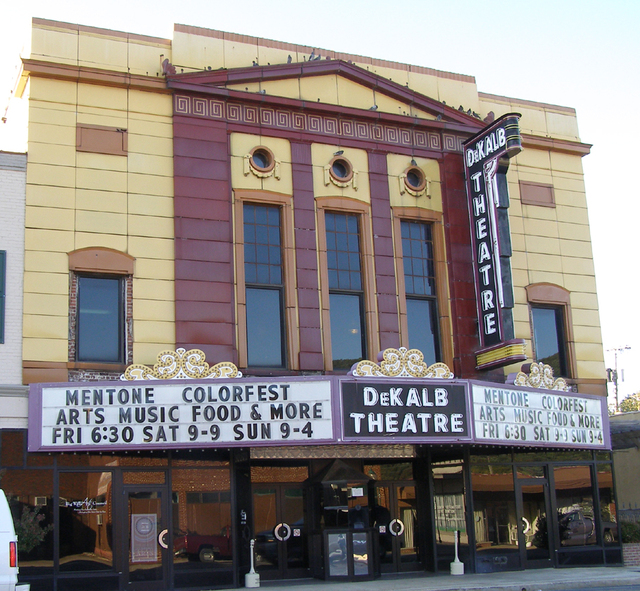 Here is a photo.
View link

Our band is performing at this Theatre Saturday Aug 4th, 2007. I plan on taking several pics of the inside and posting them soon…
Justin www.TheAlabamaBluesBrothers.com

The increased seating capacity in 1950 over 1941 was probably the result of a rebuilding that took place in 1950. The January 7 issue of Boxoffice said that the DeKalb was being “torn down” to make way for a new theater that was expected to open within four months. The project apparently took longer than expected, as Harry Hart’s column in the August 26 issue of Boxoffice reported that the DeKalb was expected to open about August 31.

From the various photos linked above I suspect that the building was not torn down, and that the new theater was probably built within the existing walls. That classic facade looks like it would date from the 1920s or earlier, though in parts of the south old styles lingered long after they were discarded in most other places, so maybe it really was rebuilt to look like that in 1950. Harry Hart’s column said the rebuilt DeKalb would have a porcelain front, but that must refer to the panels on the ground floor. The upper part of the building appears to be faced in terracotta.

“Colonel Thomas E. Orr, operator of several houses in northern Alabama, opened a new one at Fort Payne, Ala., known as the DeKalb.”