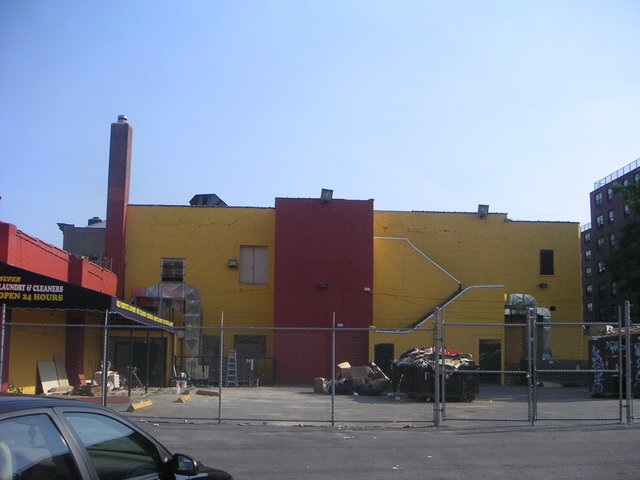 In later years it was taken over by Cinema Circuit Corp. and the Burland Theatre closed in 1971. It presently houses a supermarket and a dry cleaners.

Both my Dad and my Grandfather (on my Mom’s side) lived in The Bronx… my Dad on 167th between Tiffany and Fox from his birth in ‘37 until he joined the Navy in '56 and my Grandfather on Bronx River Ave for a few years in the early '40’s before the Army drafted him for service. They both mentioned this theater – my Grandfather especially – and would entertain me with their stories of “dish nights” and war-bond drives, etc. My Dad apparently went to the Loew’s Spooner and Boulevard Theaters with some frequency, while I recall my Grandfather talking about this theater as well as another called the Loew’s Elsmere. Of course, both waxed nostalgic about trips to the magnificent Loew’s Paradise to catch the bigger flicks earlier in their runs.

My entire family is predominantly from Washington Heights, Harlem and The Bronx so my Grandfather would reel off dozens of wonderful showplaces and neighborhood theaters he attended from the ‘30’s through the '40’s and early '50’s (before he settled with his family in the bucolic suburban setting of Elmhurst, Queens in '54). It’s hard these days for someone to imagine how prolific these neighborhood 2nd and 3rd run theaters were throughout the city. It seemed that everyone was some reasonable distance to a larger showcase theater like the Loew’s Paradise or the Loew’s 175th Street while also being in walking distance to at least one (sometimes 2 or 3) of the smaller 2nd run cinemas that proliferated during the 1st half of the 20th Century. Today, there are probably a similar number of screens (perhaps more) but they’re all concentrated in perhaps one or two huge multiplexes within driving distance. And all semblance of showmanship has completely dissipated.

Two photographs of Loew’s Burland Theatre I took in June 2005. I am not sure, but I believe the supermarket use has now closed and the foyer has been turned into a 24 hour laundry & cleaners, but this was also closed when I visited in the middle of the afternoon. Maybe it had yet to open?
http://www.flickr.com/photos/kencta/226244825/
http://www.flickr.com/photos/kencta/226245563/

The November 15, 1913, issue of The Moving Picture World said that the Burland Theatre had opened on November 1. In addition to the 2000-seat indoor theater, the project included an adjacent 3000-seat airdome for use during hot weather. The projection booth was situated so that the projectors could be turned around to face the screen of either theater. The house featured films made by Famous Players, All Star, and Kinemacolor.

The Burland had a seven-piece orchestra, but the MPW item made no mention of vaudeville. In fact, it noted that the screen in the indoor auditorium was against the back wall, with a throw of 155 feet. Prices were ten and fifteen cents for evening performances, five cents for weekday matinees, and ten cents for Sunday matinees.

The Burland Theatre apparently did not open as a Loew’s house. An article in The New York Times of November 16, 1914, said that David V. Picker had taken a lease on the Burland even before it was built, and had taken over direct operation of the house in June, 1914. The article said that he had lately sold a half interest in the Burland and his other house, the Eighth Avenue Theatre, to H. Whitman Bennett, and that the partners intended to open additional theaters on Broadway, in Brooklyn, and in nearby cities.