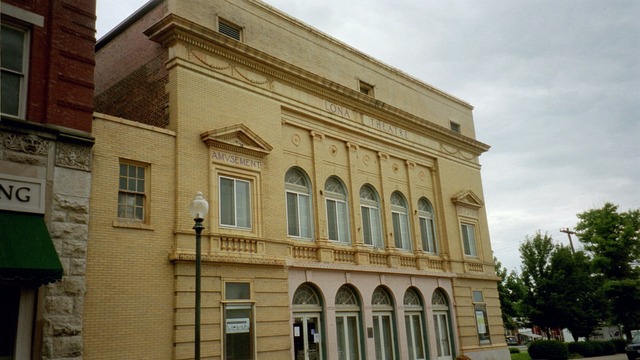 The Lona Theater opened August 12, 1920. A three story building with a yellow brick facade with yellow terra-cotta trim. Not very fancy, but dignified. For some inexplicable reason, the center of the street level portion has been painted pink.

From January 1926 it was renamed Liberty Theater. It closed as a movie theater in 1954 and became a live theater. The theater is now home to the Liberty Center Association for the Arts, a performing arts venue.

On the cinematour website there is a listing for a Diamond Drive-in Theatre in Sedalia, MO. There is a phone # and it is NOT listed as closed. I’d call the number but I’m assuming if it really still exists they would not be open this time of year anyway. Can any Sedalia residents shed some light on the subject? Is it still active? How come there’s not a link on cinema treasures? Thanks.

My wife’s grandmother danced in a theatre in Sedalia probably in the 1920s. Would anybody know of any old records pertaining to the Lona Theatre. It seems like it might be the one we are looking for. Thanks for any info that might be provided.

Information about the Lona Theatre is a bit sparse on the Internet, but it is clear that this was at least the second house of that name in Sedalia. A nostalgia piece in the January 1, 1942, issue of The Sedalia Democrat says that on December 30, 1917, the Lona Theatre, at 412 S. Ohio Avenue, was showing a William S. Hart movie. I’ve found references to the Lona Theatre in The Moving Picture World as far back as 1914.

An article from the December 18, 2013, Democrat says that the new Lona Theatre was formally opened on August 12, 1920, with 1,500 seats. I’ve been unable to discover what became of the first Lona Theatre when the new house opened. The building at its address has the name “Story’s Central” and the date 1882 on its parapet, so the earlier Lona Theatre was a storefront movie house.

The new Lona Theatre, though suited for vaudeville and legitimate productions, was also equipped for movies from the beginning, and the August 16, 1920, issue of The Moving Picture World said that the house had opened with the feature film One Hour Before Dawn as part of the program.

The house had been renamed Liberty Theatre by no later than January, 1926. Later that year the Liberty and the local Sedalia and Strand Theatres became part of a Kansas City-based chain called American Theatres. In 1928 and 1929, when sound was installed, the house was advertised as the New Liberty Theatre.

A review of local events of 1954 in the January 14, 1955, issue of The Sedalia Democrat notes that the Community Players theater group had moved into the Liberty Theatre in November. I’ve found no evidence that it ever operated as a movie house again.

The Lona Theatre was obviously designed by an architect with classical training, but nobody seems to know who it was. The renovation as a performing arts house in the 1980s was handled by local architect Neal Reyburn.

Thank you both for the information. We’ll see what we can do with it.
Carl Henderson

Carl: As far as I’ve been able to discover, there were only two big theaters with stages operating in Sedalia in the 1920s. If your wife’s grandmother was a professional dancer, she probably would have appeared at either the Lona/Liberty Theatre, or at the Sedalia Theatre, an older house opened in 1905 (not yet listed at Cinema Treasures.)

On the other hand, if she was an amateur performer she might have appeared at one of the small movie houses in town, of which there were several, most of them operating for no more than a few years, some for only a few months. Some of them are sure to have had had small stages, and all had at least a piano for music, and would have hosted such events as local talent shows, and probably presented local singers on a fairly regular basis. Live music was a big part of the shows at movie theaters before talking pictures came along.

The two big houses undoubtedly presented some local talent as well, but probably not on a regular basis. One example of the use of local talent (dancers, as it happens) is noted in an item from trade publication The Reel Journal of January 30, 1926. It was about the publicity campaign for the MGM production The Merry Widow, which was being handled by a Mr. Bishop. In Sedalia, he came up with a clever stunt:

“Bishop arranged a contest with the Sedalia Republican, the feature of which was to find out why blonde widows re-marry quicker than brunettes, and saw to it that when the picture came there would be a prologue presentation for it, given gratis by two professional dancing teachers, who were well repaid for their work by the advertising they received.”

This major movie (a “blockbuster” of its day) would undoubtedly have appeared at either the Sedalia or the Liberty. A prologue was usually a good-sized production, requiring several dancers, and the two dancing teachers putting it on might have had their better students performing in it. If it went over well, the same arrangement might have been made with theater operators for similar presentations to accompany other movies.

Hi Joe, My wife’s grandmother’s name was Marie McClain. She was with a professional group called Arnold’s Beauties(or something like that). She started dancing when she was 14 years old, which would have been around 1920. She danced for about 4 years until she married at 18 years of age. She may have started in another state, maybe one of the Carolinas. I think they traveled over several states, including Missouri, during her career. It sounds like it could have been either one of the theaters you mentioned. My wife is going to research some old Sedalia newspapers online to see what she can find. Thanks for the input. Carl Henderson

Hi Joe, I was raised in Sedalia & graduated from SC in 1948. As a teen I recall these 3 theaters showing movies. The Uptown on Ohio St., Fox on East 5th St., Liberty on West 5th ST. I believe the Sedalia was on the corner of East 3rd & Massachusetts. my memory is not real clear on this but I believe I saw a movie here when I was younger. The entrance was on 3rd St and there was steel stairs on east side of bldg. outside.

On the web site Show me Warrenburg Johnson County under Sedalia pics there is a picture of the Sedalia Theater that I mention before.