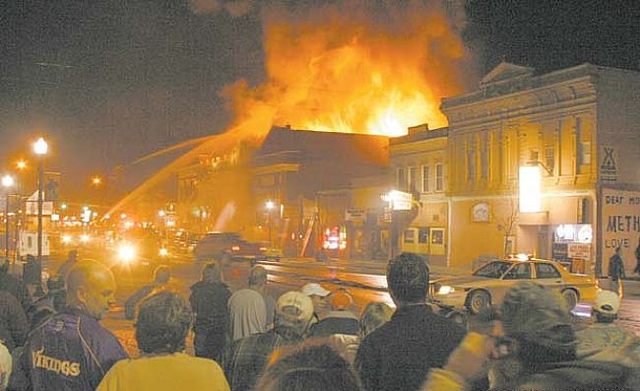 The Rialto Theatre, which was built in 1921, later functioned as Deer Lodge’s community center, hosting movie screenings, concerts, live theatre and civic events. The Rialto Theatre was beautifully restored to its original appearance and was added to the National Register of Historic Places in 1998.

Tragically, the Rialto Theatre was extensively damaged by a fire on November 4, 2006. It was restored and reopened movie theatre on May 19, 2012.

So, so sad to see such a memorable building gone to fire. Hopefully with some of the fixtures and decor not effected, this site can be rebuilt so the next generations can enjoy the memories that we all have embedded in our hearts and minds. Please, lets pull together and ensure this gets rebuilt. Growing up in the Deer Lodge/Garrison area in the 50’s has lots of great memories for me. When I return to visit, it brings a smile to my face to appreciate the ‘foundation’ my parents built for me growing up in a small town.
Linda Williams (Gerdts)
Parents owned and operated Gerdts Grocery in Garrison for many years.

Certainly (and tragically) this makes the status here “Closed” (at least!) or more aptly, “Closed/Demolished.” Yet one more post mortem…

Here are photos of the fire last November:
http://tinyurl.com/yv7heu

This following article appeared in the August 28, 2011 isue of the Los Angeles Times:

If you live in a big city, movie theaters are places you complain about, despair of, maybe even avoid. In this small town 80 miles southeast of Missoula, however, the single-screen Rialto Theatre is so essential to residents' sense of place — often in unexpected ways — that it’s almost impossible to imagine life without it.

So when the Rialto caught fire on Nov. 4, 2006, the entire town of 3,400 had its heart in its throat. Despite 3 million gallons of water poured on the blaze by firefighters, the theater burned for three days, with 50-foot flames visible for miles.

Two weeks later, a community meeting was held, and the sentiment to rebuild, remembers Steve Owens, president of the Rialto Community Theatre Board of Directors, was “just overwhelming. One or two people said ‘don’t bother,’ but the other 200 said, ‘You just need to do it.’” A highlight of the meeting was an appearance by a group of seventh-grade girls who held an impromptu bake sale in front of the Safeway the week after the blaze, and “donated $300 before anyone got their act together. That had an impact.”

From those modest beginnings came a juggernaut of passion and commitment to rebuild. “I can’t explain it,” says board member Ron Mjelde, “but when this gets into your blood, you live it.”

Deer Lodge is a not a booming place (its per capita income is $14,883, according to the 2000 census), but when the cost estimate came in at $3.5 million due to strict building codes for theaters, the town did not flinch. “It was never that we wouldn’t get it done,” says Owens, a pharmacy technician, “it was that it would take the rest of our lives.”

But now, five years later, the impossible is close to happening. The town is only $300,000 short of its fundraising goal, and the theater is nearly rebuilt. So how did a city without great wealth or a corporate presence make something like the Rialto revitalization happen, and, equally important, why did they put in the effort?

Deer Lodge is a classic Western small town. Birthplace of former Lakers coach Phil Jackson, it’s best known in Montana as the home of the state prison (the high school’s sports teams are nicknamed the Wardens). Its friendly downtown invites you to eat at the Broken Arrow Steak House and Casino, shop at New to You (“Fine Used Clothing for All Ages”), appreciate the “Navy Seals 1, Bin Laden 0” sign outside an insurance office and admire the Rialto.

The theater opened on May 2, 1921 and is a Beaux-Arts reminder of the days when Deer Lodge was a booming trading center. Its pink and white neon marquee now says “Send Donations to P.O. Box 874, Deer Lodge, 59722” instead of listing films, but its cream-glazed brick and terra cotta facade still gleams in the sun the way it did when original owner Jens Hansen promised the Silver State Post he would show “the very best pictures regardless of the high royalties he has to pay.”

In recent years, movies were shown Fridays, Saturdays and Sundays. “It was a place people could drop their kids off and know they’d be safe,” Owens says. “If the parents were late after the show was over, someone would wait with the kids until they showed up.” Admission was $4 for adults and $3 for children, plus “people love our popcorn,” he says. “Cars would double-park three deep to get some.”

Theater board member Gayle Mizner, whose newborn great-grandson is the seventh generation of her family to live in town, points to the theater’s balcony and says, “right up in the corner is where I had my first kiss. My heart is in Deer Lodge.”

As the largest auditorium in Powell Country, the Rialto has served as a theatrical space as well. One week in May 1929, it showed Buster Keaton’s “Spite Marriage” and welcomed the Los Angeles Philharmonic on its Northwest tour. In recent years, it has hosted plays, concerts, lectures, dance recitals, graduations, even funerals.

Deer Lodge came close to losing the Rialto in 1995, when the original owner’s family wanted to sell it and a casino operation was rumored to be interested. The asking price was $90,000, but it was offered to the community for $65,000; a nonprofit organization was formed and the funds raised in a few weeks. Headlined the Post, “Congratulations Deer Lodge. The Rialto Is Yours.”

For 10 years, some 300 volunteers ran the Rialto, and the town put $350,000 into upgrading it. (Surround sound speakers were in boxes ready to install when the fire broke out.) The sense of community ownership that had built up over that decade, plus the knowledge of how hard people had worked to maintain and improve the facility, added to the impetus to rebuild. That, and something more — a sense that having a theater is important for the community’s youth.

“People here should have the same opportunities for their children as people in other communities,” Owens says. “If we can make it happen, make a place for them to sing on a stage, do their plays, we should.”

As it turns out, the Rialto’s stage, complete with six original 1921 painted backdrops, was not touched by the blaze, shielded by an asbestos curtain originally installed to protect audiences from onstage fires. Also saved were the projection booth and its 35mm projectors, as well as the facade.

The fire off blew the roof, and the Rialto’s shell was left open to the sky for months while the board consulted with architects.

Re-creating the theater exactly would have been too expensive, but the new space had to be as close as possible to the way people remembered it to gain fundraising traction in town. The original estimate was $4.5 million, but volunteer work and zealous penny-pinching brought the cost down. For instance, an old satellite dish headed for the dump was repurposed as a decorative ceiling dome, saving $5,000.

Key was a contractor (Martel Construction of Bozeman got the job) who would do things the town’s way. “We wanted to use volunteers as much as possible,” Owens says. “And we never wanted to have any debt, which meant nothing started until the money was in hand. If we needed to take a break to raise more funds, if it took a little longer, that was OK with them.”

Volunteers hung drywall, , and the high school art class worked on the decorative ceiling. A Job Corps team is scheduled to take down the old fire escape and put up a new one. And, Owens says, “there is a nice lady who likes to sweep. She cleans up the whole theater after the carpenters are finished for the day.”

This spirit of cooperation was vividly visible when it came to acquiring 400 replacement seats. Owens heard from a theater owner in Miles City, at the other side of the state, that he had some seats from a Florida theater that he didn’t need. They were donated to the Rialto.

The Miles City high school choir loaded the seats onto a truck, and a contractor in Anaconda paid the shipping costs. Deer Lodge’s high school football team unloaded the seats, putting them in donated storage space. A company in Butte cleaned the fabric gratis, and an inmate fire crew from the state prison scrubbed the metal clean of gum.

Owens estimates that there have been close to 2,000 individual donors, from Deer Lodge, 60 other Montana communities and 40 other states. No donation is too small: gum ball machines in Peoples Bank and the MRC gas station say “Candy for Rialto — 25¢” Elementary students collected spare change and took it to be counted at Pioneer Federal Savings & Loan, which matched the $1,928.

The most elaborate fundraiser was a five-course dinner catered by Becky Blakely, a retired pastry chef who’d worked at Washington, D.C.’s Kennedy Center. Though local benefits were usually in the $30 range, the board decided to charge $100. “People said we were crazy, but it sold out in two days,” Owens reports. “We netted $50,000 in one night, unreal money for Deer Lodge,” an amount the Pioneer S&L agreed to match.

But Owens' gifts as a grant writer have been the major source of funding for the Rialto. Owens knew that raising money would be a challenge because of the economic climate and the fact that many foundations “only give locally and don’t even know Montana exists.”

Owens wrote to more than 500 foundations. “In a good economy, if you get a 5% response, you’re doing well,” he says. His response rate is 10%, including a pair of $300,000 grants. “You have to have a compelling story,” he says, modestly. “I’m persistent and patient, and I keep emotion out of my letters. I don’t fluff it up.”

Now that the Rialto has won Montana’s biennial Governor’s Award for Preservation and the reopening is starting to seem possible, talk in town is focusing on what the opening-night movie should be. Some are suggesting the film that was scheduled for the night the fire broke out, the Kevin Costner-starring “The Guardian.” And others, Owens says, not quite believing it himself, are pushing for either “Backdraft” or “The Towering Inferno.” He shakes his head, thinking about it all.

The Rialto Community Theater, “The Rialto” had their Grand Reopening on May 19, 2012. It is currently used only as a movie theater. http://www.deerlodgerialto.com

The status of this theater should be changed to “open” and not “closed”.

According to their website the theatre is also used for live performances in addition to movies.