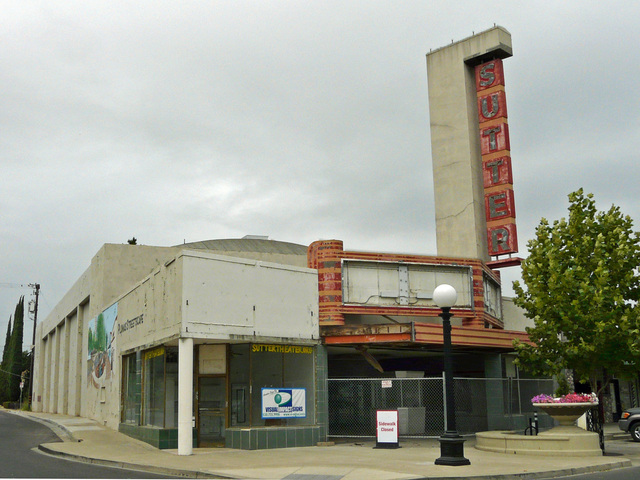 The Sutter Theatre originally opened in March 1950 with 916 seats. The outside is a bit shabby, and the building is painted gray. The vertical sign has large squares for each letter of the name. It has a very deep recess under the marquee, with an external ticket booth and orange terrazzo.

Sadly, the Sutter Cinema 3 was closed in December 2006. By 2011, restoration work had begun to convert into a performing arts center.

Between Cinemark and North American, whose theatre is actually going to get built to replace this one?

Boxoffice Magazine’s issue of March 11, 1950, contained an item saying that the Sutter Theatre was nearly ready to open, and that the date would be either March 15 or March 21, depending on the timely completion of some remaining interior work.

A little story from my friend (and theatre photo/memorabilia archivist) Jack Tillmany, onetime manager of the Sutter: When he was there, a family of owls had a habit of nesting each year in one side of the letter “S” on the vertical sign tower. As the baby owls were learning to fly, they would break the neon tubes when coming back in for a rather clumsy landing to the nest. Both sides of the letter were on the same circuit, so for a time each year, Jack was proud manager (at night, when the sign was lit) of the “UTTER” Theatre. There was no point in trying to repair the tubing until each year’s new family of owls was gone and the letter could be cleaned up. How long this yearly ritual of owl-rearing and repeated sign repairs lasted after Jack’s managerial departure for bigger and better theatres in the Bay Area is unknown.
Another thing: My friend, neon contractor Greg King, still has some new neon tubes which he had made for the Sutter some time ago to replace old missing tubes. The theatre either closed or changed hands before they could be installed. Anyway, perhaps they could finally be installed if the theatre is going to be revived. Please contact me if that’s the case, and I can put the parties concerned in touch with Greg!

Thanks Gary Cute story,now for the one with the Rats at the Imperial….LOL.

Slight detail correction to the owl story: I recently got clarification from Jack—The owls would come into the sign from the top, and nest in the space above the “S”, not actually in it. Careful examination of images of the sign would appear to confirm this.

For the last two years or so(probably longer) the Sutter Performing Arts Association has been raising money to restore this property and turn it into a Performing Arts Center for the community. The fundraising has done really well, and they have restored the marquee and opened the side shop as an art gallery to feature local artists. The theater is looking great from the outsides, but is still undergoing a lot of the inside renovations. The main screen room is going to hold a large stage for productions, while the two smaller screen rooms will become a black-box theater and a conference room. For more information, the Sutter Performing Arts Association has a website (www.suttertheater.org).

I was a roving Projectionist at between the Sutter and State theatres from 1966 to 1986. I seen the old one screen go to three screens. I also was the first to operate the more modern and up to date projectors. SSo sad to see these theatres to die. Didgetal pictures do not hold up as well as film presentations.

Website for the Sutter Theater, currently in Phase 3 of their restoration.
Video in link.