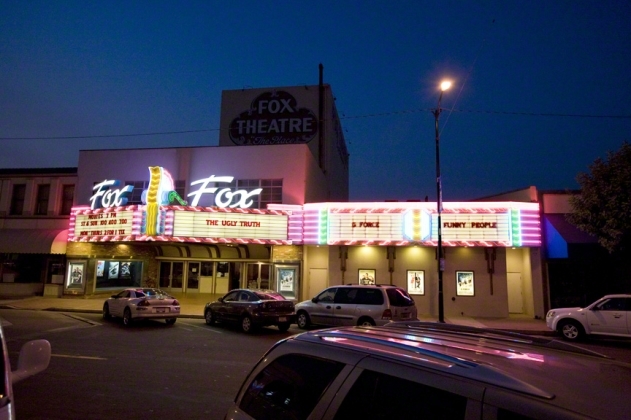 T & D’s Hippodrome Theatre was opened around 1918. It became part of the Fox West Coast Theatres chain by 1930 and was still named Hippodrome Theatre in 1950, when it was listed as having 1,078 seats. By 1952, it had been renamed Fox Theatre. This is one of the theatres where you enter on the side (the back corner, actually) due to the fact that the theatre auditorium runs along the block behind stores. A restored advertisement on the back of the theatre has the slogan ‘the place to go’.

The marquee is excellent, and an extension covers a neighboring storefront. The theatre has a single screen, but there are five poster boxes. The external ticket booth is long gone, but the lobby was not glassed in completely.

The theater has been closed and the most recent operator has begun to remove equipment: View link

Such an awesome marquee, it should be saved and the neon restored, they are not made like this anymore,,,, move it to a new theatre and restore it.. It appears to be similar to the PIX that was on Hollywood Blvd,(Now Henry Fonda Theatre, they should of kept the neon marquee) huge flashing neon colors, just beautiful !!

Great news, the Fox Theater is opening back up. Marty Stuart is performing for the theater Friday, June 10, 2011.

Opening weekend went well. There are some photos in this issue of the Taft Independent

The only item I’ve found about this theater in the trade publications so far is this one from the December 6, 1930, issue of Exhibitors Herald-World:

“Carnival, Night Football Fails to Stop This Manager; He Has a Midnight Show

“When Taft, Cal., an oil town, celebrated its twentieth anniversary recently, so many evening attractions popped up that it appeared the town’s theatre was doomed to "slim pickings.” A tent show came in for the occasion, and a night football game was on the program.

“Did Manager James Gleason of the Fox Hippodrome call it Black Friday and quit? Nothing like that. He merely figured that the night would be young after the football game and the tent show.

“So he went ahead with plans for a midnight show. The city’s anniversary committee worked with him, sold tickets for the show, did extra advertising to plug the picture and supplied stage talent for a share of the receipts. The committee received a neat sum for its efforts. The theatre earned $70 more than its average evening receipts.”As the article refers to the Fox as “the town’s theatre,” the other houses in Taft must all have closed by that time. I’ve found references to a Olympia Theatre, renamed Photoplay Theatre in 1914; a Star Theatre, renamed Optic Theatre in 1916; and a Rex Theatre, operating in 1917. Given the time spread, these might have all been the same theater operating under five different names.

“Taft—A permit has been issued for the erection of a moving picture theater on three lots on Center street, which have been leased for ten years by Turner & Dahnken of San Francisco. The building will be 78x118 ft., two stories in front, brick construction. An air cooling plant will be installed. The estimated cost of the building is $10,000.”

The Fox Theater is closed, temporarily at least, and the West Side Recreation and Park District is in contact with the building’s owner to see if it can be reopened.

There are numerous problems with the landmark downtown theater that resulted in it being closed earlier this month.