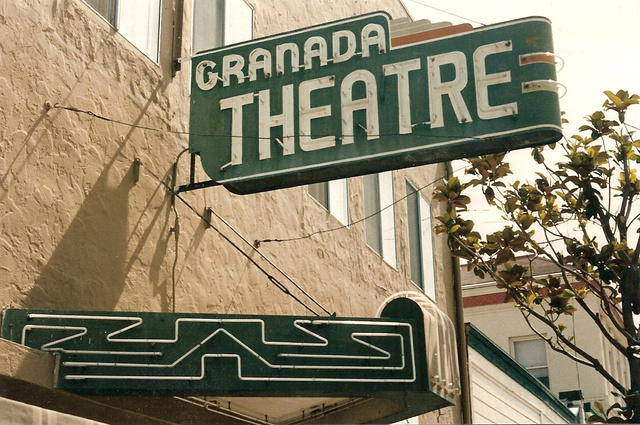 This theater is one tenant in a two story tan stucco building with stores either side of the entrance and apartments upstairs. The marquee is stuccoed as well, so the whole effect is rather blah. The interior looked like it might still be ‘50s funky. Street level has some red tile. Thankfully, the entire name is not displayed, only 'Granada’.

After closing as a movie theater in late 2007, the Granada became home to the San Benito Stage Company, which stages live theatrical performances.

Yes, I figured it was contemporaneous with the other Granadas in the area. The name is pretty silly. How does one save value?

Before the 1989 earthquake, this theatre had a moderne horozontal swing-out sign over the marquee. It read, GRANADA THEATRE, and flashed on and off. I took a photo of it circa 1986. The present marquee wedge-shaped canopy is a retrofit of what was there before. Originally, this wedge was edged in neon in a zig-zag geometric pattern. The marquee and sign were green, with white lettering. The last time I was by there a couple of years ago, the vintage tiled box office was still there between the entrance doors.
The facade itself was even plainer before the quake—just flat, with aluminum sash windows. The present facade look is actually an improvement, though the former sign and marquee design are missed.

It should be noted also that Hollister had one other old theatre, about two blocks away on the main street, the State (last known as the Showcase) which operated as a single screen firstrun theatre until the ‘89 quake, which closed the house. While closed, some bums made their home inside and accidentally burned the place down.

THE QUAINT GRANADA THEATER IS A HOLLISTER AND SOUTH BAY TREASURE THAT IS THE PERFECT VENUE FOR FOREIGN AND ARTFUL FILMS. IT TREATS THE VIEWER TO A RETRO FILM EXPERIENCE, AND YET, IT IS EQUIPPED WELL ENOUGH TO DO JUSTICE TO FILMS LIKE THE RECENTLY SCREENED “HERO”, WHOSE AMAZING DIRECTION AND GLORIOUS CINEMATOGRAPHY IS DISTINED FOR OSCAR RECOGNITION. (IT IS ALSO PERFECT FOR SHOWING “SUNDANCE FILMS”). WE APPRECIATE THIS LITTLE THEATER AND GIVE KUDOS TO THOSE WHO MAKE SURE IT IS MAINTAINED AND UPGRADED FOR THE PUBLIC’S PLEASURE AND EXTRAORDINARY FILM VIEWING EXPERIENCES.
KATHY RUBINO AND BOB ROWLANDS: HE SAID, SHE SAID MOVIE REVIEW COLUMN FOR THE PINNACLE NEWSPAPERS.

I have been to this theatre a few times and I have never had a bad experience. The employees are always nice and courteous. The only complaint I have is the popcorn. It is not the best but everything else is just fine. I had never gone into the restrooms (which are right next to the screen ) but having to take my daughter I found out how really cute they were! You feel like you have stepped into a time warp. They really were very clean as well. All in all, I really like this theatre and will continue to be a patron.

I worked at The Granada in the 80’s when I was in high school. Tickets were FIFTY CENTS when I started there, and they went up to a dollar, and then up to two dollars when we got Roger Rabbit (it was still fairly new when we got it, so we had to agree to keep showing it for months and months!). We had a lot of fun running that theater. Legendary fun.

Rachael75 commented on the quality of the popcorn. Well, I haven’t been to Hollister in years, so I don’t know what the popcorn is like today, but back in the day we used to receive the popcorn in huge bags already popped. The light bulb in the big glass popcorn box served to heat it. What do you want for FIFTY CENT admission!?!

The Moonlite Drive-In was open in Hollister in 1963. Capacity was 460 cars. Operator was Hans Serenson.

The San Benito Stage Company is now renting the Granada. We are having at least four theatrical performances a year and will be renting it out to other performing arts groups. We are currently painting and giving the theater some long needed TLC which included restoring the basement for dressing rooms. We are also raising funds so we can install theatrical lighting and sound. You can visit sanbenitostage.org for more info. :–)

I can’t remember if it was the State or Granada, but in the early ‘60’s, my father and I put on a magic show for the migrant workers, we packed the place. Back stage was a dressing room covered with beautifully done colorful posters of past Mexican entertainer’s who performed there. Pop would explain the next trick in English then pause while it was translated to the audience. There would be a big 'collective’ “Si”!..cute! They appreciated a good show!