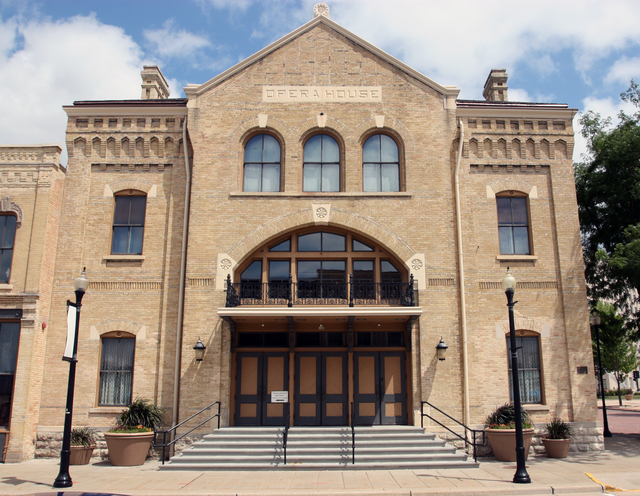 The Grand Opera House opened in 1883, designed by popular local architect William Waters, who designed many of Oshkosh’s historic buildings. The 921-seat theatre opened with the opera “The Bohemian Girl”. The theatre was designed in the style of a late-19th century European opera house, complete with lavish decor including a blend of Queen Anne and Neo-Classical styles in the gracefully appointed auditorium, which contained a balcony and large stage.

The Grand Opera House was noted for its superb acoustics and among those who appeared on its stage during its early years included Mark Twain, Sarah Bernhardt, Maude Adams, John Philip Sousa and President William Howard Taft.

By the 1920’s, the Grand Opera House was presenting vaudeville acts on its stage, and among those to perform there during this time included Harry Houdini and Harry Blackstone. During the late-1920’s, the Grand Opera House closed for a number of months while it was remodeled and modernized to the plans of architectural firm Dick & Bauer, including heat, air, new plumbing, electricity and decoration. When it was reopened, as the Granada Theatre, it was used as a second-run movie house, with the ocassional live performance. By 1941 it was operated by Alliance Theater Corp. and had been renamed Grand Theatre.

In 1950, the theatre’s new owners moved the entrance from original grand entrance on the front of the building on High Avenue, to a newly-constructed entrance on the corner, with a new, plain triangular marquee. Furthermore, at this time, part of the stage was removed for the addition of more seats.

By the 1970’s, was operating as a venue for adult films. Ironically, it was during its years showing adult films, remodeled almost beyond recognition, that it was named to the National Register of Historic Places (1974). In 1980, the city of Oshkosh acquired the Grand Theatre, and two years later, a massive restoration project was begun to restore the Opera House to its original splendor.

It was finally rededicated in 1986, after a $3.5 million restoration and renovation project was completed. Appropriately, the Grand Opera House reopened with the same opera it originally opened with more than a century before, “The Bohemian Girl”. The breathtakingly beautiful Grand Theatre, a fine example of a Midwestern Victorian-era theatre, today hosts live stage shows, concerts, film screenings, community events, and much more. It also hosts the Student Discovery Series, a well-known children’s theatre, which includes a wide array of performances.

Some of my photos of the Grand can be seen at.

The Grand Opera House in Oshkosh is listed in the 1897-98 edition of the Julius Cahn Official Theatrical Guide. J.E. Williams was Mgr; the seating capacity is not given. Ticket prices ranged from 25 cents to $1.50. The theatre was on the ground floor and had both gas and electric illumination. The proscenium opening was 32 feet wide X 42 feet high, and the stage was 36 feet deep. There were 10 in the house orchestra. There were 2 daily newspapers and 4 weeklies. Hotels were the Athearn, Tremont, Revere House and Fowler. Oshkosh population was 32,800.

Oshkosh, by gosh…what a lovely renovation on your opera house!

From the Daily Reporter:

Recent performers at the state’s oldest operating theater came a little too close to bringing down the house.

The city of Oshkosh shut down the Grand Opera House on March 6, after an engineer discovered two trusses in the 125-year-old building’s roof needed immediate repairs. The decision left the organization that leases the theater from the city scrambling to clear out the performance space to make room for construction work.

The decision might have saved the Victorian theater from a major accident, said Joseph Ferlo, executive director of The Oshkosh Opera House Foundation Inc.

“It was a question of safety,” he said. “Obviously, we didn’t want to take any chances.”

The deteriorating trusses are part of the theater’s original woodwork, said Jon Urben, Oshkosh director of general services. A crew from C.R. Meyer and Sons Co., Oshkosh, is reinforcing the trusses with steel rods, he said, and the work is expected to be complete by the end of March.

There’s no total yet on how much the work will cost, Urben said. All repair costs will come out of the theater’s budget, he said.

The Grand Opera House will pay for renting space in other theaters and for other performance-related costs, Ferlo said. Structurally, the challenge is fixing the roof without disturbing the refurbished interior, he said. The theater was renovated in 1986.

The Grand Opera House had to move 22 scheduled performances to make room for the work crew, Ferlo said. A performance of “Men on Ice” on March 6 was relocated to a theater across town less than six hours before the curtain was raised.

“It was like a battleground,” Ferlo said. “I just sent people out and trusted they’d do their job.”

Tom Karrels, an engineer and owner of T.R. Karrels and Associates SC, Oshkosh, discovered the roof’s troubles during a structural analysis needed to install a sprinkler system, Urben said. The sprinklers were needed to secure a state variance to let the theater expand into a building next door, he said.

“It’s the silver lining to this thing,” Urben said.

The theater’s scramble in recent weeks tested the old theater adage: “The show must go on,” Ferlo said.

“It was never more true than last Friday night,” he said. “But we never considered canceling. People wait a long time for these shows to come to Oshkosh.”

The Grand Opera House in Oshkosh is among the beneficiaries of spending items quietly inserted into the Wisconsin state budget.

Democrats who control the Legislature’s budget committee approved millions of dollars of spending despite the state’s $6.6 billion budget shortfall. The earmarks need approval from the full Legislature and Gov. Jim Doyle to become law.

Critics attacked the items, many of which were introduced hours before they were approved early Friday, as wasteful pork-barrel spending. The Republican Party of Wisconsin mocked funding for the opera house, among others.

But Democrats and those receiving the money defended the projects as necessary and helpful to local communities.

They include $500,000 to help renovate the Grand Opera House in Oshkosh, which has been closed since February because of structural problems that make it unsafe.

Joseph Ferlo, executive director of a foundation that runs the opera, said the building is the state’s oldest operating theater and must be preserved to help Oshkosh’s economy, the arts and tourism. The funding will help with an estimated $1.5 million renovation to reopen the theater next year.

“I understand why earmarks like this would come under scrutiny,” he said. “But under that scrutiny, saving a structure of this significance is a reasonable use of discretionary funds.”

I had two great aunts who were in vaudeville and played the Grand Opera House in January of 1918. I am glad to see that it is still standing and not demolished,as so many other theaters have been. One day I hope to visit this gem.

The state Assembly budgetâ€™s $500,000 boost for Oshkoshâ€™s Grand Opera House renovation will not mean a thing if the city cannot free up the money to cover its portion of the project.

â€œWhen youâ€™re balancing out whether to pay for a historic building or neighborhood needs, the choice becomes clear,â€ said Oshkosh Alderman Bob Poeschl.

The Assemblyâ€™s version of the budget commits state bonding for the project if the city, which owns the opera house, can come up with a plan to cover the difference. But there is no cost estimate for the project.

The city shut down the opera house in March after an engineer discovered two trusses in the 126-year-old buildingâ€™s roof needed immediate repairs.

The repair work is out for bid, and city leaders will get a better idea of the cost when bids are submitted next month.

But if the cityâ€™s share of the money is too much for taxpayers, the project likely will be delayed.

If that happens, Hintz said, the state money could disappear. Because the state is offering bonding, any failure on the cityâ€™s part to cover the remaining costs means the state will not pay.

Several GOP lawmakers during budget deliberations used the project as a prime example of unnecessary spending when the state is trying to climb out of a multibillion-dollar budget hole.

â€œIf the community wants to have it, then the community can figure out a way to pay for it,â€ said state Rep. John Townsend, R-Fond du Lac.

But Poeschl said the project is almost certainly out of the question without state support.

â€œPeople hear â€˜opera houseâ€™ and think one thing, but this is a regional arts and education center,â€ he said. â€œWe attract national touring acts. I think the project stands up to the scrutiny.â€

If the money remains in the budget, the state Building Commission still would have to sign off on the project before authorizing the bonding. But Hintz said he realizes the greater challenge might be at the local level.
City Manager Mark Rohloff, who is figuring out city finances and possible capital campaigns for the project, was unavailable for comment before deadline Wednesday.

The opera house is a national historic building worth maintaining, Poeschl said. But all Wisconsin cities are struggling to prioritize services.

â€œIf the work doesnâ€™t get done, it only gets easier to keep postponing it and saying, â€˜Weâ€™ll do it when we have the money,â€™â€ he said. â€œBut we have very little information right now, and this is already a very, very challenging time for taxpayers.â€

The Wisconsin State Building Commission today freed up money for the Grand Opera House. The Commission also directed money toward such other nonstate projects as a library remodel in Eau Claire, the Madison Childrenâ€™s Museum, and the Myrick Hixon EcoPark in La Crosse.

Here’s a recent article about the work going on at the theater: it is scheduled to reopen in the fall after repairs to its roof have been made and other renovations completed: View link

The late-1920s remodeling of the Grand Opera House in Oshkosh into the Granada Theatre was designed by the Milwaukee architectural firm of Dick & Bauer. It was listed among their works in an ad the firm published in the December 24, 1929, issue of the Appleton Post-Crescent.