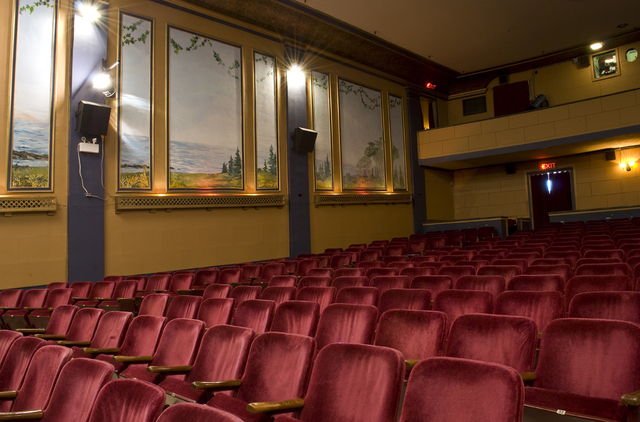 Designed by Henry Holdsby Simmonds, who designed most of Vancouver’s early theatres, including the restored Stanley Theatre on Granville Street (built two years after the Patricia Theatre). The Patricia Theatre was built by Smellie & Gallagher; commissioned by Bobby Scanlon (son of one of the founders of the Powell River Company and therefore of the company town of Powell River) and Myron McLeod in 1928. It replaced the first Patricia Theatre built in 1913, just down the street. We have the blueprints submitted for approval in March, 1928, know that two of the Company houses were removed from site to make room for this gorgeous little Spanish Revival/Atmospheric style building on its corner lot, and that construction started in July, 1928 with the first film being shown “What Women Want”, was on November 5, 1928. Following a naming contest, the theatre was named after Princess Patricia, granddaughter of Queen Victoria, and daughter of Canada’s then Governor General, the Duke of Connaught and Strathearn.

There were originally 450 Heywood Wakefield seats installed: 28 balcony, 28 loge, and 394 general; and a Robert Morton organ which was sold off in the 1970’s. The last organist, Henry Pavid, installed a series of his own organs starting with a Wurlitzer and ending with a Baldwin Cinema II which the family restored to the theatre upon his death at the age of 94.

In 1982, 260 functioning Heywood Wakefield seats were salvaged from the old Penmar Theatre in Penticton, and after a seat sponsorship plan, 260 seats from the Orpheum Theatre were installed in 2009, replacing the old worn out ones.

Our family is the fourth owner of the Patricia Entertainment Company since 1913, and have relocated our picture framing business into one of the two original storefronts, utilizing the second storefront as our concession area. The professional offices upstairs have been converted into a suite and offices for our businesses. We are still a single screen independent, showing first run movies, art films, with traditional theatre organ music before each show on the Baldwin Cinema II organ, staging live theatre performances, concerts, dance recitals, weddings and speaking engagements. We’re open 362 days a year, with many matinee weekends for kids movies, and still employee 95% high school students, who learn how to be employees and how to interact positively with the public.

Our projection equipment has been updated to include some 1940’s cameras and 1960’s Xenon lamphouses on the original 1920’s supports. The carbon arc still projector for the glass preview slides and the carbon arc follow spot for the vaudeville acts are gone, but we still use the original re-wind bench and equipment. In May 2012 it was equipped with digital projectors.

Wow! Sounds like a good reason to visit Powell River. Thanks for keeping the Patricia going.

Hi all, I am new to the site and looking for help. I am a researcher on a book dealing with cinema in British Columbia. I would love to include reminiscences about specific theatres, photos, or any information about how film and theatres in general affected your life and/or community. This would include rented films, documentaries from libraries, as well as local theatres or film study groups. Any information you would like to share would be most welcome.

Thanks for sharing your love of movies!

New acoustical panels were recently installed in the Patricia to enhance the sound quality: View link

Just realized that we’d never updated our description after the great community-wide fundraising for conversion to digital equipment in May 2012! It’s a beautiful thing to be able to offer the newest technology right alongside the traditional, and still to have retained the best live performance acoustics! :) Best of all is to still be operating, when so many traditional, independent theatres were not able to make the conversion and have been lost to their communities.