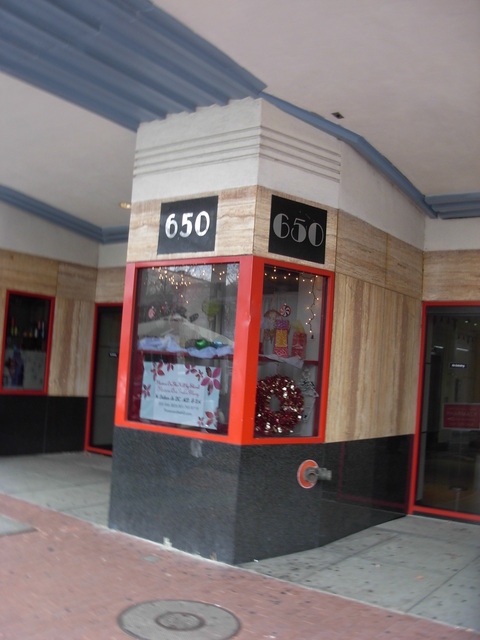 Once a truly fabulous Art Deco palace on Capitol Hill, the John Eberson-designed Penn Theater, which opened on December 27, 1935 with Errol Flynn in “Captain Blood”. It became an exploitation theater in the late-1960’s. The Penn Theater originally was one of two sister theaters, but the other theater, the Avenue Grand Theatre, which was right across the street, burned down in 1970.

The Penn Theater’s claim to fame is that it was the theater showing “Mohammad: Messenger of God”, the film which angered the Hunnafi Muslims so much they took the DC City Council hostage and shot then city councilman Marion Barry. The Penn Theater was closed in 1982.

During the mid-1980’s, the surrounding area began to be revitalized and the Penn Theater was converted into condos. Fortunately, but strangely, the theater’s facade was saved and became the entrance to the condo building—retaining its Art Deco style past.

The Penn Theatre is located at 650 Pennsylvania Ave. and it seated 1438 people.

“….the theater’s facade was saved and became the entrance to the condo buildingâ€"retaining its Deco past.” This saving of a theatre facade was interesting to read.

The sister theatre was the AVENUE GRAND for decades, but was renamed CAPITOL HILL when it was briefly a first run arthouse theatre. They played KING OF HEARTS, for example. Both the PENN and AVE GRAND were on Capitol Hill —– an excellent place to get robbed and/or murdered particularly when the Cokehead Mayor Marion Barry ran the city. One might think Congress would straighted out their own turf; after all several were attacked as were their employees. But no; it wasn’t until Barry was jailed, then the Republican Congress took over and began the cleanup. High potential of armed robbery & murder just is not good for theatre business. Too bad; the PENN was one of our best.

Here is the link for the above photo:
View link

Here and here are January 2008 photos of the former Penn Theatre.

Does anyone know when the Penn Theater was built? Was it ever called the Penn Gardens?
I use to go to the Penn Theater in the 50’s and early 60’s, on Saturday and when we had extra moeny on Sunday as well (the movies changed).