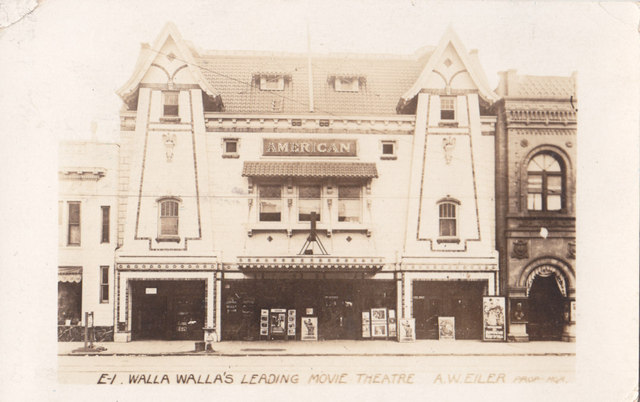 The three story facade is all white glazed terra cotta with blue accents and a red tile roof. Two dormers with very steeply pitched roofs protrude all the way to ground level. A unique building. It opened as the American Theatre in 1917, and an organ was installed in 1922. In 1939 the interior was remodeled in a Streamline Moderne style to the plans of architect Bjarne H. Moe and it was operated by Midstate Amusement Corp.

In 1990 Bon-Macy’s renovated it as as an addition to their store. Apparently the seats are still there under a false floor. The vertical is gone, but the advertisement on the back wall has been restored.

“Fantastic Voyage” was playing at the Liberty in 1967:
http://tinyurl.com/y47vj2

Here is a December 1952 ad from the Walla Walla Union-Bullletin:
http://tinyurl.com/yjxn4nw

The NRHP has another typo in its information, pasted in lostmemory’s comment of July 31, 2005. The names of the architects were Osterman and Siebert, not Osreman and Siebert.

That the Liberty Theatre should have a somewhat Rhinelandish look is not surprising. Architect Henry Osterman was born near Essen, Germany, in 1862, and only arrived in the United States in 1889. He was a builder before setting himself up as an architect, and was largely self-taught. He practiced on his own until 1912, when he formed his partnership with Victor Siebert, then a recent graduate of the Boston School of Technology.

Osterman probably maintained considerable contact with Germany, to which his three brothers had all returned by 1896. He most likely read German publications and kept up with the stylistic trends of the old country.

I detect in the Liberty’s unusual design strong hints of the Jugendstil, the German form of Art Nouveau which flourished in the late 19th-early 20th century. We could do worse than to classify this theater as Art Nouveau. I think Tudor Revival is certainly less appropriate. The building doesn’t really have much of the Tudor about it.

Thanks Joe, for the perceptive background information. I visited the site this past weekend, and indeed, the first thing I thought was: Jugendstil. The facade would be perfectly at home in, say, Riga, Latvia – which I visited not long ago.

Similarly, I think the facade looks as if it could have been designed by the noteworthy Arts & Crafts architect Halsey Ricardo, whose spectacular Debenham House in London (1906) is encased in innovative terracotta and glazed tile work.

There is access to the Liberty’s former balcony lobby, which underwent an obvious Art Deco makeover. There are touches of ‘Radio City Moderne’ to be found, but not much else.

I fully agree that if the facade had to be classified as just one style, it would be Art Nouveau.

The October 6, 1917, issue of The Moving Picture World gave the opening date of the American Theatre as August 25:

“Walla Walla, Wash.— When A. W. Eiler opened the new American theater on August 25 the entire motion picture section of the leading paper of the town was devoted to his house. The six pages which made up this section had nothing on them that did not pertain to the American theater. The feature of the opening day was Norma Talmadge in "The Law of Compensation,” handled by the De Luxe Feature Film Company of Seattle.“

I remember hanging the signs on the marquee at the Liberty when I was in high school in 1941. The pay was 85 cents for 2 hours when a new movie came, plus free access to the movies. The ladder would slide on the ice in winter. I particularly remember hanging “How Green Was My Valley” with Walter Pidgeon and Maureen O'Hara, which was difficult to fit in. On the other hand, Ronald Reagan, with the same number of letters in first and last name, was easy.

Circa 1954 photo added courtesy of the AmeriCar The Beautiful Facebook page.

My grandfather, Jack Elmo Wright, played the organ circa 1926 for the silent pictures.

Family history says he was managing the place in 1929 when the stock market crashed on Friday. He kept the receipts instead of depositing them in the bank and delivered the money to the owners

It is really nice that most of the original interior is still in place and that with minimal alteration could be restored to its initial purpose.