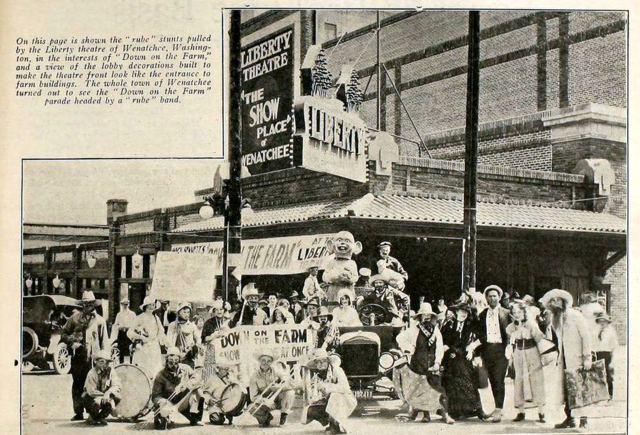 This huge old theatre was part of the Fox Theatres chain when it opened in January 1920, but Fox was forced to divest in an antitrust suit. Renamed the Liberty Theatre, it has now grown to include most of the block. I had a hard time telling where the original entrance had been. One entrance is on the ground floor of an Eagles Hall, and one seems to be in what looks like a 1960’s bank.

The giant wall advertisement is very well preserved, the word ‘FOX’ is still visible under ‘LIBERTY’, and the motto is ‘The Show Palace of Wenatchee’.

There were originally two theaters in downtown Wenatchee, the Liberty and the much smaller Vitaphone, both located on the same block. The Liberty was triplexed in the mid ‘70s with the main floor left intact and the balcony walled off and split into two small 200 seat theaters.

Sometime during the ‘80s, the Vitaphone was twinned with the small balcony walled off, creating another screen. The two theaters came under joint ownership and became the Liberty, with its current five screens. As noted above, there are two entrances. The 'bank lobby’ entrance is to the original Liberty and was actually relocated from an orginal entrance on the corner. The ‘Eagles Hall’ entrance was originally the Vitaphone.

The February 3, 1951, issue of Boxoffice said that the Liberty Theatre had recently been reopened after remodeling and redecoration. When construction of the Liberty began in 1918, it was Wenatchee’s first brick theater. The first owner of the house was N.I. Neubauer.

The Boxoffice item about the reopening also mentioned three earlier movie theaters in Wenatchee. The first theater built to accommodate both movies and stage shows in town was the Wenatchee Theatre, opened in 1905 by Ed Ferguson. Later there was a Gem Theatre, located in the Olympic Hotel building, and then a Majestic Theatre. No opening dates are given for the latter two houses.

A document prepared for the National Register of Historic Places has information about the Liberty Theatre, including the fact that it was designed by architect Edwin W. Houghton.