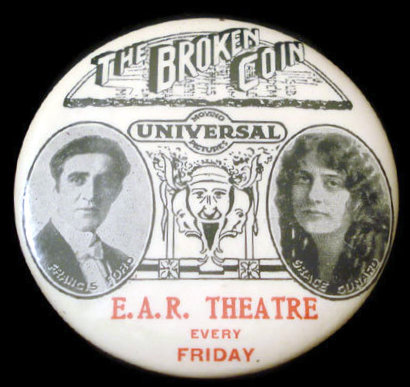 The initials of the name E.A.R. stood for the owner/builder Eli Abraham Rysden of Chicago, who founded this theatre which opened on January 17, 1914 with 892 seats. It was one of the few “reverse” or ‘backwards’ theatres in the nation. It was in the neighborhood of Normal Park in Chicago, as told in a reminiscence story by the late John (B. Andrew Corsini) Fowler in MARQUEE magazine of 4th Qtr., 1992. The theatre did have a Wurlitzer pipe organ of five or six ranks (voices) at one time. The organ was played for many years by Eli’s daughter Martha Rysdon. The brick facade was Arts & Crafts style in feeling with a two-story recessed entry holding the island ticket booth below large casement windows at the rear of the recess that overlooked the lobby. The lobby was to one side of the two small storefronts that completed the rest of the facade which also had a dark tile coping to contrast with the light color brick.

In 1934, a new V-shaped marquee with small vertical sign projected from the building as shown in the facade photo in the article, and now it was not just the theatre’s name in an arc of bricks in relief that adorned the face of the theatre. The new marquee was in ‘negative’ with clear white, back-lit letters on a dark ground in three lines. The price of the day in large neon was “25 cents” as seen either side of the bottom of the vertical on the marquee’s end panel. Triple lines of neon adorned the borders of both the vertical sign as well as the marquee. The lobby ended in a curving wall from one side of the building to the other with doors at its sides leading into the auditorium on either side of the screen, and one proceeded up any of three aisles to turn around and be seated to face the screen. Thus, one entered at street level, walked down a ramp to the foyer area, and the up upon the aisles of the auditorium. Exitways on either side led up to the alley elevation at the rear. A simple, modest Art Deco motif characterized the theatre with its 720 seats after the 1934 remodeling, which was carried out by the firm of Pereira & Pereira. Abundant public transportation in the neighborhood made the E.A.R. Theatre successful up until around 1963 when it met its end as the land was cleared for other uses, ending one of the few “reverse” theatres in the nation if not the world.

Although not originally built as “reverse” theatres, remodels at two Cleveland, OH area theatres, the Shaker Square Cinema (formerly the Colony Theatre) has two screens that are “reverse” when you walk in, and the now-closed Centrum Theatre (formerly the Heights Art Theatre) had one “reverse” screen. In both cases, these were both old single screen theatres that were cut up…in Shaker Square’s case, six (the main floor became four screens and the balcony two screens), and the Centrum, three screens (two on the main floor and one in the balcony). I am guessing that “reverse” screens are common in older theatres that are megaplexed from their original auditoriums.

The architect appears to have been F.E. Higgins.

Remodeling was in late 1934, by Pereira & Pereira.

“This $15,000 job was carried on without interfering with the regular daily programs. It was started two months ago and completed yesterday. Nine hundred new seats and a new screen have been installed. The interior has been redecorated in dark blue and French gray, with the new lobby done in light blue and tan.”

According The Englewood Times, the E.A.R. Theatre opened on Saturday, January 17, 1914 with a 2 o'clock matinee, followed by their regular program at 7 p.m.

Here is a January 1915 ad from the Suburbanite Economist:
http://tinyurl.com/qj7rje

The principals of Pereira & Pereira, the firm that did the 1934 remodeling of the E.A.R. Theatre, were William Pereira and Hal Pereira. Percival Pereira was an older architect who was never a member of this firm.

Found a photo of the E.A.R. Theater just now while looking for something else. Apparently the building lasted well beyond 1952…this collection is from a photographer employed by the Chicago Department of Buildings to document structured officially condemned by the city.

Found a photo from my Dad’s collection of most of the Chicago area theatres. He was the salesman who sold most of them. He worked for Whiteway Sign Company

One of tne screens(screen 3?) in the now closed Picadilly Theatre in Perth, Western Australia, Australia was a reverse theatre too.