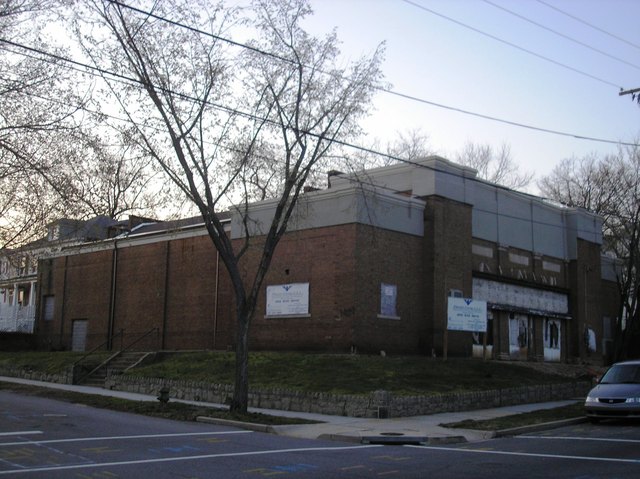 The Jesse Theatre opened early-November 1927 with “Smile, Brother, Smile”. It was a first-run movie palace and was the only movie theatre in the D.C. area to be designed in an Atmospheric style, with ‘stars’ in the ceiling. It later went over to screening art films and in 1958 was renamed Stanton Art Theatre. By the the late-1970’s, the theatre had become an adult movie house. It was closed in the early-1990’s.

It is now a church named Capitol Temple.

Thank you “lostmemory” for setting the record straight! But were there two Stantons? What theatre was at 513 C St. (no quadrant given)?

Does anyone out there know anything about the Stanton? Ever attend movies there? Live in the neighborhood? Know what’s left inside the theatre? Any efforts to save and convert to performing arts center?, etc. etc.?

The C Street address in Washington S.E. sounds correct as a start. laIn the late 50’s, the theatre showed revivals (The Birth of a Nation, later Chaplin films, foreign filmes), perhaps of films whose copyright had lapsed or was questionable. Afterward, perhaps in 1959 or 1960, the management moved the theatre’s policy and its name to the 18th Street N.E. address listed above. In fact, the management seems to have taken over a whole group of theatres in Baltimore (Cameo), Philadelphia, and New York, and afixed the word Art to the theatre name, with similar programing. The word Art would often precede the theatre name, to bring the house to the top of alphabetical listings. The 18th Street Stanton Art later featured sex films.

I show ads that this was already running X in 1968.

I can answer the question about the DUAL ADDRESSES. The STANTON was on C Street on Capitol Hill and served for decades as a normal neighborhood theater. Then in the late 50’s someone got the smart idea of calling it the STANTON ART THEATRE and booking a long running revival of BIRTH OF A NATION at inflated prices. Big success! It ran about a year or more. Then they tried other classic films as well. At some point, possibly because of crime, they moved the name STANTON and the classic film policy to the former JESSE theatre in NE. The JESSE, a neighborhood double feature house, became the STANTON. They played classics such as THE BLUE ANGEL at inflated prices (about 2 ½ times regular prices) with fair success. But as Washington became more engulfed in unchecked crime, the STANTON played X films breifly; then shut down. Jesse James would fear for his life in the JESSE’s neighborhood circa 1975.

Here and here are photos from March 2008 of the former Jesse/Stanton. The building is currently being restored and refitted to be used as a church.

In the early 60’s I remember going to a dumpy theatre in N.E. somewhere to see what were then called smut or Adult films. They were usually films shot at Nudist Camps. Does any one remember that Adult house.

In the 1950’s, the Stanton Art Theater was one of the very few venues which featured Charlie Chaplin’s films, as Chaplin and his work had been blacklisted by the HUAC. My dad used to take us kids to see such classics as The Goldrush, Modern Times, and The Great Dictator.

The good sisters at the Catholic grade school we attended were horrified that we were exposed to such “radical ideas.” When this was related to my dad, he calmly explained that this was a good point in life to start the process of becoming a critical thinker, a somewhat radical notion in the 1950’s.

Another thing I recall about the Stanton was the old fashioned iron watering troughs, charming relics of the horse and buggy days, which somewhat offset the fact it was in a very rough neighborhood.

The above picture is of the Stanton Art Theatre at 3100 18th Street Northeast, Washington.