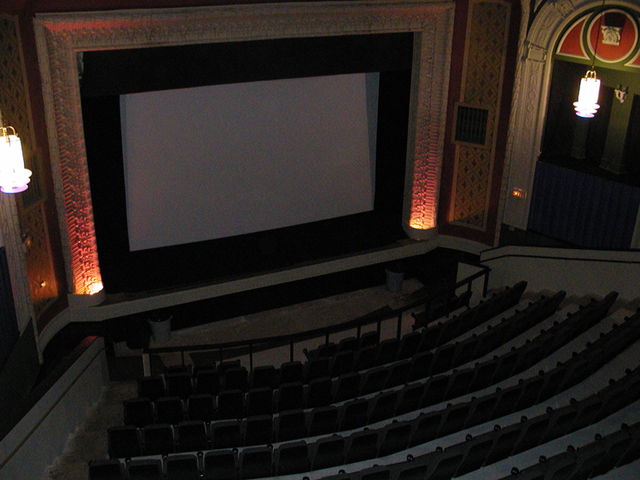 The Grand Theatre was opened November 8, 1910. By 1941 it was listed with a seating capacity of 900. Very nostalgic…smells like you are going back in time. The balcony seats, lights, even curtains make it seem as if you are going to see a Wild Buffalo Bill show live!

There is something about this theater that makes people clap at the end! One of the town’s truest treasures to marveled at!

Here is the official website for the Grand Theatre.
View link

The Grand was apparently operated for several decades by members of the Hiller family. The Grand Theatre was being managed by C.L. Hiller at least as early as 1929, when the July 6 issue of Movie Age said that sound equipment was being installed n the house. A 1937 Boxoffice item said that the Northern States Amusement Company was operating the Grand, Lyric, and Royale theaters at Crookston.

Northern States might have been the Hiller family’s operating company even then. In 1985, the June issue of Boxoffice said that Jeff Hiller was the head of Northern States Amusement Company, but that item and the 1937 item are the only appearances of the company name I’ve been able to find in Boxoffice. C.L. Hillers brother, Ernotte Hiller, was operating the Grand at least as late as 1973.

A history of the Grand Theatre written by University of Minnesota student Brooke Helgerson and dated 2011 is available in this PDF file. It says that the theater opened on November 8, 1910. It was designed by J. A. Van Wie and Theodore Hays of the Twin Cities Scenic Co. in Minneapolis.

An item about the project in the May 21, 1910, issue of The Improvement Bulletin referred to the proposed opera house as “practically fireproof.” Practically wasn’t quite enough, though. Helgerson’s history says that the auditorium was gutted by a fire in May, 1914. The Grand reopened in September that year, and in 1917 its operation was taken over by Charles Hiller. Members of the Hiller family would continue to operate the Grand until 2005.

The Grand Theatre has been altered several times over the years, with a concession stand being installed in 1949 and a new marquee in 1954. A second screen was installed in an adjacent space in 1984, leaving the original auditorium intact for the time being. The most drastic alterations came in 2005, when the new owners, Moore Family Theatres, removed the balcony and reconfigured the auditorium for stadium seating. Despite these changes, the theater retains much of its original decoration.