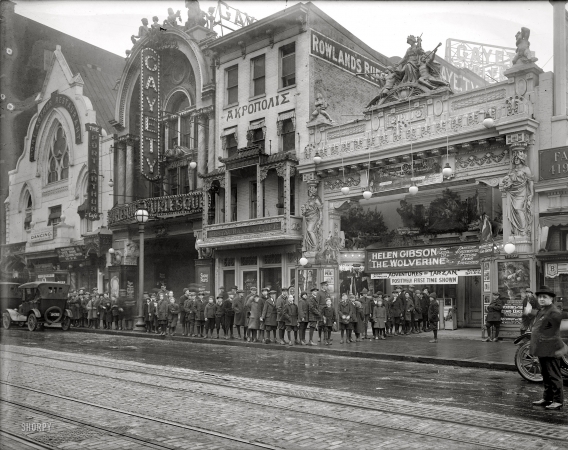 The Gayety Theatre was opened in 1907, designed by architect William H. McElfatrick. Its exterior was a mix of Beaux-Arts and Neo-Classical styles. Its facade was framed by two sets of columns, which supported a large arch covered with terra-cotta decor. The three-story building’s auditorium was an equally ornate Edwardian music hall, complete with gilded plasterwork and an asbestos fire curtain painted with pastoral scenes. The auditorium held two balconies and four sets of boxes. The interior of the Gayety Theatre was very similar in style to that of the Bushwick Theatre in Brooklyn that McElfatrick would design a few years later.

Originally, the Gayety Theatre was a burlesque and vaudeville house, though not the burlesque of the 1940’s and 1950’s. This earlier form of burlesque was closer to comic acts than the striptease of the better-known later form. While the Gayety Theatre later began to show movies as well, it would only remain a secondary form of entertainment for the entire course of the theater’s history, which, by the 1940’s, would include the later form of burlesque.

In 1950, the Gayety Theatre became the Shubert Theatre upon its acquisition by the Shubert organization, and switched to legitimate theatre. It would remain so until it was closed almost ten years later. The Shubert Theatre, while still in good shape, was unfortunately demolished in 1960 to make way for a parking lot.

As I remember it, the Shubert was closed due to a fire (not sure when). I attended plays there in the 50s, including the pre-Broadway tryout of Two for the Seesaw with Henry Fonda and Ann Bancroft. Bookings were rather scarce, while the National, as the only other D.C. house at that time for Broadway tours and tryouts, was almost always occupied. 9th Street was filled with pinball and tatoo parlors, and another theatre across the street and perhaps a block away featured “Burlesk.”

I also saw Two for the Seesaw with Henry Fonda and Anne Bancroft here, as well as 3 other Broadway shows. It was nice to have two legit houses in DC for a few years in the ‘50’s.
Concerning the theater’s longer-term use as the GAYETY BURLESQUE, please check this cite for the CENTRAL theatre, Washington, DC —– the final resting place of burlesque in DC.

Younger people might not believe what BURLESQUE was really like in the ‘50’s. There were usually no more that 3 strippers, normally mature and overweight, who slowly stripped to almost-nude. There was a band of no more than two musicians, and a really dreadful MC who also served as comedian and also hawked a few things they sold. The audience, in a theater like this which had over 1000 seats, was seldom more than 50, often as few as 15. It was a pathetic site, born losers (like me) pretending to enjoy a sex show which was as sexless as watching grass grow. Later when the Sexual Revolution and The Pill came along circa 1960, pretty young girls became strippers, but in night clubs, not burlesque. Burlesque was dead, and who cares?

If the plans of the Washington Stage Guild come to fruition, the site of the Gayety/Shubert will once again house a legitimate theatre; a 250 seat house scheduled to open in the spring of 2008.

rivjr’s description of a burlesque show at this theatre in the 1950s is totally different from my experiences watching “burley” during the same time period in Boston. We had 2 old theatres, the Old Howard and the Casino; both showed 2nd-run movies in between stage shows. The shows on Fri. and Sat. nights (around 8PM) and the Midnight shows that followed were often sold out. The striptease dancers were mostly young, some in their late-teens, and they ended up nearly nude, and after 1960, totally nude. There were low-brow comedy acts in front of colorful backdrops. There were 3 to 5 musicians in the orchestra pit. The Old Howard was closed by police action in Nov. 1953 and the Casino was closed by Urban Ruin-all in May 1962. I loved these shows and did not have the negative impressions in Boston that rivjr had in Washington.

So there are two burlesque places practically across the street from each other called the Gayety. This is a 1945 Life photo that I will post here, but if it’s the other one let me know.
http://tinyurl.com/5uc5h2

Here is an informative article about the Gayety Theatre by John DeFerrari. There are several photos of the Gayety and nearby theaters and restaurants.