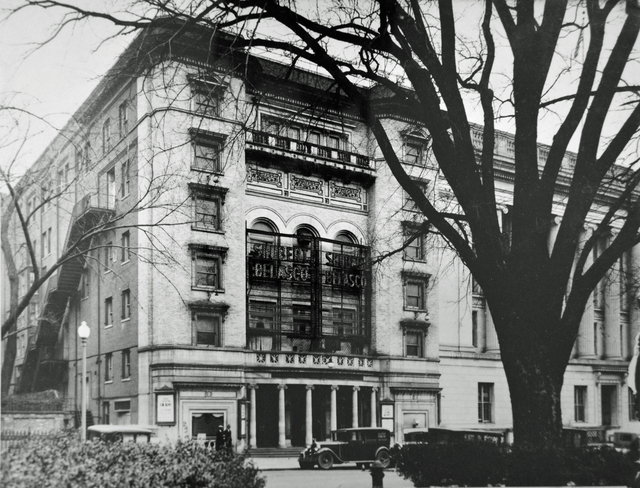 The Lafayette Square Opera House was built in 1895 on the site of the 1830’s Rodgers House, of one Washington’s more famous 19th century residences, which was razed in 1894. Designed by the Chicago firm of Wood & Lovell, the opera house overlooked Lafayette Square and was built for Uriah H. Painter.

The six story building had a soaring facade, with Ionic columns framing the main entrance on Madison Place, as well as below the huge cornice. The beige brickwork was decorated with three panels over the triple arches filled with windows over the main entry. The auditorium, which could seat about 1800, was a blend of Beaux Arts, neoclassical and Italian Renaissance styles, complete with lavishly ornate gilded plasterwork, three balconies, thirty boxes and a graceful but towering proscenium arch, again, coated with gilded plaster decor.

Along with the National Theatre, the grandiose Lafayette Opera House was the main venue for opera, plays, and ballet at the turn of the 20th century in Washington. Among those to perform on its stage included Enrico Caruso, Sarah Bernhardt, Maude Adams, and Ethel Barrymore.

In the early-1960’s, with the reconstruction of Lafayette Square, many of the Belasco’s neighbors were razed, until finally, in 1964, the Belasco Theatre itself was torn down to make way for the new US Court of Claims Building.

Katharine Hepburn mentioned this theatre as one of many she performed in, in the early days of her career, on the Dick Cavett show DVD from 1973.

Was there a Belasco Theatre in NYC at 111 West 44th Street that opened in 1907? It was originally called the Stuyvesant.

As the Lafayette Square Opera House, this theatre was listed in the 1897-98 edition of the Julius Cahn Official Theatrical Guide, under Washington DC. It was one of 6 theatres listed in Washington, the others being the Academy of Music, the Bijou Family Theatre, the Columbia, the Grand Opera House, and the New National. The Lafayette Square was managed by John Albaugh, it was on the ground floor, and had electric illumination. The seating: Orchestra & mezzanine 650, Balcony 400, Gallery 450, Boxes 48; total: 1,548 seats plus 500 standing room spaces. The proscenium opening was 31 ½ feet wide X 39 feet high, and the stage was 49 feet deep. There were 9 in the house orchestra. The population of Washington in 1897 was 300,000.

Boxoffice Magazine issue of March 2, 1935, ran an item saying that Matty Radin, operator of the Cameo and Acme theatres in New York, as well as the Auditorium Theatre in Baltimore and the Majestic Theatre in Boston, had converted the Belasco in Washington to a movie house, and that it would feature foreign films. His other theatres were all showing foreign films, and the Belasco was to be the fifth theater in a proposed chain of twelve cinemas bringing foreign films to eastern and mid-western cities.

I’ve been unable to find out if Radin was able to fulfil his plans for expansion, but there are a couple of references to his New York theaters in articles published by the New York Times in the late 1930s. Apparently he ran a lot of Soviet movies during the period, and The Times refers to him as “Tovarich” and “Commissar” Radin.

Street view should show east side of Lafayette Square (Madison Place, N.W.) just north of the White House, not this distant part of Northwest (Madison Street).

This is a closer view of the actual site: http://g.co/maps/gcvep

The theater had been closed more than 20 years when the Kennedy Administration went ahead with an overhaul of the buildings around Lafayette Square, tearing down the theater and erecting the much larger U.S. Court of Claims hulking behind the old buildings on the square.