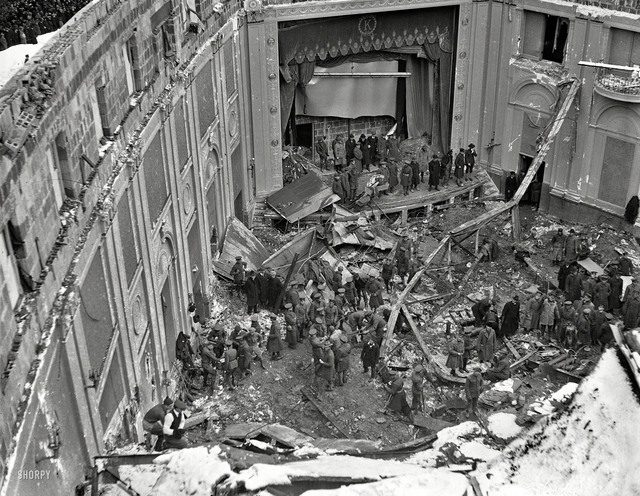 The Knickerbocker Theatre was built in 1915 for Harry Crandall, who owned a small chain of theatres in Washington, including the Lincoln and Metropolitan Theatres (and later, the Tivoli). It was designed by Reginald W. Geare on Columbia Road, with a sedate Georgian Revival façade that followed a curve on Columbia Road. The three-story façade, of limestone on red brick, also had touches of Colonial Revival and Neo-Classical styles. The interior of the 1,700-seat movie house was a graceful and not overly decorated blend of Adam and Neo-Classical styles.

The Knickerbocker Theatre opened on October 12, 1917, with the historical drama “Betsy Ross” and an appearance by the film’s star, Alice Brady.

On January 28, 1922, during an intermission in the hit comedy film, “Get Rich Quick Wallingford”, while the orchestra was playing, the Knickerbocker Theatre’s poorly constructed roof collapsed after a heavy snowstorm over the past two days had piled almost two feet of snow on it. After the cave-in, 98 people were killed and 136 injured, in what was then Washington’s worst disaster. Crandall closed all of his theatres in sympathy for the dead after the Knickerbocker Theatre disaster for a week, and was not charged with any wrongdoing, which was not the case of Reginald W. Geare, whose career as the most popular theatre architect in the District of Columbia up until that time came to an abrupt end. He killed himself in 1927, as did Harry Crandall, who later went bankrupt, a decade later.

In 1923, Thomas Lamb was hired to build a new theatre in the shell of the Knickerbocker Theatre, which would be called the Ambassador Theatre. (Harry Crandall would also replace Reginald W. Geare with Thomas Lamb on his next project, the Tivoli Theatre). Lamb’s theatre retained Reginald W. Geare’s façade, which Thomas Lamb would embellish, but the rest of the theatre was all new. Thomas Lamb’s interior was a blend of Adam and Neo-Classic styles, somewhat more ornate than the Knickerbocker Theatre, but nearly the same size. The 1,800-seat Ambassador Theatre opened on September 20, 1923 with the Warner Bros. film “Main Street” starring Florence Vidor.

By the 1950’s, the Ambassador Theatre was struggling to keep up with competition from television, and its owners opted to raze the historic theatre in 1969, after years of low attendance. A bank was constructed on the site in 1978.

They say this is the site of the theatre:

I made a mistake in my comment on June 10th. The correct title of the film is JOHN GOLDFARB PLEASE COME HOME.

The Ambassador was one of two theaters in Washington to play Alfred Hitchcock’s DIAL M FOR MURDER in 2-D, without glasses. I’ve posted an ad for opening day, May 27, 1954.

More information can be found in this article: http://www.3dfilmarchive.com/dial-m-blu-ray-review

My Uncle was in the Knickerbocker theater the day it colapsed. heard sone noise and he and many others left by the exit. he was in the exit door archway as the roof fell in. he lived on champlain st. NW. 1 block away.

FYI. The Shorpy Higginbotham Facebook page and website has a detailed photo that will enlarge, of the aftermath of the collapse.

I uploaded the 1-29-22 roof collapse photo from the below Shorpy link.

Another article about the collapse.