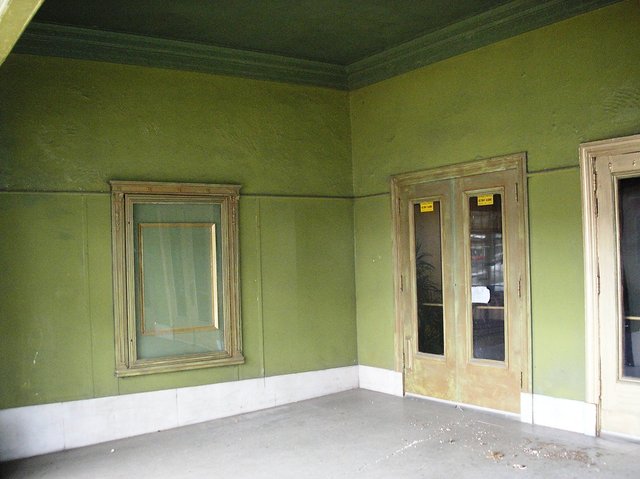 The Takoma Theatre opened on July 2, 1923 with Thomas Meighan in “The Ne'er Do Well”, with 724 seats. It was designed by John Jacob Zink, who also designed the Uptown Theatre in Washington, the Commodore Theatre in Portsmouth, Virginia, and the Senator Theatre in Baltimore, Maryland among other theatres. It is located at the corner of 4th Street and Butternut Street in the Takoma neighborhood of Washington, DC. In 1935 it was taken over by Warner Bros. Circuit Management Corp.

The theatre flourished for many years but was eventually driven out of business by the growth of multiplex theatres and closed as a movie theatre in 1980. In 1983, the theatre was purchased and turned into a venue for live performances. However, during the 1990’s, the Takoma Theatre stood largely dark, though the comedian Chris Rock did film one of his specials at the theatre.

In early-2002, community members formed the Takoma Theatre Arts Project, with the goal of reopening the theatre. The theatre is ‘For Sale’, and is endangered.

I think that somebody had better take a second look at the “Official” web site above.

My family moved to the Takoma Park area in 1956 on Underwood Place Northwest. There were only two other African American families that we knew of in the area, most family were white and didn’t have any experience, patience or the desire to share their neighborhoods with us. We had lived in the inner city of Washington DC where African Americans were in the majority and out neighbors looked like us. No matter where we went (Playground, Swimming Pool, School, Store) some while boy or man would call shout names out of their house window or car window, mostly the “N” word. But, coming from the inner city, we loved Takoma Park.

During the winter months would make money shovelling snow for money and spend it all at 4th and Butternut. There was a “Highs” store, People’s Drug Store, a Hardware Store, Mr. Greenes Shoe repairs and of course the Takoma Theatre. Many cold winters my friends and I would warm up on “chicken Noodle soup” we purchased from People’s Drug Store’s carryout counter. Most times we had to eat it outside but, ocassionally depending on who was working, we’d eat inside. One year my brother, sisters and I had saved all our money. We agreed to buy our mother a christmas gift so, in three feet of snow, we walked to the Hardware store at 4th and Butternut and brought this Black electric Cat Clock. The clock was outlined in rhine stones and the tail moved left to right. After returning home with our gift we and seeing how beautiful it was, we surmised that it costed much more than the seven dollars we had paid for it. We concluded that the old man running the Hardware store was being nice because it was christmas season and sold it to us for a good price.

We spend many weekends in the Takoma theatre. Sometimes staying there all day watching movies over and over, we loved it there.

Still today my mother and father are enjoying retirement life in the same home they raised us in at Underwood Place Northwest.

I made friends in that area who are my friends today. I met my wife of 34 years in Takoma Park.

The Takoma Park area isn’t as nice and quiet as when I was a child but the residence care deeply about their community and it continues to be a great place to raise a family.

I lived on Cedar Avenue, just several blocks from the Takoma Theater. We used to go to the matinee every Saturday for a dime. My brothers also went when they became a little older. What wonderful memories I have of that theater. I actually met my future husband there when I had just turned 16, in August of 1954. His name was Tommy Voigt. He was there with his best friend Billy Horton. The movie playing that day was “The River of No Return”, starring Robert Mitchum and Marilyn Monroe.

My Father also attended Takoma Theater when he was a child. I have an old photo of the theater. I believe it shows the movie that was playing when the photo was taken. Haven’t looked at it for years. It would be wonderful to see it totally restored. (Barbs Hering Voigt Dove)

The photo you posted is private.

Here and here are February 2008 photos of the Takoma Theatre.

The Washington Post reported on January 30, 1971 that RKO-Stanley Warner Theaters sold the Takoma Theater building to William Wolowitz for a price in excess of $100,000.

here’s a link to the Takoma Theatre Conservatory – they are hoping to reopen the theatre for the arts:

“Once again community members are seeking to light-up the theatre. Unlike prior efforts, the Takoma Theatre Conservancy is seeking to acquire the theatre from the owner [Note: The Conservancy is not associated with its current operation or leasing.] The Conservancy will seek to renovate the theatre and revitalize it as a community resource â€” a community cultural arts and education center â€" a place once again for community events and activities, and a resource to help rejuveÂ­nate the adjacent commercial area. The Conservancy will engage professional management and host a wide array of theatrical, film and musical programs; support a variety of theater and arts groups and local performers; provide classes for people of all ages, especially youth who lack access to arts in their schools; and offer vocational training and internships for high school students and young adults. (see Goals)

With the renaissance of DC and its neighborhoods, increased community and government support for the arts and education, and performer and audience demand (more â€¦), the feasibility of these goals appears stronger than at anytime in the last thirty years. The Conservancy has received several planning grants to support these goals, most recently and notably a $100,000 grant from the DC City Council (News), and contributions from community organizations, and major donors.

The Theatre has always been â€˜familyâ€™ to the Takoma community. It was opened in 1924 by a community group called the Takoma Theater Corp., led by the then Mayor of Takoma Park, MD. They brought first-run feature films to one of Washington’s first suburbs. Two blocks from the old Takoma railroad station, it became one of the major locations for community and family activities, including the starting point for the annual Takoma Fourth of July parade, and weekly yo-yo contests.

The once enormous appeal and attractivenss of local neighborhood theatres and downtown movie palaces were drained in the decades following 1950 by new suburban malls, multiplex theatres, and television. The Takoma and other DC theatres, such as the Strand, Howard, Colony, Congress and MacArthur, became dark, and many were converted to other retail uses (more …)

Subsequent efforts from the mid-1980â€™s to 2004 achieved some success in once again lighting-up the theatre and the adjacent commercial corridor — just two blocks from the Takoma Metro station. The non-profit community group, the Takoma Theatre Arts Project, ably demonstrated the promise of the theatre as a performing arts venue. (more …)

Community efforts to save the theatre from closure led to the first Takoma Park Folk Festival in 1978. Today this highly-popular event is still run by an all-volunteer community committee and showcases local performers — the legacy of its founder, activist Sammie Abbot (Mayor Takoma Park, 1980-1985).

“I remember Sammie calling several of us over to his house for a meeting… . He said, ‘We’ve got to save the Takoma Theatre, and here’s how we’re going to do it.’ â€ [2]

Thirty years later. Weâ€™ve got to save the Takoma Theatre, and with your support we can do it. (The Takoma Theatre Conservancy is a 501©(3) non-profit organization. Your contributions are tax deductible.)"

Looks like it may be converted to luxury condos.