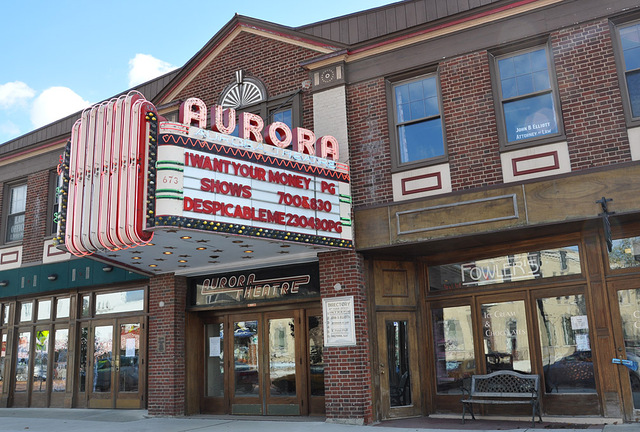 The Aurora Theatre opened in 1925 with a screening of “Madam Sans Gene” starring Gloria Swanson. Bob and Helena bought the Aurora Theatre in 1981 and ran it very sucessfully until 2001. It was then sold to a very wealthy businessman who kept both Bob and Helena on to oversee the theatre’s operation. Bob recently retired but Helena is still there.

One of the first things the new owner did was a beautiful architectually designed renovation. The integral ticket wicket was removed and a free standing ticket booth installed. An adjacent storefront was incorporated into the lobby area which increased its area by several times.

The exterior had been sort of Art Deco but is now Neo-Classical. The beautiful marquee and all its lovely neon was left untouched. An upscale candy store occupies the remaining storefront in the theatre complex.

I first went to the Aurora Theatre around 1984, and even by then a false ceiling had been installed and all the interior walls covered in pleated sound curtains. Despite (what I consider) these shortcomings, you still have the feeling that you’re in a real theatre. Its DSS, large screen, and spacious auditorium make seeing a movie at the Aurora a memorable experience.

The Aurora operates seven days a week, usually incorporating sixteen shows per week. It’s generally a second run house but because of its proximity can often get first run films. Like now, for example the Aurora is in its second week of showing “The Terminal”. You’ll generally only see mainstream non-R-rated films at the Aurora. The East Aurora Film Society does, however, lease the theatre for matinee showings about eight times a year for showings of semi-mainstream films. I saw “Whale Rider” at one of these matinees

I’ve been to the Aurora probably more than a hundred times and had I owned the theatre I definitely would have been pleased with the attendance every time I was there. East Aurora is full of movie-goers who have a great theatre in which to see movies.

The Aurora theater, though popular and well attended is highly overated.

The improvements and updates when purchased by a corporation were done well, the overall experience is less than adequate.

The prices are fair, the projection and quality are average for an old theater it certainly does not compare to any of the chain theaters. Sound is below average.

the screen is VERY distant from even the first rows and this affects the viewing the quality. The white paint touch up on the screen looks terrible and the whole thing needs to be replaced.

Concessions are fairly priced and more often fresh than not.

Parking is terrible but that is not the theaters fault.

Seating comfort is terrible. In fact beyond terrible. Uncomfortable, thinly padded seats in aisles that are amazingly narrow. They should do themselves a favor and rip the seats out and buy new ones and only put in 2/3 of them to spread things out.

The real disappointment with this theater is the snarky staff. They have an attitude, like most in this town, that they are something special. Buying tickets and waiting to be admitted is no better than a cattle call and politeness does not seem to exist, especially from the old lady ticket seller.

This theater was a class act when the Blatt Bros owned it and the couple that owned it after them, not any longer.

There is little else to do in E.A. in the evenings so this theater will thrive but it is too bad that the town that does not want a Wal Mart thinks a corporate owned movie theater still makes it a little town.

the theatre is fantastic.. the previous reviewer clearly has issues outside of the theatre.

the staff and the seating are most comfortable. the quality of sound, picture and the environment is top nothch. the prices can’t be beat.

The concessions have become more expensive but still fairly priced. Popcorn is fresh more often then not and the pop is mixed correctly.

The staff is still pretty unfriendly and would do them well to crack a smile once in awhile. Especially the ticket seller.

Poor management of lines/crowds for a popular film.

Seating comfort is by far the worst of any theater I have ever been to.

The screen is still in poor shape as the white aint touch up job is very evident.

Not a bad place to see a film but it may be worth driving another 6 miles to Regal, 8 miles to Dipson or 9 miles to Hamburg Palace.

The theatre, the stuff, the reasonably priced concessions (still 50% cheaper) , the restored historical main street (with cobbled brick main section) and the respect for the small business person are all what make The Aurora Theatre top of the list for independent theatres in both Western NY and the country. Our repeat patron keep telling us so.

we are pleased announce that our box office manager has been awarded this prestigious honor for her many years of hard work and community care that she puts into the theatre , every night.

Please check out next issue of Box Office Magazine for further details.

Theatre has upgraded to digital projection.

At the time the theater was completed there was a Winer & Sons organ installed.

Just watched the TV Christmas movie A Prince for Christmas. Filming was done in East Aurora and the exterior of the theater can be seen in several scenes.

Exterior of theatre is shown in the film Cold Brook.