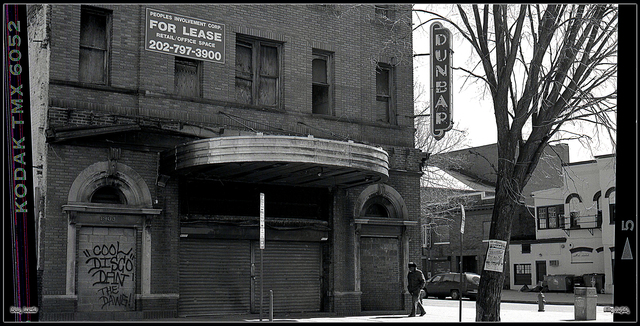 The Dunbar Theater, in the Shaw neighborhood of Washington, not far from the larger and equally historic Howard Theater, is located on 7th Street at T Street.

The Dunbar Theater opened October 18, 1920, designed by Isaiah T. Hatton in the earlier Southern Aid Society Building. From the time it opened, until it closed in 1960, the nearly-350 seat Dunbar was a popular venue for live entertainment, including many legendary jazz and blues artists, such as Duke Ellington, who appeared on the Dunbar’s stage during the 1930’s. The theater also showed movies.

Though there have been several plans to restore and reuse the landmark Dunbar Theater (which was added to the National Register of Historic Places in 1986), none of them have yet come to pass and the theater sat forlorn and vacant until it was converted into a Wells Fargo bank.

The Dunbar is being converted into Condos. I was by there in November and saw that the roof had been replaced and the interior work was coming along. If you have 200 thousand plus you can get a place there.

Courtesy of the Smithsonian

actually, the dunbar is now an apartment building. they will probably be converted though.

I think it’s erroneous to describe the DUNBAR as equally historic as the nearby HOWARD. Nobody living today is old enough to remember stage shows at the DUNBAR, but the much, much larger HOWARD just across the street was the site of LIVE stage shows featuring hundreds of Black performers such as James Brown, Pearl Bailey, Little Richard and virtually every rock n roll star of that era. The DUNBAR served the community as a double feature movie theater at an admission price of about 1/3 the price of the HOWARD (both were bargains by any standard) until sky high crime in the Shaw area ruined everything.

The DUNBAR is right now being converted to a Wachovia bank, as extensive renovation of Washington’s long neglected town houses is now just one block from the DUNBAR.

Make no mistake, the HOWARD was equal to the APOLLO in New York when it came to presenting live entertainment.

There is a more recent photo of the building on this page:
http://tinyurl.com/le2yxk

It’s now a Wells Fargo. The sign is still there though.