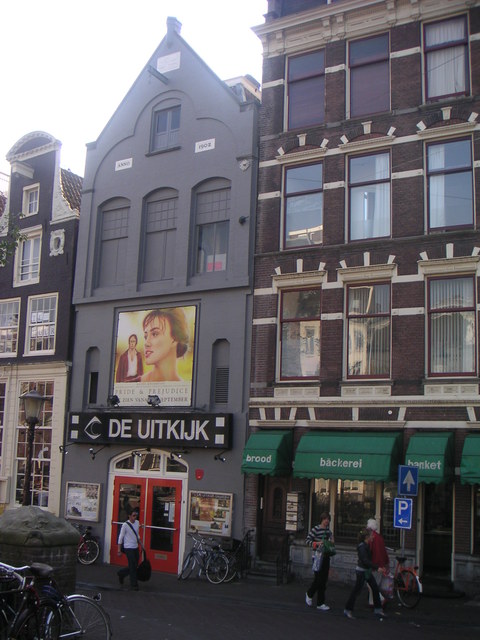 This tiny, long theatre is situated in a typical small Amsterdam canal-warehouse, on the Prinsengracht canal. It opened on March 26th 1913 as the City-Bioscoop, a cinema for the upper class (hence it’s location). They tried to show films which had a certain quality, and were different from the circus ballyhoo that was still being shown here and there. They also showed films in Kinemacolor, and were the only Dutch cinema to do so. On November 9th 1929, the City-Theater as it was called then, showed it’s last film, “Don Q”.

Then the theater changed into the first Avant-Garde theater of the Netherlands, De Uitkijk (the Outlook). It became a ‘club house’ for independent filmmakers and artist who were members of the Filmliga, and had their own private screenings of art films from Russia, France and Germany.

In the last couple of years, the cinema which, due to it’s architecture, can’t offer much of the luxury the bigger art houses have, shows second run art house films. Sometimes a single title can run for several months.

De Uitkijk is currently closed for renovation. The small auditorium will feature sloped seating (semi stadium seating) and reopen as a Documentary-only theatre or perhaps a repetory house.
Some other recent photos can be seen here in my Flickr stream: View link

The Uitkijk has reopened some months ago and is now succesfully up and running with a new crew of volunteers, showing classics and documentaries.