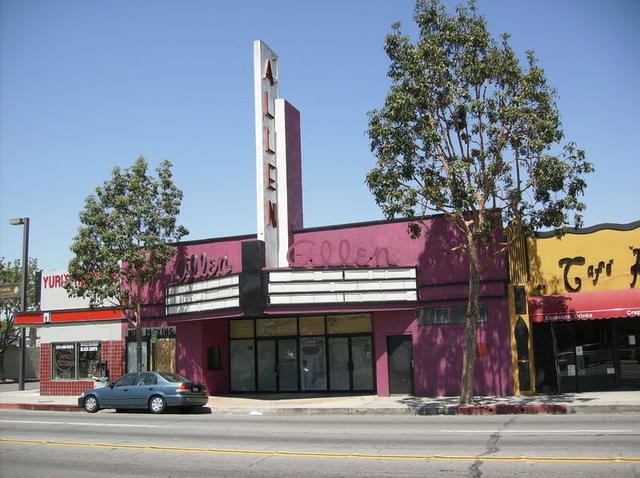 South Gate’s classic small neighborhood movie house going back to 1924, when it opened as the Garden Theatre. It was remodeled in 1936 to the plans of architect Clarence J. Smale. It was still showing movies on its single screen well into the 1980’s. A real survivor, in 2004 the exterior was little changed except for removal of the ticket booth and it became a venue for live rock music performers. In its heyday, it was affectionately known as “the flea pit”.

I had lunch at a pizza place a few doors down from the theater. This was my first time in South Gate other than driving by on the 710.

An interesting item appears in Boxoffice of April 4, 1942. It is about an arbitration complaint filed by L.W. Allen, operator of the South Gate Theatre. The Vogue Theatre in South Gate, operated by Fox West Coast, had been given a 91-day clearance over Allen’s house. The thing I found most interesting was that the arbitrator named to handle the complaint was the noted architect, John C. Austin.

Robert J. Allen is named in Boxoffice of May 20, 1950, in an article about a suit he had filed against National Theatres, Fox West Coast, and eight major distributors. The suit charged that Allen’s Avon Theatre in South Gate had, since 1940, unfairly been subjected to an arbitrary zoning system forcing it to run movies from 91 to 126 days after houses operated by Fox and Warner in the same zone. The item doesn’t mention L.W. Allen, but it seems likely that the two Allens were related.

A May 4, 1973, Boxoffice item says that Allen Theatre owner Hugh Dallas had announced a return of the house, the only theater then operating in South Gate, to a policy of family movies.

On May 25, 1924, the Los Angeles Times announced construction commencement of a Class B one-story, brick building at Tweedy and San Gabriel. Plans showed store rooms in the front and a rear section designed for â€œtheatrical and motion-picture purposesâ€. At the time of the news release, a five year lease for the theater had already entered into by 2 parties identified as Johnson and Martin. July 21, 1924, there was a progress report in the same paper stating construction would be complete in approximately 45 days. Once opened, the portion of the site devoted to entertainment activities was known as the â€œGarden Theaterâ€. The building address was 3807 (not 3809) Tweedy Road (now Tweedy Boulevard) per the 1932 â€" 1933 South Gate Directory at the South Gate History Museum. The two most obvious explanations for the address discrepancy are: 1) either the address is a misprint (currently Yuriâ€™s Records is at 3801 Tweedy and the Allen is at 3809 Tweedy with nothing else in between), or 2) The address changed when the previously mentioned 1936 remodel took place and the building was widened. At the time this outlying section of Los Angeles was part of the Home Gardens tract (later annexed by South Gate). The â€œGardenâ€ name is reflective of the Home Gardens locale.
A Los Angeles Times news item (August 4, 1927) mentions the Camp Fire Girls of Magnolia Park (a nearby tract that was also eventually annexed by South Gate) were presenting a fund raiser show at the Garden Theater.
A display ad from the Los Angeles Times – dated September 4, 1927 â€" announces the Garden Theater of Home Gardens would be participating in the 10th annual â€œParamount Weekâ€ â€" a studio promotional event. This meant showing only Paramount Movies for a designated seven day time frame.
Oliver Mitchell/Morosco suffered health set-backs in the 1930â€™s. The first occurred in 1934 when he had a heart attack. In 1936 he sustained a serious head injury as the result of a fall. Doctors did not initially expect him to recover from this accident. Along with the health challenges he faced personal issues â€" e.g., he went through his 3rd divorce in 1934. Shortly after the end of this marriage he legally challenged the settlement stating his mental state from the heart attack had influenced him to agree to certain terms of the divorce which impinged his rights to his own creative work(s) â€" past, present and future. 1936 is the same year the structural modifications, referred to in an earlier post by ronp, took place at the Garden Theater. If â€œtheâ€ famed Oliver Morosco was the driving force behind this renovation effort, the events in Mr. Moroscoâ€™s personal life during this period would help explain why he did not continue to have an active presence at the location. (These details were gleaned from various L.A. Times archival articles pertaining to O. Mitchell/Morosco. Dates: 9-6-34, 1-15-34, 7-24-36.)
The South Gate Guild continued to present live theater events at the Garden Theater during this period as remarked by a previous commentator. A playwright/director, Raymond Lee, is mentioned as being involved with live theater productions during the 1930â€™s at the Garden (L.A. Times â€" 10/22/39). This presents another identification challenge â€" is this the same Raymond Lee who worked with Charlie Chaplin as a child actor and went on to write for the San Fernando Valley issue of the Los Angeles Times as an adult?
Again, documentation supplied by the Los Angeles Times, March 28, 1949, furnishes this information: On March 26, 1949, Mr. William Lanier (W. L.) Allen, described as a 54-year-old theater operator, committed suicide. A first responder to the scene, found a note that included instructions to an unnamed brother about running a theater operation. Along with the note, payroll checks for his theater employees were found. Perhaps this incident was the beginning of the rumor about the Allen building being haunted.
There are at least 3 different names associated with this theater, i.e., Garden Theater, South Gate Theater, and Allen Theater. Exact effective dates for the name changes still remain elusive. (I say at least 3 since I have not been able to discover where the South Gate Avon Theatre (previously recorded as having been associated with the Allen Corp.) once stood and/or stands as the case may be. Perhaps the Avon, or, the Gem for the matter, eventually resulted from the project known only as â€œClass A Theater – Architect George Burnettâ€ as posted by Joe Vogel, 11-22-04.
With respect to Joe Vogelâ€™s observations and input, per Wikipedia not only was John C. Austin an important architect. He was an influential civic leader. His civic duties included serving as the President of the California State Board of Architectural Examiners and being a member of the National Labor Board responsible for labor disputes in Southern California.
Thanks to everyone for the various insights and photos provided above â€" theyâ€™ve all greatly contributed to my understanding of the theaterâ€™s history.

Saraswati8’s comment makes it clear that the Allen could not have been the theater designed by George Burnett and Evan Jones in 1930, as it was opened as the Garden Theatre in 1924. The 1930 project was most likely the Avon Theatre, which was on Long Beach Boulevard at Santa Ana Street, according to this comment by millermike on the Teatro Los Pinos page.

The 1936 remodeling job designed by Clarence Smale was certainly done on the Garden/Allen Theatre, though, and that is the most likely date at which it would have been renamed the South Gate Theatre. It became the Allen Theatre sometime after November 1, 1943, on which date it was still being listed as the South Gate Theatre (comment earlier in this thread by kd6dkc on August 29, 2009).

I lived a block away from the age of 4 to 7. We used to go every Saturday afternoon. 2 movies plus a serial in between. All for 35 cents.

the Allen theater,for 25 cents,2 movies-good cartoon,and i remember they would raffle a bike in-between movies,can’t remember if we kids played bingo.the house would be packed with kids. lights would come they’d roll the bike out front.must of been 1961-3,all the movies were general.plenty of work general motors Firestone,always hiring. a pleasant time in South Gate

The Allen is (thankfully) no longer purple. It’s is back to a shade of white. It is currently being used to host art exibits. It appears that the interior has been gutted, but the current owner would not allow any photographs once inside.

I grew up going to that theater in the late mid 80’s. The sun report would give us free tickets for working being paper boys. We would go to cousimanos pizza place which was crossing the side street passing zizzler on the corner.. ahh the memories..

After Allen, the following owners had trouble with zoning and distribution practices as well, and testified at the U.S. Senate hearings of 1953. Taking over circa 1946, the new owners were Albert Hanson and son Wayne Hanson, South-Lyn Theatres. They also had the Arden and Lynwood Theatres (both acquired March 4, 1947) and closed the Lynwood in July 1950. The Circle and Nubel theatres in Bellflower were acquired Oct. 1, 1947. The Circle was closed July 23, 1950; the Nubel was remodeled in 1949.