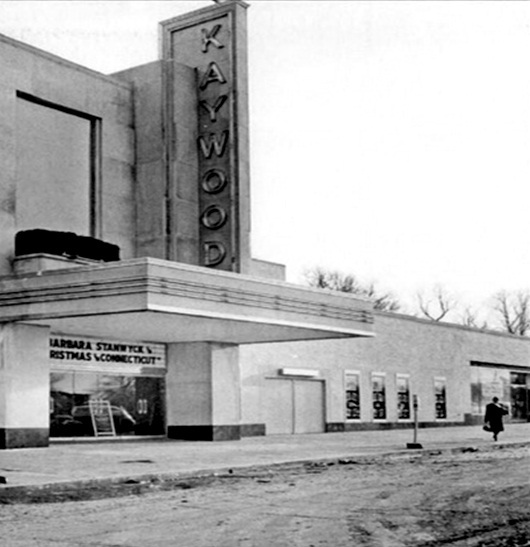 The Kaywood Theatre was opened December 26, 1945 for Sydney B. Lust. The exterior is faced with Indiana limestone and features a square tower with the theatre name. Seating was provided all on a single floor. There were large allegorical mural located on each side of the proscenium opening.

The Kaywood Theater closed as a movie house in 1977. It is now a venue for live Christian entertainment, concerts, and educational programs, the New Horizon Christian Faith Outreach Center.

I well remember the Kaywood. As a child I lived at 4230 22nd St. N.E. in D.C. In fact, as a six year old, I can recall the night when the Katwood first opened because the theatre’s neon lights were visible from my house. My friends and I used the Kaywood as our neighborhood flick along with some others in D.C. such as the Jesse,Newton and Village.

The KAYWOOD was the nicest and most architectually distinct theatre in the Sidney Lust chain. The street is Varnum with an A. The KAYWOOD went under as street crime engulfed the neighborhood, still a good place to buy dope or get murdered, but real bad for living. Operating as a Christian church now, just what the neighborhood needs. Plenty of sinners to work on.

There is a photo on this page:
View link

The marquee with the Kaywood name is still there, a rare survival for which the New Horizon Faith Outreach Center is to be thanked.

Here and here are March 2008 photos of the former Kaywood Theatre.

This theatre is listed on the John and Drew Eberson Architectural Records archive at the Wolfsonian in Florida as one of their designs.

Boxoffice featured an article about the Kaywood Theatre in the issue of February 2, 1946. The article says the Kaywood had opened on Christmas Day. It also attributes the design of the theater to Frank G. Ackerman, but doesn’t mention the Ebersons.

“A new theatre seating 1000 will be opened at Kaywood Gardens in Mount Rainier Wednesday at 3 PM (12/26/1945) Mayor Floyd B. Mathias of Mount Rainier and T. Howard Duckett of the Prince George’s Bank and Trust will be among the guests.”

The Kaywood Theatre’s architect, Frank Gail Ackerman, worked as a draftsman in the office of theater architect William McElfatrick, 1911-1916, while studying at Cooper Union. On graduation, he entered the office of Thomas Lamb, where he worked until 1925 as an administrative assistant and specifications writer. He later worked in the offices of noted New York architects Emery Roth and Van Wart & Wein, before becoming a partner in Van Wart & Ackerman in 1933. He established his solo practice in 1940.