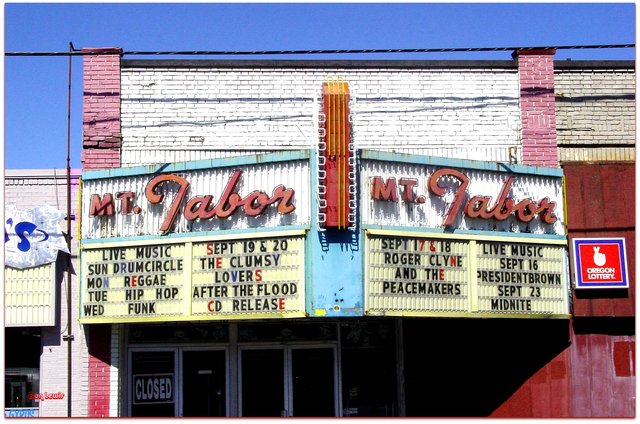 The Mt. Tabor Theater was named after an extinct volcano located within the city boundaries of Portland. It was originally opened in 1914 as the Alhambra Theater, and by 1941 had been renamed Mt. Tabor Theater. It was still open in 1950. Although it closed and fell on hard times, it still displayed the name on the marquee and some unique neon tubing. It is situated across and down S.E. Hawthorne Street from the Bagdad Theatre, which has fared much better.

The Mt. Tabor Theater became the Mt. Tabor Legacy, a concert venue/lounge/pool hall. It also hosts special events such as the Whitewater Film Festival and sporting events shown on the screen. In 2009, it was taken over by new management, booking major acts as well as local bands, and in 2013 was renamed Alhambra Theater again. It was closed in 2016 and became a video arcade and bar.

It would seem that the theater has been sold and is currently in operation.

It looks like they’ve done a great job with the place, although no major-indie artists are listed as playing their shows.

It appears that it is up for sale again View link

Thank you to all who’ve posted to this page. It brings back memories from over half a century ago.

I worked at the Mt. Tabor Theatre as a teenager from 1954 to 1957… Started cleaning up after the Saturday kids' matinee (what a mess!)… Eventually ran the projectors two or three nights a week as well as Saturday…

The theatre was then owned by Carl & Hazel Lowe and Eddie & Sue Boyer. Carl and Sue were brother and sister.

Movies were changed each week with the last showing on Sunday evening. Shortly after WWII the traffic sustained two complete sets of features each week.

Evening format when I was there was: Main Feature – Previews, newsreel, cartoon – Second Feature – Repeat Main Feature. First showing was around 6 pm. End of the evening depended on the film lengths, of course, but generally was pegged to around 11:30 pm.

Control room contained two carbon-arc Motio-Graph projectors and all the toys to keep the system running. Today, OSHA would lock up the owners if they caught a sixteen year old kid running those projectors <GRIN>.

Each feature film was delivered by the distributor on four or five 20-minute reels. They came in steel cans holding up to four reels — maybe sixty pounds apiece — which had to be hauled from street level up a narrow staircase to the projection room.

There are changes both inside and out (Thank you: Lost Memory for the images and links)…

The marquee has been replaced, but the feel and sense of it remains. The upper half “Mt. Tabor” portion is very similar to that of 50 years ago, but the “Attractions” sections have been changed. Then it were three rows of letters, not five and the attraction panel was not split in half.

We used thick, plastic red letters for the wording on each panel. The letters hooked over stiff wire on each side of the marquee. The marquee was changed on Sunday night. The wording for the attractions was laid out in a workshop in the back. Then the letters were packed in reverse order in four wooden boxes and hauled around to the front by way of an alley and the side street (49th). Each box of letters went up a ladder and was placed on the marquee. That was a miserable job on a cold rainy night, so “the kid” got to do it.

The ticket booth was at street level in front where it appears to be now, but there were no security doors and steel fence/gate — times do change. A passerby walking on the Hawthorne Blvd sidewalk could wander into the foyer and check out the posters both for the current attraction and the next one on the schedule.

Again, thanks so very much to all of you who contributed to this. You’ve given me a wonderful trip back in time.

Hello Mark. The thanks all go to you for the time trip! Anyone who has never experienced the sights and sounds of “real” projection room have really missed out. Do you happen to have any photos pertaining to the theater?

Thank you for your very kind comments.

Not sure about the photos… Will have to look in boxes long ago packed away from my folks' estate… Sometime after the first of the year when we put away our Christmas trim, will make a point of looking in storage…

Oh, yeah… The sights and sounds of a projection room… I suppose now one would have to wear ear defenders to work around that much noise.

Some additional nostalgia… The carbon-arc projectors generated a tremendous amount of heat so that if the frame gate in front of which the film passed got stuck or the film “hung up” in front of it, the film would break or burn through. Even the teenager learned how to a splice film on the fly in less than half a minute. It was so frequent, we had a set of “billboard” frames that could be run from a small side projector to announce, “Technical difficulties.”

My projection experience is now over half a century old, but I still cannot go to a movie in a theatre without seeing the pair of blips in the corner of the screen to announce the switchover to the next reel… Can be really distracting… And, yes, we did park a nickel in the film reel to drop when the switchover got close. There was an alarm bell on a governor run by the spinning reel, but it only took one missed changeover because the governor did not move fast enough to ring the bell to believe in the nickel.

Once, the owners ordered an original print of “Gone With The Wind.” That was printed on pre-WWII nitrate based film. The concern for fire was so great that not only were all three of us in the projection room during each showing, but also the fire department did an inspection of extinguishers, exit lighting, doors and the like ahead of every showing… THAT was exciting… It was great publicity as the whole preparation was reported in the newspaper ahead of the showing.

The website for the current incarnation of the Mt. Tabor Theatre says that there is a 10' x 10' projection screen in the main auditorium. That seems tiny compared to the original 30' x 40' screen. I can recall when the owners broke down and spent the money for a CinemaScope screen and lenses. For them it was a huge step to try to keep up with other theatres in the area. The first film we showed in CinemaScope was “20,000 Leagues Under the Sea” with James Mason, Peter Lorre and Kirk Douglas.

Those screens had a large number of holes in them to permit the sound to pass through to the audience. What most folks may not realize is that there was a sufficient number of holes that one could stand behind the screen while a movie was running and clearly see and identify the people in the audience in the reflected light. Perhaps that is still the case… Been a lot of years since I’ve been behind a screen during a showing.

Again, thanks so very much.

I worked an event there recently that involved DVD cues. It appears that where the booth was is where their kitchen now is. There is no film projector but one of the ones that can be connected to a DVD/VHS player and only one of the projection windows are not covered up. They have DVD & VHS players stacked in the office about 20 feet from the window so you have to put in your DVD then run over to the window to see if it’s playing correctly.

For the screens, I think that there is an smallish one in the “sideshow” lounge. I was working a show in the main room they have a small square screen to the left of the stage which can’t really be sceen but the audience. We used a pop up, slide show style screen. It was small but at least people could see it!

Also, I think that the booth that I was in was not the original but was for the two screen version of the theater. My mom went to the theater as a child in the 50s-60s and she said that the stairs that lead to the booth/kitchen area were the balcony stairs which makes sense because there is an identical set across the hall from them which currently lead to an office.

Where would I be able to find more pictures/articles about Alhambra Theater? Also, any old photos of the theater in general are wanted! Please email me if you have any information about the theater. Thanks!

Status should be closed. This theatre has been converted to a video arcade and bar.