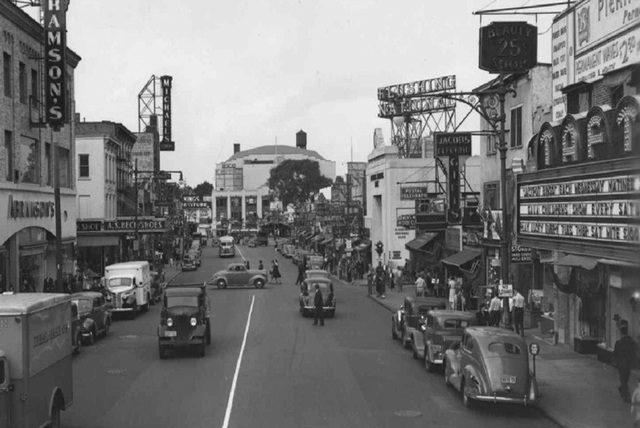 The Flushing Theatre Theatre was one of the first movie theatres in downtown Flushing, Queens, and dated back to 1917. On December 31, 1931 it was renamed Taft Theatre. In 1938 it was renamed the Town Theatre. It was operated by the Century Theaters circuit, and then by the Springer chain in its final years.

Changing programs twice a week, the Town Theatre played the same double bills as its nearby competition, the RKO Keith’s Theatre and the Prospect Theatre, but several weeks afterwards. It was closed in 1955 and was demolished to make way for a W.T. Grant variety store, which in turn has since been demolished.

The Springer Circuit took hold of many Century operations, some that were being disposed of permanantly like the Town, Community and Plaza in Queens and the Patio, Linden (formerly Ward And Glynne’s Century), Farragut in Brooklyn. They also ran the Midwood and Oceana and when they went out of business, the last two reverted back to Century. Springer ceased to exist after 1964 or so.

Were all of their houses end of the run?

I have a nice photo of the taft i will post on here as soon as i get the chance. Warren, sine you seem to be THE theater guy around here, maybe you can help me out. I have a book on early queens and it shows a theater called the Janice that was also on main st. Was this the location of the Taft/Town, the seem to be in the same location in the pics. Thanks

Here’s another image of the Taft from the 1930s:

When I was a child my aunt took me to Flushing. I remember walking past the Town. Even then I was a theatre nut. Does no one have pictures of the theatre as the Town? Also, I posted similar information to this a year or so ago but it has disappeared. Anybody else experience this sort of problem?

My great uncle (my maternal grandmother’s brother) was Joseph Springer who owned the Midwood from the late 50’s into the 60’s. He also owned 5 other theaters some in Brooklyn and the rest in Queens. I saw the American Masters show and also heard Woody Allen mention that his grandfather owned that theater. Either he sold it to Century Circuit or directly to my uncle. I used to live on Coney Island Avenue and Ave. J (across Coney Island Ave. from Bobbins). Of course I used to have a family pass and see movies free whenever I wanted.

The Flushing was re-launched as the Taft on New Year’s Eve, 1931, according to posters displayed in this vintage photo of February, 1932

You look at the overview and all three theaters mentioned, as well as the W.T. Grant’s which was built on the site of the Town, are gone. It’s also interesting that Century built the Prospect and leased it to Loew’s and then operated it in the final years. May have actually been a bit of an overlap with the Town. Then in the 1980’s when RKO Century Warner was created they operated both the Prospect and the Keith’s.