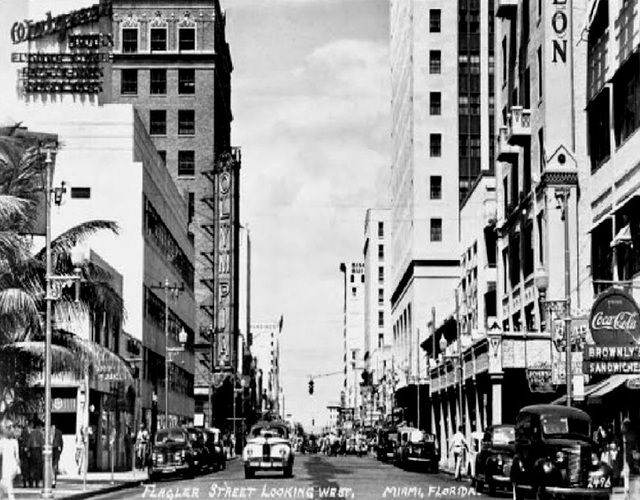 Originally the site of Miami’s first Hippodrome Theatre & Airdome. Built in 1926 by Publix Theaters Corporation and designed by John Eberson, the Olympia Theatre was the first of many Atmospheric style theatres, and was the first air-conditioned building in the South. It was equipped with a Wurlitzer theatre pipe organ. The Olympia Theatre was opened on February 18, 1926 with Adolph Menjou in “The Grand Duchess and the Waiter” on the screen accompanied by the Olympia Symphony Orchestra and the ‘mighty’ Wurlitzer concert pipe organ. Paul Whiteman and his greater concert orchestra also appeared on the opening program.

The ‘talkies’ and vaudeville soon arrived at the Olympia Theatre, and for more than 40 years the theatre was the number one entertainment center in Miami. It was one of the last theatres in the country to showcase vaudeville acts. After years of showing films, the former Olympic Theatre was purchased in 1975 by South Florida business tycoon and philanthropist Maurice Gusman, saving the aging theatre and adjacent Olympia Office Building from demolition. It was donated to the City of Miami and became home to the Miami Philharmonic Orchestra.

Throughout its history, the Olympia Theatre has been host to the world’s most exciting performers in the arts and entertainment community. Cultural icons such as Elvis Presley, B.B. Kings, Luciano Pavarotti and Etta James have proved memorable evenings under the theatres twinkling ‘stars’. The theatre has also hosted today’s best-known pop stars and is a favoured venue for MTV concerts.

Renamed as the Maurice Gusman Cultural Center, extensive restorations in the 1970’s were overseen by famed architect Morris Lapidus, and the theatre was named to the National Register of Historic Places in 1984.

Time continued to take its toll on the theatre however, and by the late-1990’s virtually every structural system of the theatre was in need of repair and replacement. The roof had several leaks that had damaged the theatre’s historic paint and plaster as well as the seating and carpeting in the auditorium The HVAC system had to be entirely replaced. Electric, sound systems and plumbing all required upgrades.

Noted restoration architect Richard J. Heisenbottle, AIA, was retained to develop an ambitious, multi-year plan for additional stabilization and restoration work. In order to minimize loss of income for the theatre, construction was planned to occur during only the summer months, when bookings were normally at a minimum. Critical components were broken down into construction segments that could be completed in three months. During the rest of each year, the architectural and engineering team completed plans and theatre management secured funds for the next round of work.

While structural repairs were underway additional projects were launched to make the theatre more attractive to promoters. The stage was enlarged and new lighting and audio equipment were installed. The theatre’s already sublime acoustic properties were left intact.

The theatre owes its distinctive character to architect John Eberson, the master of ‘Atmospheric’ theatre design, and it is one of the few Eberson theatres around the world still standing and in regular use. Restoration of Eberson’s original design scheme, including colors and finishes, was another top priority of the construction plan. Following detailed analysis, decorative painters restored the original, vibrant paint scheme to the decorative plasterwork throughout the theatre. 1970’s vintage plastic seating was replaced with wood and brass seats boasting historically appropriate detailing. Even the new carpeting was custom-loomed to match the 1926 original pattern.

Today (in 2014), as the restoration work nears completion, Miami’s most beloved cultural venue has retained its stature in a downtown that continues its own transformation. High-rise office buildings and glittering luxury condominiums have replaced many of the theatre’s aging neighbors. Downtown Miami is once again becoming a place to live, work shop and play, and the newly renamed Olympia Theatre at Gusman Center is at the heart of the action - just as it was in 1926.

Ellegant, with its star-studded sky-ceiling, when it was a movie theater, the Olympia was the Miami counterpart of the Washington Heights RKO Coliseum. I now see the Olympia was originally a Paramount theater. I saw “Dr. No” there with Sean Connery and Urusula Andress and “How to Murder Your Wife” with Jack Lemmon and Virna Lisi. It has lost much of its grandeur.

The closing never actually took place. It just ran stage shows for a while.

The Olympia celebrated its 90th Anniversary on February 27th, 2016 with a showing of “Dick Tracy”.

Video and article: “Miami’s Most Beautiful Venue Is Getting Its Second Wind“.

Monthly free jazz concerts are held in the lobby.

In 2015 I took a tour of the Olympia. One interesting thing is there’s a collection of signatures of mostly famous performers and politicians who have appeared there on some doors just offstage on the left (from the audience’s point of view) of the stage.

On June 14th, 2015 I toured the Tampa Theater. I mentioned to the tour guide that parts of the interior, like the second floor lobby, looked something like the Olympia. After the tour, before the film began (“Key Largo”, as part of their Summer Classic Film Series), she found me in my seat to tell me she had found out the two theaters have the same architect, then left saying “Now I have to visit Miami”.

An article in the January 27, 1975 issue of Box Office, “Nickel Shows, Live Music, Tents: Miami’s Early Film Days Recalled”, says that someone named Robert K. Andre was “building an ornate self-scale replica of the [Olympia] in a two-story building off Bird Road”.

I wonder what became of this. Has anyone seen it? What was it like? Are there photos?

The Main Library in downtown Miami has a videocassette (VHS) copy of a collection of short documentary films made locally in the mid-1980’s called “A Few Things I Know About Miami” (which I just noticed was first mentioned here by Al Alvarez in his comment dated May 24, 2005).

The first, about 6 minutes long, is called “On Flagler Street” featuring a former manager of the Olympia named Jimmy Barnett describing the heyday of the movie going experience along Flagler street which he feels lasted from the 1930’s to about 1955.

The film includes archival Movietone newsreel footage of the grand opening of the Miami Theater across the street and actor Jimmy Stewart arriving at the premier of “The Glenn Miller Story” at what might be the Miracle Theater in Coral Gables (it simultaneously premiered at the Miami and Carib), as well as historic still photo shots of various theaters in downtown Miami when they were open.

The film ends with Mr. Barnett inviting you to follow him on to the stage of the Olympia where he explains he had worked for 18 years, at one point as “captain of the balcony”, and becoming manager in December of 1950, while we see shots of the auditorium. He says the Olympia also hosted many shows and famous people during his tenure.

Came across this photo of a Miami Transit Company bus in front of the Olympia marquee in I’m assuming 1961 since the original “The Parent Trap” is being shown. The marquee looks larger and more traditional than today’s electronic one:

David, the original HOBO TYPE on the OLYMPIA marquee was the ABC Florida State Theatres' trademark. Just look at the ads from the sixties and seventies.

I hope the future of the Olympia is well.

Miami Herald article from December 28, 2019 about the family of Maurice Gusman trying to get control of the Olympia back from the City of Miami:

“He Donated Olympia Theater to Miami Decades Ago. Now His Family Wants It Back”

And another from the December 10th Miami Today newspaper with links to related articles on the right hand of the page:

“Cliffhanger at the Gusman Meets New and Frightening Peril” 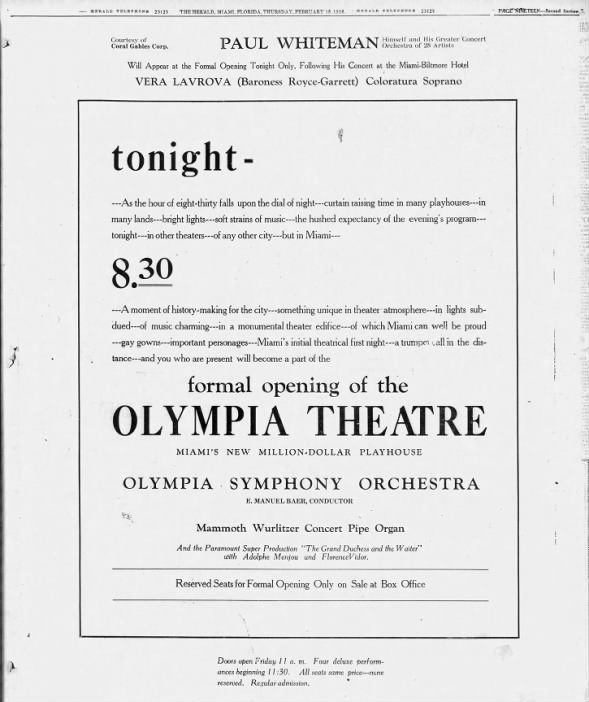