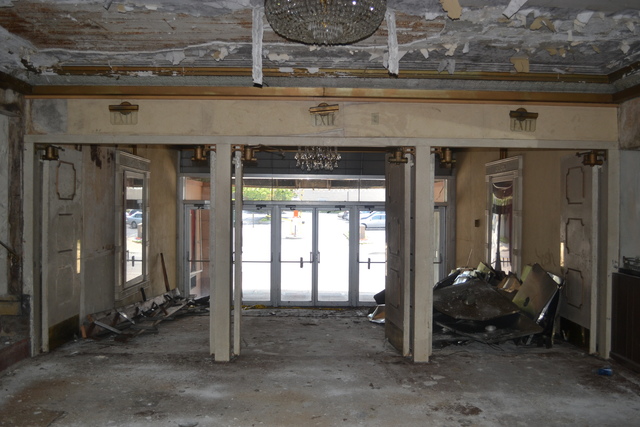 Regent Theatre is located on S. Limestone Street in downtown Springfield just one block up from the State Theatre on South Fountain Avenue. It was originally built as a vaudeville theatre on the site of the Grand Opera House and was opened as the Regent Theatre on August 16, 1920 when it screened Norma Talmadge in “Yes or No” & a Max Sennett comedy “Let'R, Go”. During this period and up to the 1950’s, the office of Gus Sun, a relatively well known vaudeville booking agent/manager, was above the theatre. It was equipped with a Kimball organ. By 1941 it was operated by Warner Bros. Circuit Management Corp.

The Regent Theatre was a single screen theatre with a balcony, which from June 22, 1979 was converted into a second screen and it was renamed Regent Cinemas. The Regent Cinemas was closed by Chakeres in January 1991 and is currently for sale.

The Regent Theatre has had a lot of groups look at it, but sadly, like a lot of Chakeres Theatres, years of neglect before it’s closing, in addition to being empty for over a decade, each passing day gets darker for the Regent Theatre.

The Regent Twin Cinemas, as they had become known at the time, actually closed on January 31, 1992, following the 9:30 PM showing of “Love Crimes” starring Sean Young, and the 10 PM showing of “Juice” starring Tupac Shakur. I still have the Springfield News-Sun article on the closing of the Regent. At current the Regent has sat vacant and in bad disrepair since the January, 1992 closing. A News-Sun article in 2003 said that the building would cost millions to rehab it, and Chakeres commented that “They’re not in the theater restoration business”. Sad.

Took some photos on a recent visit. Looks like it was a great place back in its heyday.

We did too in mid-May 2010. Cool mural on the rear wall. Heartbraking level of disrepair. Pictures on Cinematour.

Sun’s secretary recalls him as a shrewd businessman

(Photo caption:) Ginny Snyder laughs as she stands in front of the giant Gus Sun mural being painted on the back of the Regent Theatre. She was Sun’s secretary in the 1940s.

If there needs to be further justification for the painting of a 6,000-square-foot mural on the back of a downtown building of some guy juggling, try this â€" in 1947, it was reported that Warner Bros. was thinking about making a movie based on the life of that guy.

Sun later said that he wanted Bob Hope to play him in the movie, which wouldâ€™ve been appropriate â€" as the ruler of a vast vaudeville empire centered in Springfield, Sun gave Hope his first break.

Only the movie never happened, presumably because it wouldâ€™ve been a casting nightmare.

Sun also helped the Marx Brothers, the Ritz Brothers, W.C. Fields, Al Jolson, Will Rogers, George Burns, Bert Lahr (the Cowardly Lion in â€œThe Wizard of Ozâ€) and Edgar Bergen (and his puppet, Charlie McCarthy) on their way to fame.

But the biggest, most logical, question remains â€" who wouldâ€™ve played his secretary?

After all, it only seems fair to include the woman who took his dictation, got him tickets every year to the Kentucky Derby, hired bandleader Glen Gray to play his 50th wedding anniversary and addressed all 500 of his Christmas cards.

â€œIâ€™d love to see that address list now,â€ said Ginny Snyder, who worked as Sunâ€™s secretary for close to a decade. â€œIf I looked at the list, itâ€™d all come back to me.â€

At age 84, Snyder is one of the last links (quite possibly the last) to the Gus Sun Booking Agency, the now-defunct theatrical institution that chose Springfield as its home in 1906.

Increasingly, the mural-in-progress on the back of the vacant Regent Theatre â€" home to Sunâ€™s agency from 1920 onward â€" is just another piece of public art dedicated to someone nobody actually knew.

â€œHe loved to talk about the old days,â€ recalled Snyder, who went to work for Sun in 1942. â€œIâ€™d give the world to have the stuff he dictated to me.â€

At the time, it was the twilight of Sunâ€™s dynasty.

â€œWhen I went up there, the vaudeville days were over,â€ Snyder said. â€œIt was the end of an era.â€

Once believed to have been the nationâ€™s largest individual user of telegraph and telephone services, the agency was down to three offices (in Springfield, Detroit and Des Moines, Iowa) from a high of 10.

During the heyday of vaudeville, the Sun booking agency had provided a circuit of 275 theaters with entertainers â€" many of whom became world famous.

According to legend, Sun once visited a Hollywood set and realized that 12 of the 17 people there once worked for him.

But by the early 1940s, the agency had switched to booking acts into county and state fairs.

They were a husband and wife high-wire act.

â€œShe wore pantaloons,â€ Snyder said, â€œso nobody could tell she was pregnant.â€

There were flying acts, dog acts, juggling acts and more.

â€œOne of the most elaborate acts was Will Hillâ€™s Elephants,â€ Snyder said.

The name probably speaks for itself.

â€œThen there were the Zacchinis,â€ she said. â€œThey were the people who got shot out of a cannon.â€

The agency mightâ€™ve just been a shell of its former self, but Sun was still at the helm, although most of the daily work had been overseen since 1930 by general manager Bob Shaw, a former vaudevillian himself.

â€œIn those days, people didnâ€™t think that show people were all that great. I liked them because they were themselves. Show people are just different. They accept you for your face value.â€

And as a hunter and avid cook, Sun could whip up some mean hasenpfeffer (pickled rabbit).

When someone floated the idea of writing a book about Sunâ€™s life â€" like the movie, it never happened â€" he called on his secretary to dictate the details of his life.

A Toledo native, he told of opening Springfieldâ€™s first movie theater in 1904, and how, in order to convey to people that it was a family-friendly endeavor, he parked a baby buggy outside.

â€œHe was shrewd,â€ said Snyder, who still uses shorthand to this day. â€œHe wasnâ€™t educated, but he was shrewd.â€

He talked often of Bob Hope â€" one of his vaudeville success stories.

â€œHe loved to talk about Bob Hope,â€ Snyder said. â€œI used to write to Bob Hope at least once a year. He liked to have that feeling, that he gave him his start.â€

Hope wasnâ€™t the only one â€" Snyder remembers plenty of autographed photos on Sunâ€™s office wall, from the likes of singer Sophie Tucker, bandleader Ted Lewis and Fanny Brice, the comedian whose life later inspired the musical â€œFunny Girl.â€

â€œI was always just fascinated with carnivals,â€ she said. â€œI said I always wanted to work for the circus, and I would have in a minute.â€

True to the mural, by Yellow Springs artist Jason Morgan, Sun might have become a millionaire impresario, but once a circus juggler always a circus juggler â€" even behind closed office doors.

The 1922 book A standard history of Springfield and Clark County, Ohio has this to say about Gus Sun’s Regent Theatre:

“In the realm of Springfield theaters, Gus Sun is easily the dean; he has leased theaters and operated them until he owned them. In 1912 he leased the Grand and in 1917 he purchased it, and in 1919 he dismantled it, constructing the Regent on the site….”

The book also has a bit about the Grand Theatre, the Regent’s predecessor:

“In 1881 the Grand Opera House was built on Limestone Street, on the site of the old Leffel Water Wheel industry. It was built by John W. Bookwalter, with a seating capacity of 1,200, and the advantage of a ground floor and other up-to-date improvements….”

Quite a few sources note that the architect of the Regent Theatre was C. Howard Crane, and that the house opened on August 16, 1920. Some sources also claim that it was built as a legitimate theater that was later converted to show movies, but in fact Gus Sun built the Regent for vaudeville and movies.

Heh. It turns out that one of the sources that attributes the design of the Regent Theatre to C. Howard Crane is a blog at some site called Cinema Treasures. As it appears to be a fairly reliable site, we should probably add that information to this page.

I recently purchased a circa 1925 postcard sent from Hollywood that was addressed to “Mr. Ed Paul, Regent Theatre, Springfield, Ohio”. Would Mr. Paul have been a vaudeville actor appearing at the theatre, or would he have been an employee of the theatre?

This was a direct replacement of the old Grand Opera House, which occupied nearly the same space since sometime before 1886. There was originally a small stream called Mill Run along the south wall, but this was paved over, probably during construction of the new theater. 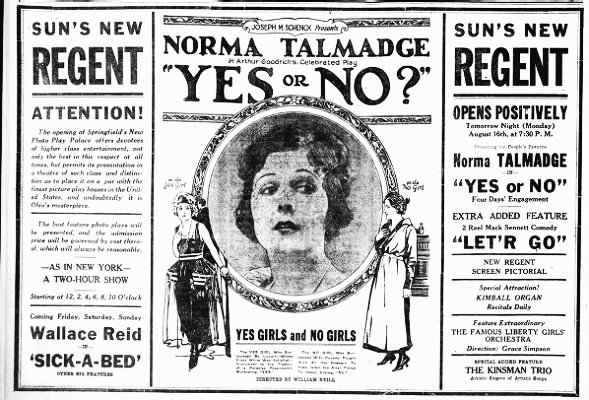