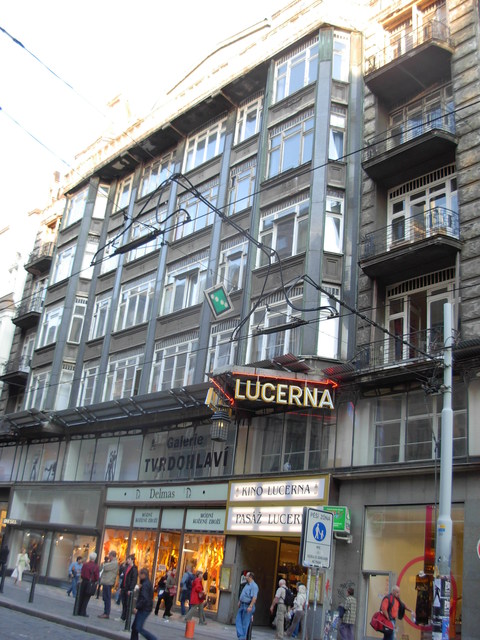 This Prague version of an American movie palace opened on 3rd December 1907, in a stunning mix of various Renaissance styles and Art Nouveau with seating for over 500. It was built for the grandfather of former Czech President Vaclav Havel.

It is the main attraction of the Lucerna Arcade, a hundred year-old collection of entertainment and retail venues. It is also the oldest continuously operating movie theater in Europe and the site of the first showing of a sound movie in Prague. The original auditorium now seats 453 and in 2013 a second screen seating 51 was opened in a space which had originally been the owners private cinema.

The theater premieres first-run Czech and Hollywood films (the American films in English), and is a host venue for various film festivals throughout the year.

The Lucerna Music Bar in the theater’s basement is just that, a bar with cheap drinks and live bands, decorated in faded 1970’s disco-era decor.

I think the word “Hundred” was missed out of the ‘ a year old collection… ’ sentence above!

The cafe is on the first floor with the Kino on the 2nd and 3rd floors of this massive building. It is substantially intact and an absolute gem in the beautiful city of Prague. It would appear to be a marginally older 1st cousin of Amsterdam’s famed Tuschinski Cinema.

I meant to write October, 2006. The balcony is open, the curtain is used before features, don’t miss this wonderful movie theater if you are in Prague! and enjoy the large bar that’s upstairs after the lobby and before the auditorium.

I went there this past summer while studying at FAMU (The Film Academy in Prague). The theater is amazing, and I can’t wait to return. I saw Bathory there, a Czech block buster, which is probably one of the most expensive films in czech film history.

During a visit to Prague in June 2017 I saw “Lady Macbeth”, starring Florence Pugh (in English language, with Czech subtitles), at this magnificent cinema – which appears to be even older than mentioned above, with its website saying that it opened on 3rd December 1907. (The year is corroborated by the inscription on a bust of founder Vacslav Havel.)

The main auditorium currently has 453 seats, and is equipped with 4K digital technology, with 3D capability, with Dolby Surround 7.1 sound.

A second auditorium, seating 51, opened in 2013. This occupies space that was, some 70 years ago, the owner’s private cinema. This is equipped with 2K digital projector with 3D projection and Dolby Surround 7.1 sound.

was inaugurated on 3. 12. 1907, this year it celebrates 108 years of its existence and is one of the oldest cinema halls still in operation across Europe and the world. During this incredibly long time, tens of thousands of movie titles were shown on the cinema screen of this prestigious cinema, which is an integral part and decoration of the Lucerna Palace, millions of viewers sat in the seats and hundreds of movie stars stood on the stage at grand premieres of their films.

Currently the cinema hall has 453 seats, it is equipped with cutting-edge 4K digital technology also enabling 3D projection, with Dolby Surround 7.1 sound system and it is the most visited classic cinema in the Czech Republic.

welcomed its first audience at the end of 2013. The premises in which it was created have a very interesting history – more than seventy years ago, there used to be a private screening room of the co-owner of the Lucerna Palace and the founder of the Barrandov studios Miloš Havel (the uncle of President Václav Havel and his brother, a scientist, Ivan M. Havel). The hall had served primarily for private previews of films produced under brand of the production company Lucernafilm, or for private screenings accessible only to the closest friends of the owner. As far as we know, there had never been screenings organized for the general public. After the nationalization the hall was closed and the premises were structurally divided into several smaller rooms.

We are honored that in these historic premises we can currently operate a small cinema with a capacity of 51 seats, with unconventional decoration with portraits of leading Czechoslovak, European and international filmmakers and actors, including the portrait of Miloš Havel at the seat of honor in the middle of the first row. The hall is equipped with 2K digital projector with 3D projection and Dolby Surround 7.1 sound system.