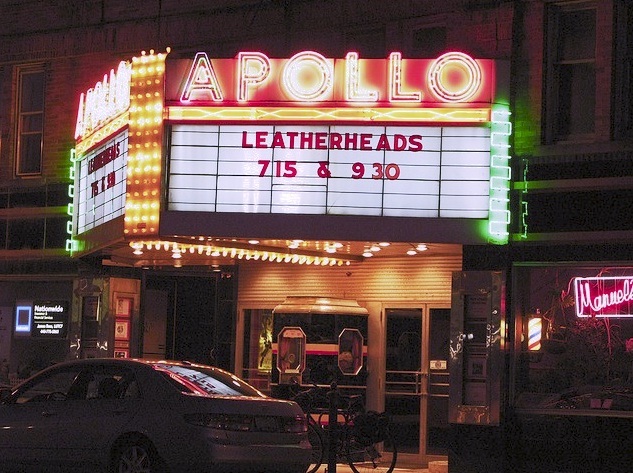 Opened in 1913, the Apollo Theatre in Oberlin is a local tradition. It is the only theatre that I know of in the area with both a marquee out front and a curtain that they actually open and close between movies.

This single screen Ohio theatre sounds like a real gem and one worth seeing in anyone’s theatre travels.

According to the Oberlin Heritage Center, “The building complex that the Apollo Theater is a part of was built by William Hobbs in 1914. George Broadwell, the man who built the first modern gas station in Oberlin, was the first owner of the theater. ‘Thor, Lord of the Jungle,’ was the first motion picture shown here. After Broadwell sold the building to Ira West in 1917, there were several owners before the Steel family took over the theater in 1928. Jerry Steel, a Cleveland native, fought with the American Army in France during WWII, managed Alhambra Theater in Cleveland for a time, and worked as a distributor for Warner Bros. before coming to Oberlin. Under his direction, the theater flourished through the depression years, and was enlarged and modernized. In 1950, the theater gained its now famous neon, triangular sign. The Steel family continues to own the theater.”

Apparently the theater is now up for sale. What’s the asking price?

Funding for the purchase and renovation of the Apollo was provided by
generous support from Oberlin alumni, friends of the College and local
community members. Donors include the Steel family, famed television
director and Cheers creator James Burrows ‘62, and his wife Debbie
Burrows, the Goldring Family Foundation, Oberlin College Board Chairman
Robert Lemle '75, the Nord Family Foundation, and an anonymous Oberlin
High School graduate.

Known for its distinctive ambiance, eclectic selection of motion
pictures, and reasonable ticket and concession stand prices, the Apollo
Theater is beloved by generations of Oberlinians. The brick theater was
built by William Hobbs in 1914. Its first show featured Thor, Lord of
the Jungles, a three-reel, silent thriller starring silver screen
pioneers Kathlyn Williams and Tom Santschi. In the Apollo’s early days,
live musical and vaudeville acts were presented on its spacious stage.

Jerry Steel, a film distributor from Cleveland and father of the current
owners, purchased the Apollo Theater complex, which includes commercial
and residential space adjacent to the theater, in 1928. That year, the
Apollo screened the first “talkie,” or sound film in local history.

The theater was remodeled in 1950 in “Zig-Zag Moderne” style. Its
distinctive triangular marquee with traveling neon lights was added,
along with a faÃ§ade of gleaming black and red Vitrolite tile, and
interior walls of padded vinyl and glossy crimson velveteen.

“The Apollo adds so much to our quality of life. Going to the movies at
the Apollo is a great Oberlin and Lorain County tradition,” said Marvin
Krislov, president of Oberlin College. Mr. Krislov said that as a member
of the Oberlin community, the College has an obligation to preserve
important cultural assets and enhance the town’s quality of life.

“Our hope is that the Apollo will become more than just a movie
theater,” Mr. Krislov said. “We would like to see it become a venue for
showcasing the wealth of theatrical, artistic and musical talent that
thrives in Oberlin. We also see it offering exciting new opportunities
to students and faculty in our Cinema Studies and theater programs.”

The first phase of renovations bringing the theater in line with
building codes will be done this summer in partnership with local
businesses and other interested parties. The Apollo’s grand re-opening
is expected to take place in fall 2009.

While the Apollo will continue to be a working movie theater, the second
phase of the project includes transforming the theater into a new
performance space as well as a venue for community events.

To support the second phase of the project, a Friends of the Apollo
organization with local and national members has been formed. It
fund-raising activities will benefit the theater’s ongoing and future
programming and educational outreach activities.

“The Apollo is a truly vital part of the Oberlin area’s history and
contemporary life, and the case for preserving it was compelling,” said
Robert Lemle. “It is important given the difficult economic times that
the College was able to fund the purchase of the Apollo and its initial
operating expenses entirely through private gifts. That reflects how
important the theater is to the greater Oberlin community.”

“The theater is a key part of the Downtown Oberlin National Register
Historic District,” said Pat Murphy, executive director of the Oberlin
Heritage Center, the local historic society and historic preservation
organization. “It’s amazing we still have such a wonderful, historic
movie theater that has been the centerpiece of our downtown,” Murphy said.

Unfortunatly, the Apollo was recently ‘renovated’. They stripped away everything that made it special and unique. Now it looks just like any other modern theater inside. It’s really sad…

Thee Vitrolite exterior, though, has been cleaned and restored: View link

What’s going on with this theater? I drove by recently on the way home to visit my family and the marquee was gone and it appeared closed but had some sort of construction going on. Is it being remodeled? I was afraid it had closed and was being turned into something else. I used to go there a lot when I was home from college. Was the only theater for many miles around that booked foreign films…….