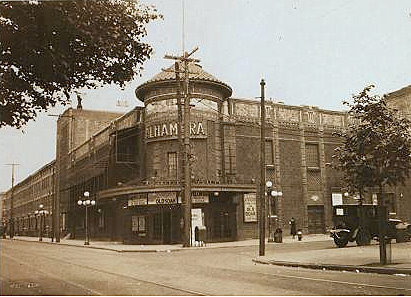 Situated in the Bushwick section of Brooklyn, the Alhambra Theatre was originally a vaudeville theatre operated by the Glynne & Ward circuit. It opened on December 31, 1914, and was designed by Arthur G. Carlson of the architectural firm Carlson & Wiseman and had a seating capacity for 1,500. In 1918, it was enlarged, with a balcony added, and the seating capacity became 2,200.

In 1923, when Loew’s Inc. acquired Glynne & Ward’s Astoria Theatre in Queens, it also took over the Alhambra Theatre and ran it for a few years, but with movies that were at the end of their circuit bookings. It was remodeled in 1927 by noted theatre architect Thomas Lamb.

Loew’s eventually leased it to various “indie” owners, including Randforce Amusement Corp, the Alhambra Theatre ceased operation in 1951. After laying unused for several years, it was announced in December 1959 that it would be converted into a supermarket, initially operated by Safeway. It was used as a day-care centre for many years. In late-2014 plans were put in force to convert the building into apartments.

Astyanax, I think you are referring to the FOLLY Theatre, which once graced the corner of Graham Ave. and Debevoice St. In looking at photos of the two theaters, one does notice a slight resemblance. However, they were the work of different architects – Dodge and Morrison for the Folly and Carlson and Wiseman for the Alhambra.

While I am at it, thanks site manager for changing the Alhambra’s capacity figure so promptly.

The Wyckoff Heights blog, which in 2013 reported that the old Alhambra will be converted into housing, has now printed a rendering of what the new residence will look like. (You can access this site at wyckoffheights.org) It will now house 38 apartments – instead of the 24 previously reported; the rendering also seems to indicate that a third floor will be added to it – hence perhaps the increase in apartments. A 2015 opening date is also provided.

While the facade, which currently features almost none of the old movie house’s ornamentation, will be modernized, the current building will be retained. And the rounded tower at the corner will still be with us. By the way, the name of the new residence will be the Alhambra Theatre Apartments.

A real nice project for the area. While none of the original exterior of the building still remains anyway, and am pretty sure very little if any of the interior of the old Alhambra, this does improve the building, while still keeping a small hint of it’s former purpose as a theater. A win for everyone.

Bway, I guess the one thing that was NOT a win was the loss of the day care center, a badly needed facility, at this location. Hopefully, an alternate site has been identified, though – in this rapidly gentrifying area – I have my doubts. In any event, the current use as a day care center noted at the top of the page needs to be changed.

I passed by the site yesterday. Construction has very much commenced on the new Alhambra apartments site. It looks like this will be a very interesting restorative job – a great homage to the past. Too bad the old day care center was swept to the wayside.

Visiting Bushwick on President’s Day, I was able to pass by the old theater. The renovation is just about complete and it looks like people should be moving in pretty soon. While lighter colors than the original cover the façade and – unfortunately – the roof over the tower at the Halsey/Knickerbocker corner has apparently not been restored – overall they did a very nice job of restoration. This new residence will add a lot of class and elegance to this rapidly gentrifying part of Bushwick.

Wow, if you click on street view above, you can get a fairly recent image of what it looks like. Nice job!

Here is a stunning old photo of the Alhambra from the NYC 1940’s archives. I believe the address above is incorrect, as the NYC site says it is at 797 Knickerbocker Ave, as when I tried to search for 783 Knickerbocker, just a normal tenement building came up